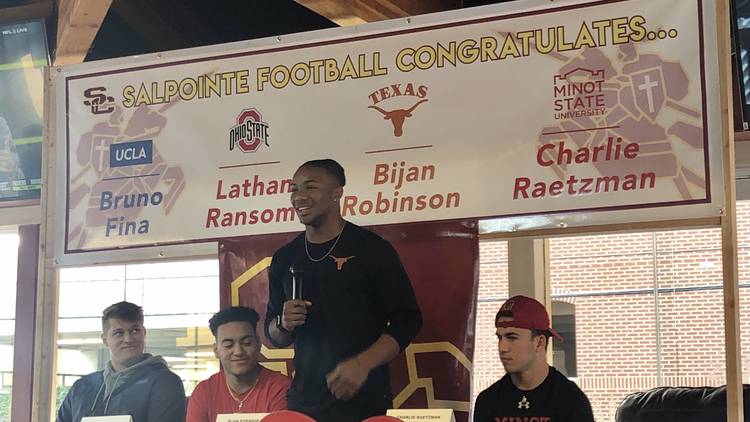 Tucson (Ariz.) Salpointe Catholic running back Bijan Robinson signed with Texas Wednesday as a part of the Longhorns' 2020 recruiting class. The 6-foot, 200-pound prospect rushed for more than 2,000 yards in each of the past two seasons. [Jake Anderson/for Statesman]

It’s a competition to win over the best players of the future in the constant pursuit of lifting the game’s great prize, a national championship.

Wednesday proved to be a rather victorious day for the Texas faithful, as five-star running back Bijan Robinson — the country’s No. 2-rated running back, and one of only five five-star backs in the 2020 class — signed with the Longhorns.

“It’s a blessing to announce that I’m going to Texas,” Robinson said after the announcement.

“God brought me this far, and this is just the next step in my life,” he added. “There’s still a lot of great things to come. Me signing to Texas is definitely a blessing for me and the family.”

Robinson is the only five-star recruit of Texas’ class, making him the school’s top recruit. Three of those other five-stars also signed on Wednesday — DeMarckus Bowman (Clemson), Chris Tyree (Notre Dame) and Tank Bigsby (Auburn). Galena Park North Shore’s Zachary Evans, the top-rated back in the country, will wait until national signing day in February.

“Obviously I can come in right away and make a big impact on Texas,” Robinson said.

“I feel all the recruits there are very talented, but a five-star does mean something I guess to a lot of people,” he said. “But for me, I look at it as more of being in a leader state of the class, and know all my guys coming in there, we just have to get to work. But that five-star, you have a lot of expectations in the future.”

Robinson also was recruited by the likes of Alabama, LSU, Ohio State, Oklahoma and Texas A&M, to name a few. So why Texas? Especially when three of the those schools are currently in the College Football Playoff and the Longhorns are 7-5 heading into the Alamo Bowl.

“If you know coach Drayton, you would understand. He’s just a great, great man,” Robinson said. “He’s a man of God. And how he develops running backs, his years in development as a running backs coach and his philosophy of being a great man but then dominating on the field. It was just a perfect match for me and him to get together.”

Texas, of course, already has running backs on the roster. Keaontay Ingram led the team in rushing and will be a junior next season. Roschon Johnson, a freshman, moved from quarterback to running back and ably backed up Ingram. Another freshman, Jordan Whittington, was a five-star athlete in the 2019 class but missed virtually the entire season with an injury.

“It’s the big picture,” Robinson said. “You have to look at what we can accomplish and what we can do next year, the year after that. I just feel with this class coming in, I have a lot of confidence. I want to stay true to my commitment. If I commit to that school, I want to stay committed to that school because I know what God has in the future plans for us. They did have an off year with a lot of injuries, but when everybody comes back and everybody is ready to go, then it’s a different team.”

Robinson is the second straight top recruit from Arizona that Texas has snagged. The Longhorns signed Scottsdale wide receiver Jake Smith in the 2019 class; he finished fourth on the team in receptions and tied for the second-most touchdowns.

“We talk all the time,” Robinson said. “We talk everything about Texas — about how’s he’s progressing, how he likes it a lot. We always talked before that. … So I feel that’s just making each other better and how we’ll win games and how we’ll win championships. With him, he’s a great kid with how humble he is and how hard he works. It’ll just make me better in the future.”

Robinson will not be enrolling early, as Salpointe Catholic High School does not allow early graduations. But there shouldn’t be reason to worry. The same was true for Smith last year. And rest assured, Robinson is eager to prove he belongs at the collegiate level right away.

“I just know I have to come in there and work hard,” he said. “There’s still a lot of great running backs that go there. I know a lot of people expect me to be there right away, start right away. Any kid has to work hard, I don’t care who you are. You still have to make a presence and love competition when the days keep going.”