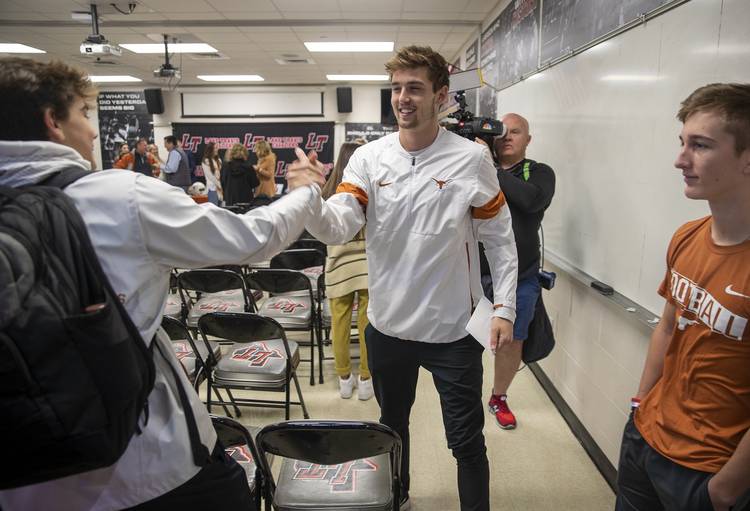 Of the 16 players signed by Texas, eight will be on campus at the beginning of next year. Those players will go through spring practices and Herman noted that “We’ll get to start working with those guys in January.”

During the last two recruiting cycles, Texas signed 19 players who enrolled early. Quarterback Sam Ehlinger was one of only three early enrollees in Herman’s inaugural class in 2017.

Lake Travis quarterback Hudson Card, the first 2020 commit and the Herman-dubbed “the face of the class,” will enroll early. As will offensive linemen Logan Parr and Jake Majors. Joining them this spring will be receiver Troy Omeire, defensive linemen Vernon Broughton and Sawyer Goram-Welch and defensive backs Jerrin Thompson and Xavion Alford.

Texas typically does not play true freshman on the offensive line. UT also has an experienced quarterback in Ehlinger. The other early enrollees could quickly find some playing time on special teams, though.

“We want them to come in, especially those early guys that have had an offseason under their belt and six more months with (strength and conditioning coach Yancy) McKnight. We expect those guys to be ready to contribute in the fall,” Herman said.

Brown has been cleared for physical activities and is doing some modified workouts. Herman said that Brown continues to attend speech therapy and did well in his classes this semester. According to Herman, Texas is playing it “month by month” with the Georgia native.

Herman said that Mpagi was released from an area hospital this week and will return to Houston to recover. The hope at Texas is that Mpagi will be back in class this spring. His playing status, though, is “so far removed from our thoughts right now, being the severity of his heart issue.”

On Wednesday, Herman didn’t have an update on sophomore receiver Joshua Moore since his legal status is still unresolved. In August, Moore was arrested and charged with the unlawful carrying of a weapon. He has been suspended this entire season.

Incoming running back Bijan Robinson has five-star expectations for Texas, too