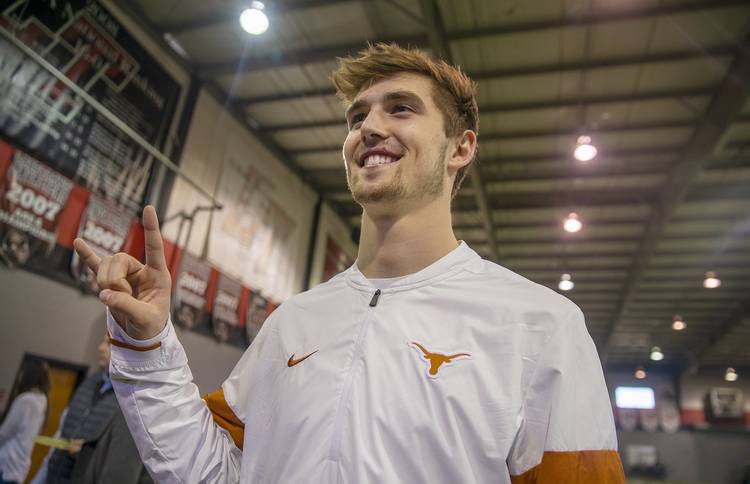 Hudson Card poses for a photo after signing National Letters of Intent to The University of Texas on Wednesday, Dec. 18, 2019 [RICARDO B. BRAZZIELL / AMERICAN-STATESMAN]

“When we sat down as a family and talked about it, is there anywhere else you would rather go than the University of Texas?” his father Doug said. “None of them even came close.”

Card was born in the Houston area, raised in Cypress and moved to Austin before starting high school. He’s been to more Longhorns games “than I can count.”

“I’m just blessed to have a lot of people in my life that support me and they got me to this point, but I couldn’t be more excited to finally make it official,” Card said after a signing ceremony at Lake Travis.

Card was the first commitment in UT’s class. He was offered a scholarship in April 2018 and committed the next month.

Coaches didn’t waiver on their commitment when he missed a good portion of his senior season with a foot injury. Card didn’t waiver on his when Texas coach Tom Herman shuffled his staff and demoted offensive coordinator Tim Beck on Dec. 1.

Herman has yet to hire a new offensive coordinator. For most athletes, it’s not a big deal who calls the plays. It is for quarterbacks, though.

“I trust Tom Herman and what he does,” Card said. “I’m not worried or anything like that. I know he’ll bring in the top guys and I trust who he gets. Like I said, I couldn’t be more excited to sign and I have no second thoughts or anything.”

Card’s unwavering belief in the Longhorns and Herman is a case study in what recruits should be considering during this process. Recruits are signing to play for the school and the head coach. Assistants will always come and go.

Herman said last week he’s been telling recruits the same message. To think one athlete is going to play for the same assistant coach his entire career, “that’s probably not going to happen in today’s college football,” he said.

Lake Travis coach Hank Carter said even rock-star offensive coordinators after a few years “are going to get a head coaching job anyway.”

Texas coaches cannot rewrite history. The program has been bashed over the years for missing on Austin-area quarterback recruits. Landing Sam Ehlinger from Westlake and now Card will start to change that narrative.

Going into next season, Texas has Ehlinger, sophomore-to-be Casey Thompson, Card and Jackson all on the roster. Roschon Johnson, who moved to running back as a freshman, has said he wants to go back to quarterback in 2020, too.

Card threw for 6,428 yards, 80 touchdowns and 12 interceptions during his high school career. He will enroll at UT this January, allowing him to go through spring practice.

He needs to learn the playbook and learn how to eat. Card said he currently weighs 183 pounds and wants to get into the 210-215 range. He also can’t wait to start learning from Ehlinger, who will be a senior next fall, and putting himself in position to lead the Horns.

“Yeah, he’s an awesome dude,” Card said of Ehlinger. “We text here and there and he already gives me advice. I know I’ll be in good hands with him. I’ll learn a lot from him. And I’m just excited to get on campus.”

The Dotted Line: Four future Longhorns are one win away from state title rings