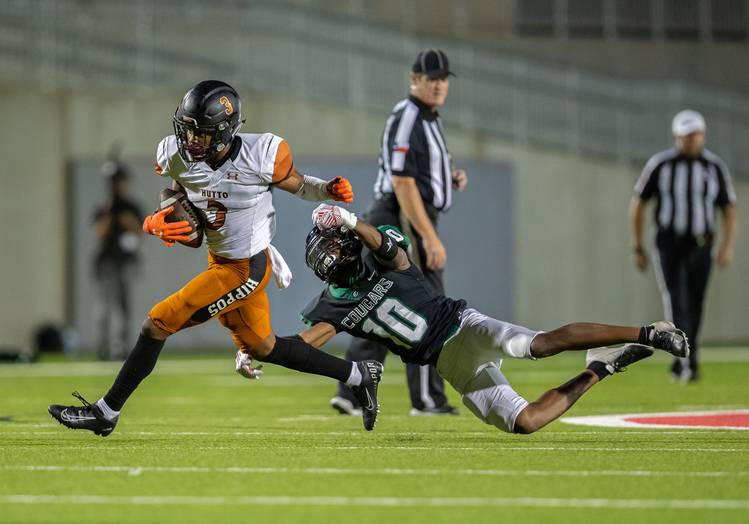 HUTTO — For a while now, Dajon Harrison has been a Hippo. Starting next fall, the Hutto senior will be a Longhorn.

But after signing with Texas on Wednesday, Harrison described himself as a unicorn.

Harrison, a 5-10, 170-pound wide receiver who expects to be used in the slot, says he’s one of a kind. He has replaced the name on his Twitter bio with a unicorn emoji. “I don’t see nobody as being as good as me or better than me,” he said. “I’ll always work to be the best, no matter what anybody says or anybody thinks. Me being the unicorn, it’s just like, I don’t care what you think, I’m going to be me.”

The three-star prospect isn’t likely one for comparisons. His head coach, Brad LaPlante, had one, though. LaPlante, who has nearly two decades of coaching experience at the high school and junior college levels, believes Harrison is the only player that he’d place in the same sentence with former Hutto receiver Davion Davis. Davis shined at Sam Houston State before joining the Minnesota Vikings’ practice squad this season.

“That’s a big credit to Dajon, to have that compliment be compared to him,” LaPlante said.

Harrison, who’s a cousin of former Texas star Jamaal Charles, recorded 41 receptions during an injury-shortened senior season. He averaged 20 yards per catch and scored 10 times on offense. LaPlante lauded his ability to break tackles and create space on the field. Texas coach Tom Herman noted that the Longhorns had signed a versatile prospect who can play on offense, defense or special teams.

“I see (Devin) as being a role model to me, but I feel like I can do better than him,” Harrison said. “That’s going to be my mentality going into it: I’ll do better than the next person ahead. Just seeing what he did and knowing what I can do is what’s going to really push me to be great.”

Harrison held scholarship offers from more than a dozen schools and was once committed to TCU. Last month, though, he tweeted out a video that announced his intention to attend Texas.

When Harrison signed on the dotted line, he did so with a little bit of uncertainty in his future. Texas does not currently have an offensive coordinator. Earlier this month, both of UT’s receivers coaches were either fired or reassigned.

Texas did lose a committed receiver this week when Temple’s Quentin Johnston flipped to TCU. The instability on the offensive staff was not enough to sway Harrison or Fort Bend Austin’s Troy Omeire away, though. Herman envisioned that the Longhorns will likely add another receiver on national signing day in February.

Harrison said he did have a relationship with ousted assistants Drew Mehringer and Corby Meekins. It was Texas director of recruiting Bryan Carrington that played the biggest role in his recruitment, however.

“I feel like coach Herman is going to hire whoever’s best at that position,” Harrison said. “He did it for a reason and I am just going to (trust) him.”

Incoming running back Bijan Robinson has five-star expectations for Texas, too