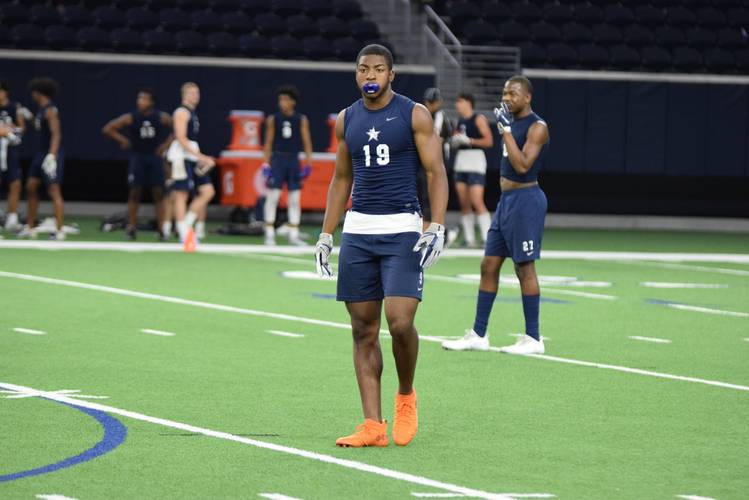 Recruiting rarely sleeps. Texas swept up Wednesday when each of the 16 pledges signed national letters of intent, including five-star running back Bijan Robinson. The 2020 class ended the day ranked 11th in the nation and second in the Big 12. The three-day early signing period lasts until Friday and Texas proved it wasn’t done on the recruiting trail Thursday morning when it flipped Frisco Lone Star outside linebacker Jaylan Ford from his Utah pledge.

Welcome to the family, Jaylan Ford.

Utah flipped running back Ty Jordan from Texas earlier in the month. The two teams square off Dec. 29 in San Antonio for the Alamo Bowl. Ford is a 6-2.5, 205-pound outside linebacker who can run like a safety. He held 11 offers, including Utah, Minnesota and Kansas. Ford is the model of production. He was the District 13-5A Defensive Newcomer of the Year as a sophomore and the District 5-5A Division I MVP as a junior.

Skill set: Ford is a traditional linebacker with sideline-to-sideline speed and the ability to work through blocks at the point of attack. He’s more of a traditional linebacker than the Longhorns clamored for under former defensive coordinator Todd Orlando. Ford is a tackling machine who recorded over 100 tackles as a junior. He’ll likely end his career as a three-time all-district selection in one of the best Class 5A districts in the state.

The hiring of Chris Ash at defensive coordinator changes the recruiting strategy on defense. Ash hopes to add a handful of defensive prospects that suit his schemes better than the prospects already signed or on campus. Ford ran a 4.47 shuttle at The Opening Regional in March.

Immediate impact: Texas needs linebackers and that gives Ford a chance to crack the two-deep as the 2020 season progresses. His instincts can’t be taught and he moves laterally better than current linebackers like Ayodele Adeoye. The loss of 2019 linebacker signee De’Gabriel Floyd to injury also increased the need for bodies at linebacker. Texas expects a move towards the 4-2-5 formation under Ash and that requires real linebackers capable of playing in the muck.

Fitting into the program: Ford became the sixth DFW area prospect to sign with Texas in the 2020 class. He’ll join Ja’Quinden Jackson, Jake Majors, Prince Dorbah, Andrej Karic and Jaden Hullaby. Ford will arrive in the summer and immediately add some toughness and athleticism to the linebacker room. Frisco Lone Star is another strong program in DFW that Texas would benefit from recruiting on a regular basis.

Recruiting at the position: Ford is the second linebacker to sign with Texas in the 2020 class, joining four-star Prince Dorbah of Highland Park. Dorbah spent most of his high school career at defensive end, so Ford could be the only true linebacker pledged to the Longhorns. Texas’ remaining targets on defense include defensive linemen Princely Umanmielen and Alfred Collins, as well as five-star cornerback Kelee Ringo.