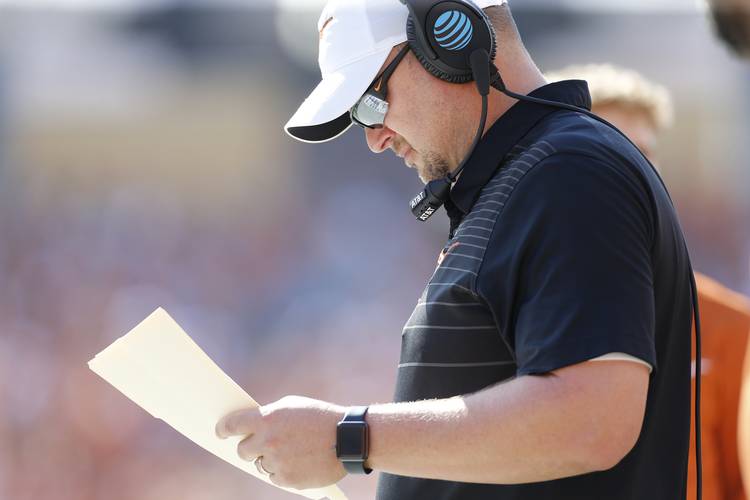 Texas coach Tom Herman signed No. 3-ranked classes in 2018 and 2019; his 2020 class, which will have fewer players, is ranked 11th a little more than a month away from national signing day. (Stephen Spillman/For Statesman)

Texas inked 16 future Longhorns on Wednesday. The 2020 recruiting class signed national letters of intent throughout the country on the first day of the early period. Texas’ group currently ranks 11th in the nation and second in the Big 12. It’s headlined by five-star running back Bijan Robinson and four-star quarterbacks Hudson Card and Ja’Quinden Jackson.

The cycle didn’t end for Texas, however. The Longhorns need more than 16 players in the 2020 class and will get an opportunity in January to recruit a handful of remaining prospects to add on national signing day on the first Wednesday in February.

So, what should fans expect before the book is closed on the 2020 class? Let’s take a look.

There are four clear targets remaining for Texas. The top priority is four-star defensive tackle Alfred Collins. The Bastrop Cedar Creek standout is expected to announce his college destination at the All-American Bowl in San Antonio on Jan. 4. He has maintained throughout the cycle that he’ll wait until after December to pick a school. Baylor, Oklahoma, Texas A&M and Alabama are also in the mix.

Texas signed only two defensive linemen on Wednesday. The Longhorns hope to add Collins, but that’s not the only local defensive lineman on the radar. Manor’s Princely Umanmielen is still in play despite his decommitment from Texas in October. Umanmielen was never a fan of the odd-man front deployed by former defensive coordinator Todd Orlando. The hiring of Chris Ash, a coordinator known for a 4-2-5 defense, might get Umanmielen back on campus before signing day.

The third defensive target on the board is five-star cornerback Kelee Ringo. The Arizona product has been a long-time target for the Longhorns and he hosted an in-home visit with UT coaches last week. Georgia was considered the favorite throughout this season, but Texas continues to gain momentum. Ringo won’t sign until February, which is good news for a Texas program hoping to get him back on campus one more time.

The one obvious offensive target remaining is three-star slot receiver Kelvontay Dixon. The Carthage product is the younger brother of UT running back Keaontay Ingram. He chose to wait until February because his Carthage team is playing for a state championship on Friday morning. He was a one-time pledge to Arkansas.

Expect new names to emerge with offers as the new coordinators begin to identify a handful of targets. The obvious areas of concern are on defense and at wide receiver. Texas signed excellent classes at quarterback and offensive line, and Robinson gives Texas a true star at running back. The defensive numbers aren’t as impressive; only six defenders signed on Wednesday.

The two defensive line targets are Collins and Umanmielen. Ringo is the second cornerback of the class in an ideal world. It’s hard to identify the other targets until new offers pour out in January and the dust settles after the early period, which ends Friday. Texas must comb through the unsigned prospects to find bodies at linebacker and in the secondary if Ringo ends up at Georgia.

Linebacker is the most glaring area of weakness in the class. That’s on top of the news that 2019 linebacker signee De’Gabriel Floyd has been forced to give up football due to stenosis. Linebacker is a weak spot for the Longhorns and the group needs an influx of talent and speed. Texas offered 16 different linebackers before December. The Longhorns landed one in Highland Park outside linebacker Prince Dorbah. The other 15 are committed to other programs.

Texas signed another quality class under Herman no matter what happens before the next signing period. Adding Collins and Dixon, and the possibility of Umanmielen and Ringo, should give fans plenty to care about in the final month of the cycle. That wasn’t true in the past two years when Herman wrapped up No. 3-ranked classes by the early period.

The 2020 class won’t have the sheer volume of players as those previous two classes, but it’s an excellent haul considering the Longhorns went 7-5 and are undergoing coaching changes on both sides of the ball. Tom Herman and his staff held on to most of its recruits despite those struggles, and that’s not easy with high-level talent.

The average ranking of the players in Texas’ class is actually better than it was in 2019. That only increases if we remove transfer Bru McCoy from that group. It wasn’t a year that the Longhorns contended for a recruiting title or signed two dozen prospects, but this class is full of players who can help in the immediate future. Eight of the 16 signees plan to enroll early.

Texas tunes up for No. 1 Stanford with sloppy 73-60 win over Ohio