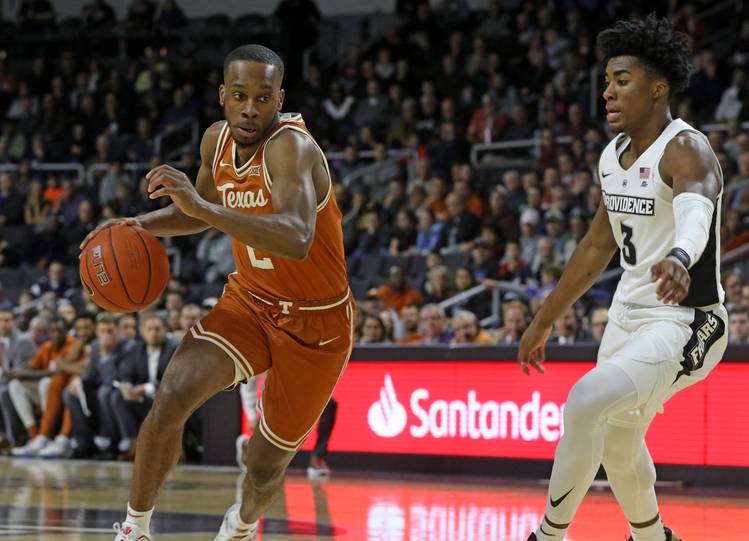 Texas' Matt Coleman looks to get past Providence's David Duke in the first half of the Friars' win on Saturday. (Sandor Bodo/Providence Journal)

PROVIDENCE, R.I. — The fine citizens of Friartown sure were anxious to see Will Baker miss two free throws on Saturday.

Whenever an opponent misses two consecutive free throws in the second half, Providence fans win a free chicken sandwich. And since Texas was in such a giving mood, why not?

The freshman missed two free throws with 1:17 remaining, and the 9,876 fans inside the Dunkin’ Donuts Center exploded with joy. Happy holidays, one and all.

There hasn’t been much to celebrate around these parts lately, what with the Friars sporting a .500 record. The Longhorns came in with a shiny 9-1 mark. But only one team left in a festive mood after Providence ran away with a 70-48 blowout win.

“I feel like at times we fought, then at times we just wilted and gave in,” UT guard Courtney Ramey said. Only he and fellow guard Matt Coleman III did much offensively, as they combined for 23 points. No other Longhorn had more than seven.

“Just from the jump, we got out-competed, out-toughed,” Coleman said.

The Longhorns (9-2) shot a season-low 31.7%. It was the sixth-lowest total in coach Shaka Smart’s five seasons. They made only three of 21 shots from 3-point range. The 14.3% finish was tied for the seventh-lowest total on Smart’s watch.

They got blasted on the boards 55-39, although UT’s Jericho Sims did have a season-high 13. The Horns had five blocks, but that was offset by 13 turnovers.

Losses like this won’t help the perception that Texas’ impressive non-conference record was built on weak competition. Forget the statistics, though. Overall, this boiled down to sheer toughness. The Friars won in Austin last season by going straight for the burnt-orange jugular. That same mentality won out again.

Maybe it’s a Big East thing. Remember how Xavier strolled into the Erwin Center last season in the NIT and tried to punk Texas? The Horns stood tall then and won in overtime. Not this time in the so-called Big East/Big 12 Battle, part of a new inter-league marketing promotion.

Rest assured that Big 12 foes will notice on film how those who impose their will on Texas will likely have the upper hand.

“I didn’t like our defensive fight,” Smart said. “I think the biggest lesson out of a game like today is there’s only way to go win. We didn’t honor that. We didn’t have enough urgency for doing that. That’s why we didn’t win.”

Smart seemed almost accepting of the poor shooting, mostly because of his belief that this group has better shooters than what they showed Saturday. Texas came into Rhode Island shooting 44.8% overall and 34.1% from beyond the arc in 10 previous games.

He kept circling back to the poor defensive effort. The plan was for the 6-foot-8 Gerald Liddell to guard Providence’s talented Alpha Diallo. But Liddell picked up two fouls in the first three minutes, went to the bench and the 6-foot-7 senior was free.

Diallo finished with 14 points, 12 rebounds and five assists in 34 minutes. Luwane Pipkins had 13 points, Nate Watson scored 10 more and Kalif Young grabbed 10 rebounds. It was a well-rounded effort for the Friars (7-6).

And remember, this wasn’t some bunch of over-achievers. Providence lost to Florida last week by 32 points. The Friars shot 25.9% in that debacle, their lowest total in nine years.

“So that’s a lesson for our guys,” Smart said. “Sometimes, it does take a loss to create that. It sucks that’s the case, but that’s where we are. When our guys get back, I told them in the locker room afterward, they better have learned from this reality check.”

Texas fell behind 15-7 and it was an uphill battle the rest of the day. Ramey scored on a nice layup and then had a nifty give-and-go from Baker. Coleman scored on a rainbow floater, and Baker found Andrew Jones open for UT’s only 3-pointer in the first half.

But Texas was still trailing by five at that point. Pipkins hit a 3-pointer and Watson had a put-back dunk when he caught the ball on the opposite side of the bucket.

Providence had a 43-28 lead at halftime and a 19-point lead with about 10 minutes left. All they had to do was cruise to the final horn.

Texas coaches and players took a team charter flight home and will be off until Dec. 26. They all have plenty to think about before a non-conference game against High Point on Dec. 30. The Big 12 opener is Jan. 4 at Baylor.

Smart called this a “reality check.” How would Ramey describe this team’s effort?

“As a group, I give us a C,” Ramey said. “Some individuals are better than others, and that’s not going to win at a high level for us. The thing is just trying to find five players that are going to give it their all and just come and attack.”

Asked if he was bothered by Saturday’s outcome, Ramey said no.

“Mistakes are going to happen,” he said, “but you’ve got to battle back from them and be the player they can be.”

Amid holiday season, Texas unwraps 69-64 win over No. 1 Stanford