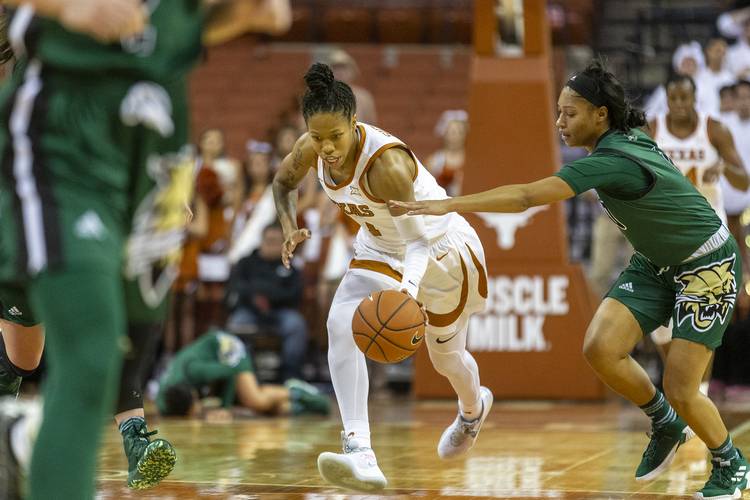 Sug Sutton has played a lot of basketball in her day.

The Texas senior has already clocked 2,561 minutes during her years as a Longhorn. The all-conference guard has started 44 times. When Texas hosts Stanford on Sunday, she’ll be playing in the 111th game of her college career.

Stanford (10-0) is the top-ranked team in the country. On Friday, Sutton was asked if she still gets up for these kind of matchups. Have these non-conference clashes become monotonous? Or does seeing that “No. 1” attached to Stanford still elicit excitement?

“It means a lot to have the opportunity to play the No. 1 team in the country right now, and for them to come to our home court,” Sutton said. “This game means a lot. They’re a really good team, so I’m just ready to see where our team is at.”

Texas (6-4) has a chance to make a national statement before the holiday break and the start of the Big 12 schedule. Texas is 5-26 all-time against No. 1-ranked teams on the Associated Press poll. The last time the Longhorns have toppled a No. 1 was a 74-59 win over Tennessee at the Erwin Center on Nov. 25, 2004.

Since that win over the Lady Vols, Texas teams have gone 0-13 against the best of the best. The average margin of defeat in those 13 combined losses against Tennessee, Baylor and UConn has been 22.3 points. Last season, the Longhorns dropped 74-68 and 64-35 decisions to top-ranked Baylor.

Additionally, Texas is only 8-13 against ranked teams since the start of the 2017-18 season. The Longhorns, though, were victorious in their last meeting with a top 25 foe. On Dec. 8, Texas traveled to No. 17 Tennessee and earned a 66-60 win.

“We were really connected. When we’re connected, we’re a really good basketball team,” Sutton said. “I feel like if we just stick to our game plan and stick to what we prepare for in practices and stuff, I think that we’ll be fine and we’ll be able to compete with anybody that we step on the floor with.”

Texas coach Karen Aston has said that week will be a good setup for a conference grind that begins on Jan. 3. On Wednesday, Texas bested an Ohio team that’s been picked to win the Mid-American Conference. Stanford is among the heavy hitters in a Pac-12 that also features No. 3 Oregon, No. 4 Oregon State and No. 10 UCLA.

Aston said “it’s hard not to find a lot to like” about Stanford, which is coming off a 78-51 win over Tennessee. Only 11 teams are scoring more than Stanford’s 81.9 points per game, and Cardinal players are averaging between 7.2 and 14.2 points. Aston praised the development of Stanford guard Kiana Williams, a junior who is contributing 12.4 points and 4.1 assists per game.

“As we all know in team sports, the quarterback and the point guard of the teams is really valuable,” Aston said. “They go, kind of, as she goes.”

Sunday’s game will be four days removed from Texas’ 73-60 takedown of Ohio. The gap between UT’s games against Tennessee and Ohio spanned 10 days. Rust could have played a part in the season-high 24 turnovers Texas had against the Bobcats.

Joyner Holmes (16 points, 12 rebounds), who had been slowed by an ankle injury, and Charli Collier (10 points, 16 rebounds) did record their eighth and seventh double-double performances of the season on Wednesday. Celeste Taylor, a freshman, scored a career-high 17 points. UT’s 24 offensive rebounds also tied for the program’s third-best total since the start of the 2015-16 season.

“I think we played pretty well overall. I think we had some lapses but I can’t blame anything,” Holmes said in the post-game press conference. “Overall, I think we showed spurts of the team that we can be.”