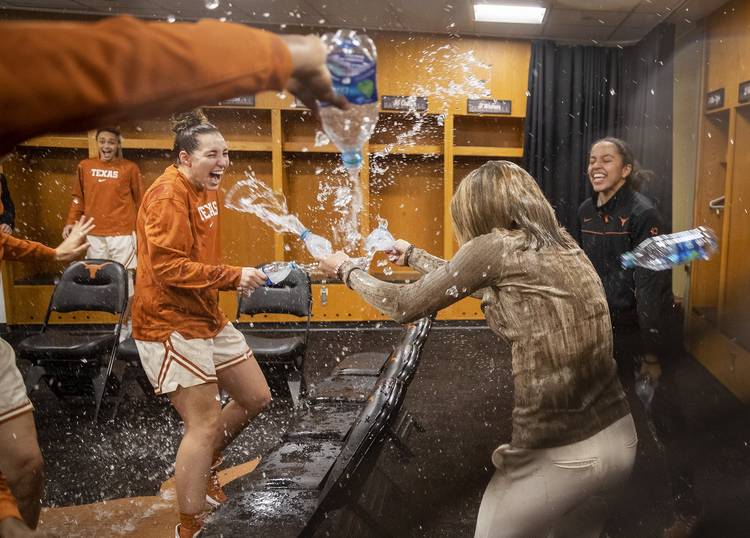 Texas Longhorns guard Sophie Taylor (5) joins her teammates as they throw water on Texas Longhorns head coach Karen Aston while they celebrate in the locker room after beating Stanford Cardinal 69-64 during an NCAA women's basketball game at the Frank Erwin Center in Austin, Texas [RICARDO B. BRAZZIELL/AMERICAN-STATESMAN]

During a break in the action at the Erwin Center on Sunday, a video showed members of Texas’ women’s basketball team revealing the best gifts they had ever received during the holidays.

Bikes, phones and puzzles are nice, but how about a monumental victory on the basketball court? On Sunday, the Longhorns gifted that to themselves. With No. 1 Stanford in town, four UT players scored at least 10 points in a 69-64 win.

Stanford has topped The Associated Press poll for the past three weeks. Sunday’s victory was UT’s first over the AP’s top-ranked team since a 74-59 upending of Tennessee in 2004. The Longhorns had dropped their previous 13 matchups against No. 1 teams.

“That win really just solidified, like, we can do it,” sophomore center Charli Collier said in the postgame press conference. “If we continue to practice how we play, then we can get things done for sure.”

The advantage on the scoreboard tilted toward Texas for most of the first three quarters Sunday. The final basket of the third period, however, gave Stanford a 47-46 edge. The two teams then exchanged blows during a frantic fourth quarter that featured five ties and seven lead changes.

Texas didn’t trail again after Collier’s 3-point play off a teammate’s miss gave the Longhorns a 61-60 lead. Texas got 11 points from Collier, Holmes and Sutton down the stretch and was able to hold off a few of Stanford’s counterattacks. On the game’s final play, Holmes stole an inbound pass and streaked down the court for a clinching layup with less than a second remaining.

“I think that’s where we’ve grown so much is not getting too down on ourselves when teams make runs,” Texas coach Karen Aston said. “That’s just a maturity thing and a confidence thing for them.”

Collier led the Longhorns with 20 points and 19 rebounds. Holmes (13), Sutton (12) and freshman Celeste Taylor (10) each contributed a double-digit point total.

After the win, Aston said the Longhorns had displayed a “complete team effort.” That analysis might have been the most evident in Underwood’s statistical line.

The 6-foot guard did not score, missing five shots and four free throws. But she distributed two assists and recorded four steals and 10 rebounds.

“Everybody can contribute, whether you score or whether its rebounding,” Holmes said. “It’s anybody’s day on this team, in my opinion.”

Seven of Underwood’s rebounds were offensive, and Collier also rebounded six of UT’s misses. As a team, the Longhorns collected 19 offensive rebounds. Two of those led to five points in the fourth quarter for Collier and Holmes.

“They got 19 O-boards, and I think that’s a real problem,” Stanford coach Tara VanDerveer said. “Their O-boards were a big thing. I think their aggressiveness” also was a factor.

Paced by Taylor’s eight first-quarter points and the seven points that Holmes scored in the second period, Texas built a 35-26 lead by halftime. UT led by as many as 11 points over the first 20 minutes, but Collier’s layup with 4:21 left in the second quarter gave the Longhorns a notable 30-21 advantage.

That nine-point deficit was the largest faced by Stanford this season. The Cardinal had not trailed in two of their first 10 games. Only Cal Baptist had held a lead of more than five points against a team that boasted an average margin of victory of 24.4 points.

Notes: The 19 rebounds grabbed by Collier were the eighth-most in school history. … Holmes was helped off the court in the fourth quarter after she injured her left foot. She returned for the final 5:32 of the game. … Stanford shot a season-low 31.7% from the field and was led by Lexie Hull’s 17 points. … Texas is off until a home game against Northwestern State next Sunday.