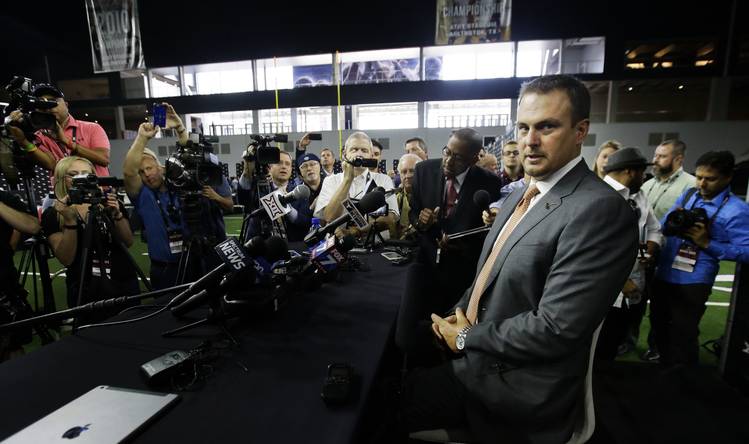 They said it — and sometimes swung fan perceptions and landed in hot water because of it.

Here’s a look at some of the best quotes from the last decade involving Texas football:

“Can you imagine being put out there against a great defense like that, in a setting like this? At one point, I thought he was going to come back and win this.”

“I really didn’t try to hit him that hard. I wasn’t trying to hurt him. It was just part of the game.”

“ESPN is the global sports leader, and having this relationship on our campus will be special for all associated with the university.”

— Texas athletic director DeLoss Dodds on Jan. 19, 2011, on the announcement of a TV partnership that would later be called Longhorn Network.

“As a lifetime Texas football fan, I am sad to see this rivalry come to an end.”

“This is a 100-year decision that we have addressed carefully and methodically, and I believe the Southeastern Conference gives the Aggies the best situation of any conference in the country.”

“The final play of the rivalry … Good snap and hold. Tucker’s kick is up … Justin’s kick is … GOOD! IT’S GOOD!”

“They have a sliver down the east side” of the state.

— Dodds on the geographic footprint the SEC added to the state of Texas by adding A&M in May 2012.

“Hell, all the money that’s not in the Vatican is up at UT.”

“We’d rather gone out with a win for sure. But we love the man, and the man loves us. Inside that locker room, we know we fought for him. That’s all that matters.”

— Texas quarterback Case McCoy after the 2013 Alamo Bowl that was Brown’s final game at UT.

“Change is never easy, but I have every confidence that UT athletics will continue to thrive as it embraces the future.”

— Steve Patterson after being fired as the Texas athletic director on Sept. 15, 2015.

“I was at home about to fire up the grill, and my phone rang.”

— Mike Perrin after being named the interim Texas athletic director on Sept. 16, 2015.

“When you had the blown opportunities we had, it’s hard to win a football game.”

— Strong during a four-minute press conference after Texas lost a Kansas 24-21 in overtime in 2016.

“He needed to work on his staff. He knew that; Mike knew that; I knew that. I offered to help in a key recruitment.”

“I did everything I could to help our team win.”

— Texas running back D’Onta Foreman in Atlanta after winning the Doak Walker Award as the nation’s best running back on Dec. 8, 2016.

— Herman after losing to Maryland in the 2017 season opener.

“Greater days are ahead, they just are. I believe in these guys, I believe in our coaching staff and most of all, I guess I believe in the enduring quality of the University of Texas’ fan base and pursuit of excellence.”

“A lot of people are gonna want to say this feels a lot like last year. It doesn’t to me.”

— Herman after a second loss to Maryland in the 2018 season opener.

— Texas quarterback Sam Ehlinger after defeating Georgia in the Sugar Bowl on Jan. 1, 2019.

“I wouldn’t trade this team for the world, man. I’ll keep going to war with these guys every day if I have to. And I want to.”

— Ehlinger after a win over Texas Tech to end the 2019 season.

“We’re going to be OK. Things are still headed in the right direction.”

— Herman after the Tech win ending his third season with the Longhorns.