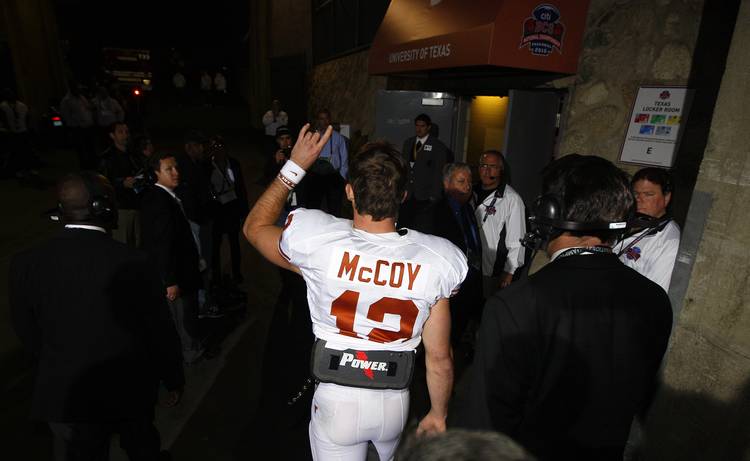 University of Texas QB Colt McCoy waves the Hook 'em sign as he leaves the field after the Horns lost the Citi BCS National Championship game to Alabama on Thursday in Pasadena, Calif., at the Rose Bowl Stadium January 7, 2010. Ricardo B. Brazziell/AMERICAN-STATESMAN

The 2010s weren’t exactly memorable for Texas football fans. The Longhorns won only 70 games, the lowest total since the 64 wins during the 1950s.

Still, there were some memorable moments this decade, which comes to an end on New Year’s Eve against Utah in the Alamo Bowl.

Trying to pick out the best and worst plays from each season is always a difficult task. What about the most impactful plays from an entire decade?

Here’s a look at our 10 most impactful plays from the 2010s — singular moments that have been earmarked in our minds for decades to come:

Alabama backup defensive end Marcell Dareus had no idea he was setting Texas on a long 10-year journey when he stuffed McCoy on the fifth play of the BCS national championship game. Former UT coach Mack Brown will forever believe the Horns would’ve won had McCoy not suffered that stinger and spent the rest of the night on the sideline. Instead, Alabama held tight against freshman backup Garrett Gilbert and won 37-21. “We deserved it,” Heisman Trophy winner Mark Ingram said.

Of course, fans remember the finish. Justin Tucker’s 40-yard field goal as time expired was the final nail in the Texas-Texas A&M rivalry series and secured UT’s 27-25 victory at Kyle Field. But that kick doesn’t happen without McCoy’s incredible 25-yard scramble from the A&M 48. McCoy couldn’t find any open receivers, dodged two tacklers and raced to the 23-yard line. “There are just times when a quarterback has to be a playmaker, and that includes making plays with his feet,” McCoy said.

Texas fans probably don’t remember Matthew Wyman’s name, only that he kicked for Kansas on that fateful, frigid night in Lawrence. Wyman’s 36-yarder at the end of regulation had forced overtime. Texas quarterback Shane Buechele’s pass was intercepted in the extra period, then Wyman drilled a game-winner for the Jayhawks. It was a total program gut-punch and the 24-21 loss cost UT coach Charlie Strong his job. Afterward, during a four-minute press conference, practically everyone jammed into that equipment room in Lawrence knew it was over.

The entire 2018 season was about building toward the future. An over-achieving group steadied the ship after two midseason losses and reached the Big 12 title game. Then came a shot against a true SEC blue-blood in the biggest bowl game in years. Ehlinger ran the ball on six consecutive plays from the Georgia 16 and finally punched it in on fourth-and-goal, cementing a 28-21 victory. “Winning this game, that makes you immortal,” senior corner Kris Boyd said. “They can’t take it away from you.”

Strong’s three-year tenure suffered a massive setback in his first game at Texas. Ash, who had a history of concussions, took another blow on the first play of UT’s second drive of the game. On another play, he got clobbered and his head bounced off the turf. Two days later, Strong announced that Ash had suffered a concussion and that the quarterback’s football career was essentially over, forcing Tyrone Swoopes to take over. It didn’t help that senior center Dominic Espinosa was lost for the season that night, too. The Horns went 6-7 in 2014.

Swoopes gave way to Shane Buechele as the starter that season but found new life in the “18-wheeler,” a running package tailor-made for the 6-4 senior quarterback. On second-and-goal from the 6-yard line in overtime, Swoopes got through traffic and dove for the end zone — and straight into a storybook finish. “I’m so happy for our fans, because they needed it,” Strong said. Players carried the coach around on the field afterward while ESPN’s Joe Tessitore told a national audience, “Texas is back, folks!”

TV cameras caught Dicker, a freshman, winking at linebacker Joseph Ossai in the midst of a nail-biting finish against the rival Sooners. Devin Duvernay’s 18-yard catch and another seven-yard grab by Andrew Beck set up the classic finish over future Heisman winner Kyler Murray. “Looking up after I kicked it,” Dicker said, “I saw the ball on the path there, and I was just like ‘OK, cool. It’s in.’”

All Iowa State fans will ever believe is they were jobbed out of a crucial Big 12 win. Texas trailed by six with 1:15 remaining when Gray was stopped short of the goal line and lost the ball. Jeremiah George returned the fumble the other way for an apparent game-clinching touchdown, but replays showed Gray’s knee was down. Case McCoy’s 1-yard sneak with 51 seconds left put Texas ahead, and Jackson Jeffcoat and Cedric Reed’s defensive stops sealed a 31-30 win.

This game might’ve been remembered for Tank Jackson’s nerves getting the better of him during a botched coin flip. Or, it could’ve been remembered for Swoopes’ solid performance. Instead, it’s remembered for Ishmael Adams’ 45-yard punt return for UCLA. Then on the next play, Jordan Payton got UT’s Duke Thomas to bite on a fake, and Jerry Neuheisel completed a 33-yard touchdown pass in the Bruins’ 20-17 win.

Texas Tech came storming back in Lubbock with 24 points in the fourth quarter to tie things up 34-34. Texas called timeout with 28 seconds left, facing first-and-10 from the Tech 24. Ten years prior, Michael Crabtree ruined UT’s national title hopes with a miraculous catch in the northeast corner of Jones AT&T Stadium. On this night, the 6-4 Humphrey went up against a 6-foot corner and hauled in an incredible 29-yard game-winner in the same corner.