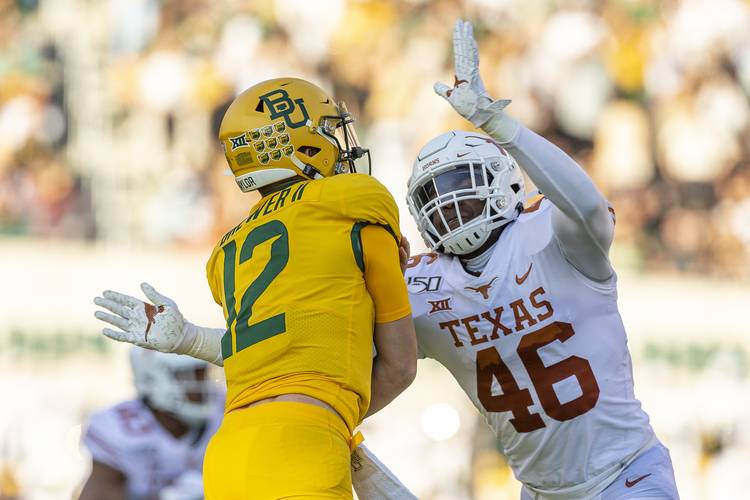 SAN ANTONIO — Strip away the pageantry of game day and you are reminded that college football is, and forever will be, a business.

Joseph Ossai was reminded of that when Texas coach Tom Herman fired defensive coordinator Todd Orlando, his position coach, on Dec. 1. The UT sophomore said he and several other linebackers went over to Orlando’s house the next night and watched Monday Night Football together.

“You could tell he missed us,” Ossai said. “He understands this business, so he was calm. He was happy to see us, and we just tried not to make it awkward. We just talked, laughed and watched the game.”

Ossai was one of Orlando’s most vocal supporters the last two seasons, and the coach consistently put the linebacker in advantageous positions on the field.

But the defense now heads into Tuesday’s game against No. 11 Utah with interim defensive coordinator Craig Naivar at the controls. Orlando had one year left on a guaranteed contract worth $1.7 million.

“The linebackers are hurting the most, because that’s their coach,” defensive tackle Keondre Coburn said. The redshirt freshman said he was driving back to campus and his phone lit up with the news of the coaching staff shake-up.

Ossai said he’s already had a brief conversation with new defensive coordinator Chris Ash, who was hired on Dec. 17. Ash will not coach in the Alamo Bowl; he will begin those duties once the offseason begins.

“There hasn’t been really signs of people wanting to (transfer) portal outta here,” Ossai said. “We’ll just have to give him a chance. You can’t really say you want to leave when you don’t know the guy and know what he does.”

‘Life lessons’ for Horns: The Dr Pepper-gulping Naivar said he has no inclination if Herman will retain him for 2020. Naivar said the coaches and players have to “take ownership” in why defensive coaches were fired and move on.

Naivar, who called Orlando a “damn good ball coach,” said he will mostly stick to Orlando’s defensive scheme and strategy against the Utes. “We would be foolish as ever to try and reinvent the wheel and do something different,” he said.

Naivar repeated called Utah a “damn good team.” He last called plays as a defensive coordinator at Texas State from 2011-13.

“There are very high standards in what we do, and its life lessons when you don’t meet certain standards,” Naivar said. “You’ve got to learn how to respond, and how you respond is a thousand times more important than actual what happened to you.”

Scalley on Texas job: Utah defensive coordinator Morgan Scalley’s name was mentioned as a possible candidate for the same post at Texas. During the Utes’ interview session Saturday, Scalley somewhat confirmed that Herman at least gauged his interest.

“I’m not going to talk about that,” Scalley said. “But what I will say is nothing ever got serious, so it’s not worth talking about.”

Scalley just finished the first year of a two-year contract worth $820,000 annually. His name was linked to the UNLV head coaching job, among others. Utah quickly announced a “contract amendment” on Dec. 9 in what was considered an unprecedented move for an assistant coach. Terms were not disclosed.

“Are you the leading sack — ” Scalley asked Anae.

“I need one more,” the senior said.

Asked if he’s been studying Texas left tackle Sam Cosmi’s game tape, Anae said, “52? Just overall, good scheme. I look at his set, look at where their hands go and stuff like that.”

Briefly: Both Texas and Utah were scheduled to visit SeaWorld and attend the Spurs game Saturday as part of the Alamo Bowl activities. Offensive players for both teams are scheduled to meet reporters on Sunday. A pep rally at Arneson River Theatre on the River Walk is scheduled to begin at 4 p.m. Sunday.