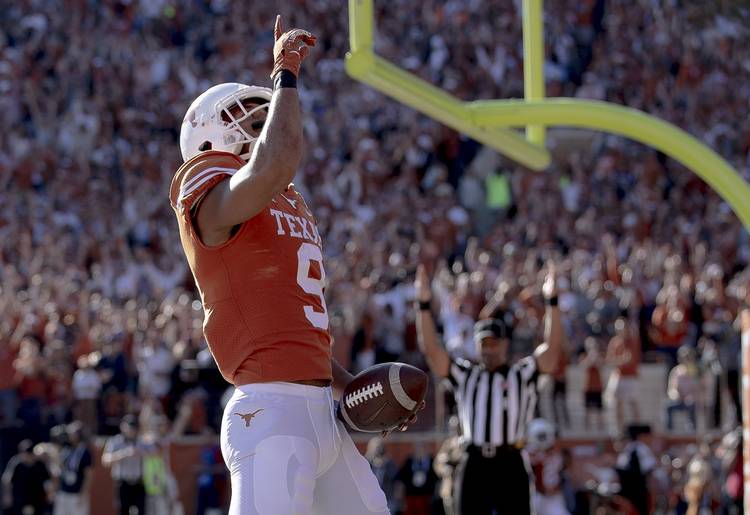 SAN ANTONIO — Collin Johnson admits his senior season has been “a little frustrating.” But the Texas receiver wasn’t going to miss his final game in burnt orange, whether his nagging hamstring injury cooperates or not.

Johnson spoke at length Sunday about his decision to return to UT in 2019 after thinking hard about the NFL Draft last season. He played in two games, missed he next three with the injury, played in four more and missed the final three.

Johnson finished the regular season with 35 catches for 497 yards and two touchdowns. Still, Johnson said, “I wouldn’t change a thing.”

“I know things didn’t go anywhere near where I wanted to on a personal level, and even as a team this year, it’s been a little frustrating,” Johnson said. “You’ve got to make a decision in life and roll with it. And I learned a lot from it.

“At the end of the day, I can tell myself I did everything in my power and gave it to the University of Texas,” he added. “I can put my head on the pillow at night that I exhausted my eligibility, I was a team captain, I led my team to the best of my ability and every time I was on the field, I gave everything I had. That’s just something that’s huge for me as a person.”

Johnson had nowhere near the injury problems his brother, Kirk, did. Kirk Johnson’s career at Texas never really got started due to multiple injuries and surgeries. But Kirk never threw in the towel and appeared in five games this season.

If Kirk didn’t quit, Collin sure couldn’t, either.

“But at the end of the day as a man, what makes you you?,” he said. “I feel like what makes me me is being the best I can be in everything, be the best teammate, a player. On and off the field, I’m going to be the best Collin Johnson I can be, be the best version of myself.”

Ehlinger to seek info: It raised eyebrows Sunday when junior quarterback Sam Ehlinger said he would seek information from the NFL draft advisory committee about his potential draft status for 2020.

“It’s just let’s see what they say,” Ehlinger said at an Alamo Bowl press conference. “I really haven’t thought about it. I want to win a bowl game.”

The stated purpose for the so-called College Advisory Committee is to give feedback to college players so that “players have all the facts.” The committee labels each underclassman as a potential first-rounder, second-rounder or nothing, which means stay in school.

“I haven’t really sat down and talked to a whole lot of people about it just because I’m focused on leading these guys and being he best I can be for them,” Ehlinger said. “Honestly, going into this year, I didn’t really even think about it. I wasn’t considering that at all. So I just feel extremely blessed that’s even a question that’s being talked about.”

Ehlinger has thrown for 3,462 yards and 29 touchdowns this season, putting him just behind Colt McCoy in UT’s record book. The Westlake product has the chance to challenge McCoy for almost every passing record should he stay all four years.

Ehlinger said he has not been told much about UT’s offensive philosophy in 2020. The school is expected to announced Ohio State assistant Mike Yurcich as the new offensive coordinator soon.

Love for Duvernay: Offensive line coach Herb Hand injected himself into a reporter’s Q&A with receiver Devin Duvernay with his thoughts on the nation’s No. 2 pass catcher.

“It’s a shame that Devin Duvernay was not up for any type of postseason award,” Hand said. “It’s a joke to be honest with you. The guy led the country in receiving. I wouldn’t trade him for anybody.”

Duvernay switched positions this season, moving from the outside receiver position to the slot. He’s enjoyed a career year. Duvernay said he “tried to get better every day, no matter what skill set I needed to get better at, so I could be better for my team, get on the field and just produce.”

“He has repped predominantly with the scout team through the majority of the year,” Ludwig said. “He has not had great exposure to the Utes’ offensive system in terms of taking actual reps, so he will be the third quarterback in this football game.”