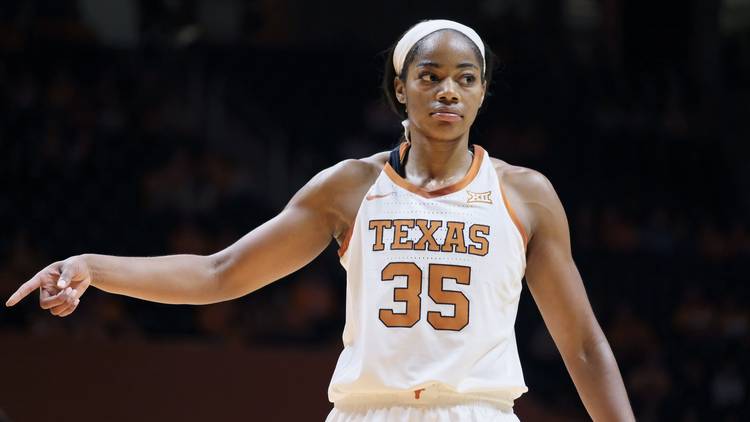 With every game, and each foray into tough crowds around the basket, Charli Collier displays why she arrived at Texas last season touted as one of the top recruits in the country.

Collier, a 6-foot-5 post player from Barbers Hill High in Mont Belvieu, was ranked as the No. 2 freshman by ESPN, and big things were expected. She struggled, though, —averaging a modest 5.9 points and 4.3 rebounds in fewer than 15 minutes a game.

Now she’s becoming a star, one who produced her ninth double-double of the season — 16 points and 12 rebounds — along with two blocks as the No. 25 ranked Longhorns defeated Northwestern State 91-49 Sunday at the Erwin Center.

“Maturity is a big thing for players between their freshman and sophomore years,” coach Karen Aston said. “The physicality and speed of the game really catches them off guard.”

Collier averages 15 points and 11.4 rebounds in 31.4 minutes a game. She had 20 points and a career-best 19 rebounds when the Longhorns (8-4) beat then-No. 1 Stanford last week. She received recognition as consensus national player of the week.

“I know now that I have to step up because my team needs me around the paint,” Collier said.

The Longhorns need her more than they anticipated before the season. When the 6-4 freshman Ashlee Hannan was removed from the roster during pre-season practice, Aston was left with only Collier and the 6-3 Joyner Holmes for the two post positions.

Smarter basketball in an effort to avoid foul trouble became paramount. Both Collier and Holmes have mostly complied, although Holmes picked up four fouls in 17 minutes against Northwestern State. The two have combined for 17 double-doubles.

Last season Collier averaged a foul every 6.9 minutes. This season she’s committed one every 13.4.

Staying on the court enables Collier to continue adapting to the physical nature of college basketball. Serious work in the Texas weight room helps as well.

“The maturity is not just from last year but from the start of this year,” Aston said. “When the season started it still kind of caught her off guard that the game is physical, and that would be people’s game plan against her. I think that she’s maturing and understanding that she has to take that sometimes and handle it, and if she handles it then a lot of times she’s gonna get to the free throw line.”

Collier converted all six of her free throws on Sunday, improving to 83 percent for the season.

The rest of the Longhorns were not so adept, hitting 19 of 36. Coming in, the team ranked second in the Big 12 with 73.6 percent accuracy.

Aston said a week off between games during the holidays, with just one day of practice, didn’t help.

“I’m a little bit disappointed, I guess, in our mental approach,” Aston said. “Missed free throws and some missed assignments on defense.”

Senior Kira Bonner matched her career best with 21 points for Northwestern State (3-8). She made four 3-point baskets – two more than the Longhorns hit in 13 tries.

But Northwestern, with no player taller than 6-1, could not compete inside. Texas outscored the Lady Demons 50-8 in the paint.

With Collier around, in tandem with Holmes, the Longhorns could that kind of edge the rest of the season.

NOTES: Longhorn reserve Audrey Warren made her debut for the season after missing the first 11 games while in concussion protocol. She had two points and three rebounds in 11 minutes. … Texas had a moment of silence for television sports reporter Carley McCord, a Northwestern State graduate who died in a plane crash Saturday on her way to Atlanta for the Peach Bowl. … Texas begins Big 12 competition against TCU Friday at the Erwin Center with a 6 p.m. tip.