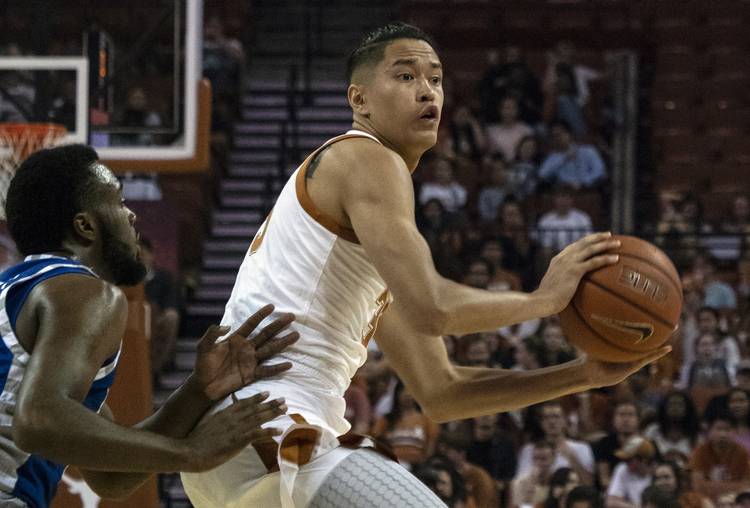 Shaka Smart had a lot of time for contemplation, nine days between games, after his Longhorns were pounded at Providence on Dec. 21.

One decision the Texas made after the 22-point defeat was to appoint two new starters. Into the lineup went Andrew Jones in place of Courtney Ramey. Out went Gerald Liddell, replaced by Kamaka Hepa.

Who knows if the changes really mattered, given that next up on the schedule after a low point was High Point? But the Longhorns played well enough to overwhelm High Point 89-58 Monday night at the Erwin Center.

Certainly, circumstances are different for Jones and Hepa.Jones, a redshirt sophomore, made his first start for Texas since Dec. 5, 2017 – before he was diagnosed with leukemia. Jones was absent for nearly two years while receiving treatment, rejoining the rotation this season as a reserve. He is the team’s second-leading scorer, and finished with 13 points and four assists on Monday.

“Andrew’s been really making progress in a lot of ways,” Smart said. “Remember, earlier in the fall he got off of his last treatment. He’s still kind of working his way back, and his confidence is growing.”

Hepa, a 6-9 sophomore, made the second start of his career, and his first of the season. He contributed seven points, five rebounds, three assists and three blocks in 24 minutes.

The rebounds and assists matched his career-best, and the blocks set a new one.

Before Monday, Hepa played a total of 20 minutes in eight games this season. Against High Point, he produced a couple of hustle plays that he turned into assists, one with an offensive rebound, the other by recovering a loose ball and passing while sitting on the court.

“When you come off a game like we did, and you have three or four days when you don’t get to practice, and you are sitting there thinking about it, you kind of come back to what you value most,” Smart said. “He’s committed to trying to help Texas win. He probably gives as much or more energy as anyone on our team.”

Hepa, who found out on Sunday that he would start, said he always prepares as if he might play.

“That’s been my mindset throughout this whole process, stay ready and be about the team,” Hepa said. “Whatever the team needs.”

Hepa, a big recruit for the Longhorns, needs to improve on defense to keep earning playing time.

“He’s better on the offensive end than the defensive end for sure,” Smart said. “I think he can be a good team defender for us by using his mind and his basketball IQ.”

Ramey, a sub for the first time this season, scored 13 and grabbed six rebounds. Jericho Sims had 12 points and 11 rebounds. Matt Coleman added 10 points and eight assists against just one turnover.

The Longhorns led by only 12 at halftime, but gained some impetus by finishing the period with an 8-0 push.

“The last few minutes of the first half set the tone for Texas,” High Point coach Tubby Smith said.

Texas began the second half with another 8-0 run. Febres hit consecutive 3-pointers as the midway point of the second half approached to give the Longhorns a 63-39 lead.

The Longhorns committed 24 fouls, 12 more than High Point. But Texas cut down on fouls as it created separation in the second half.

That helped the Longhorns to scored16 fast-break points in the second half.

“That speeded the game up,” Coleman said. “Fouling slowed the game down.”