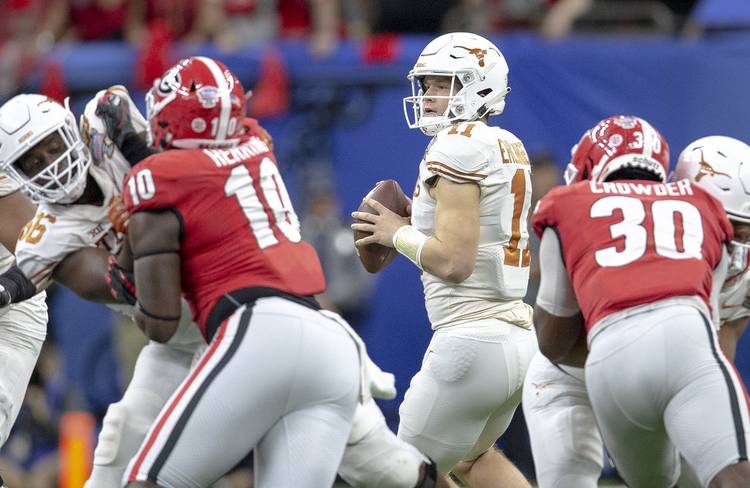 Texas quarterback Sam Ehlinger (11) looks for an open receiver against Georgia during the Sugar Bowl on Jan. 1, 2019 in New Orleans. [NICK WAGNER/AMERICAN-STATESMAN]

Five key matchups in the Alamo Bowl to keep your eye on Tuesday night:

This season, Ehlinger has compiled 4,052 yards of offense and 35 touchdowns while Huntley has been good for 3,223 yards and 23 touchdowns. How have they fared in bowl games? Ehlinger didn’t start in the 2017 Texas Bowl, but UT’s last two postseason victories should go on the junior’s résumé. In the 2017 Texas Bowl and the 2018 Sugar Bowl, Ehlinger totaled four touchdowns while completing 71.4% of his passes and committing no turnovers. Huntley was injured for Utah’s 2018 bowl game, but he rushed for three touchdowns in the 2017 Heart of Dallas Bowl and the 2016 Foster Farms Bowl.

Devin Duvernay and his 103 receptions could run down both a Texas record (Jordan Shipley’s 116 catches in a season) and this season’s national leader (SMU’s James Proche, who has 111). Duvernay has accounted for 35.2% of UT’s season receptions, but the Longhorns do have some depth. Senior Collin Johnson should be back in the starting line-up, and both Jake Smith and Brennan Eagles have caught six touchdown passes. Utah’s secondary will be missing All-Americans Julian Blackmon (injury) and Jaylon Johnson (NFL draft). Can the Utes hold a team without a touchdown pass for the seventh time this season?

The 6-7, 300-pound Cosmi will have his hands full with the 6-3, 265-pound Anae, whose 29.5 career sacks are tied for first place in Utah’s record books. Cosmi was an honorable mention for the Big 12’s offensive lineman of the year award this season. Texas, however, has given up at least five sacks in three games. With fellow All-American Leki Fotu playing alongside him, Anae has a sack in four of his last five games. “Obviously they present a challenge,” UT offensive line coach Herb Hand said of the Utes’ defensive line. “… They’re older guys that have been in the program for awhile. They play extremely hard.”

Utah will rely on a running game led by 1,350-yard rusher Zach Moss. Huntley, though, is an all-conference honoree, so what happens when the Utes decide to pass? Kuithe leads Utah in receptions (31), receiving yards (572) and touchdown catches (six). Of the 27 touchdown passes allowed by Texas, only two have been caught by a tight end. One of those scores, however, was recorded in a 23-21 loss to Iowa State on Nov. 16. One of the options that Texas has defensively against Kuithe is Foster, a hard-hitting nickel back who has 32 tackles and an interception over his eight games.

The Big 12 qualified six teams for bowl games, but the conference is 0-3 in the postseason so far. Oklahoma State was beaten 24-21 by Texas A&M in the Texas Bowl. Iowa State lost 33-9 to Notre Dame in the Camping World Bowl. And Oklahoma was humiliated 63-28 to No. 1 LSU in the CFP semifinals. Texas and Kansas State (vs. Navy in the Liberty Bowl) can get the Big 12 into the win column on Tuesday, and Baylor (vs. Georgia in the Sugar Bowl) plays Wednesday. Utah’s Pac-12 opened bowl season with a 38-7 win but also has suffered 49-24 and 31-21 defeats.