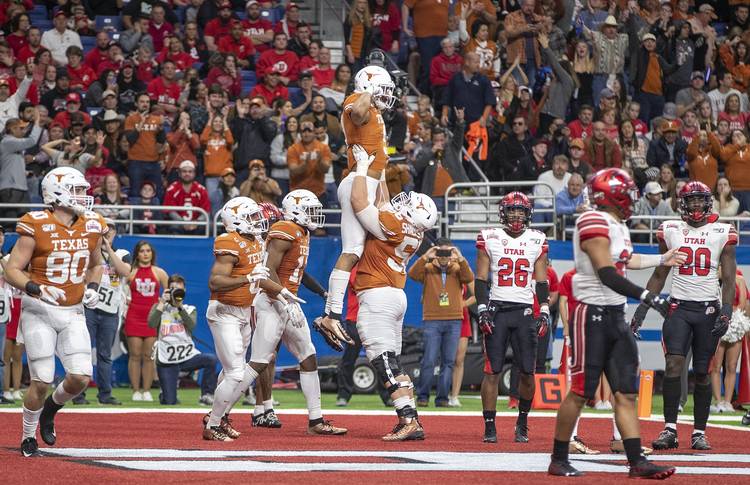 Texas wide receiver Collin Johnson (9) celebrates a score in the second quarter against Utah Utes during an NCAA college football game at the Valero Alamo Bowl at the Alamodome on Tuesday, December 31, 2019 in San Antonio, Texas. [RICARDO B. BRAZZIELL/AMERICAN-STATESMAN]

Revisiting our five pregame questions that were facing the Longhorns ahead of Tuesday’s 38-10 win over Utah in the Alamo Bowl. How they played out:

1. Did Collin Johnson return for his Longhorns finale?

And he finished his career on a high note, breaking open for a 34-yard pass on the very first play of the game and later adding his first touchdown pass since Nov. That was his 15th career touchdown; only 10 other Longhorns have caught that many in their careers. It was a fitting end for Johnson, who considered joining Lil’Jordan Humphrey by leaving school early last year for the NFL but chose to come back for his senior year. Two separate hamstring injuries cost him six games this season, including the last three heading into Tuesday. He finished with three catches for 62 yards and a touchdown.

2. Who ended the season as Texas’ sacks leader?

And he won the sacks title in style, stuffing Utah’s Tyler Huntley three times Tuesday night. He finished the season with five sacks, helping this year’s defense avoid a dubious distinction: Since 1975, Texas has never had at least one player who didn’t record at least four sacks in a season. Ossai’s three sacks were the most a single player has had on the Utes this season.

With 201 yards against Utah, Ehlinger finished this season with 3,663 passing yards — the second-best single season in UT history. He passed 2009 Colt McCoy for second place during Tuesday night’s game but is still short of 2008 Colt McCoy’s season of 3,859 yards. That’s a 176-yard difference. Utah’s pass defense ranked 12th in the country; the Utes were allowing only 185.9 yards per game.

4. Did Texas keep Utah’s Zack Moss out of the end zone?

Moss, who has produced three 1,000-yard seasons in his career, had 16 carries for 57 yards and, most importantly, no touchdowns. Texas had allowed six 100-yard rushers this season. Moss, who is Utah’s all-time leading rusher, had scored nearly half of the team’s rushing touchdowns (he has 15 of the Utes’ 34). Interestingly, Moss failed to rush for a touchdown in only three games this season. The Utes lost all three.

Herman, who is now 25-15 at Texas, improved to 4-0 in bowl games as a head coach. He led Houston to a 2015 Peach Bowl upset of Florida State, then has notched bowl wins with the Longhorns in 2017 (Missouri, Texas Bowl), 2018 (Georgia, Sugar Bowl) and Utah (Alamo Bowl). He didn’t coach Houston’s 2016 Las Vegas Bowl loss to San Diego State. Winning bowls is nothing new, though. Herman was 4-2 in bowl games as a FBS coordinator.

RELATED: Golden: Texas isn’t back, but this outgoing senior class has moved the needle forward