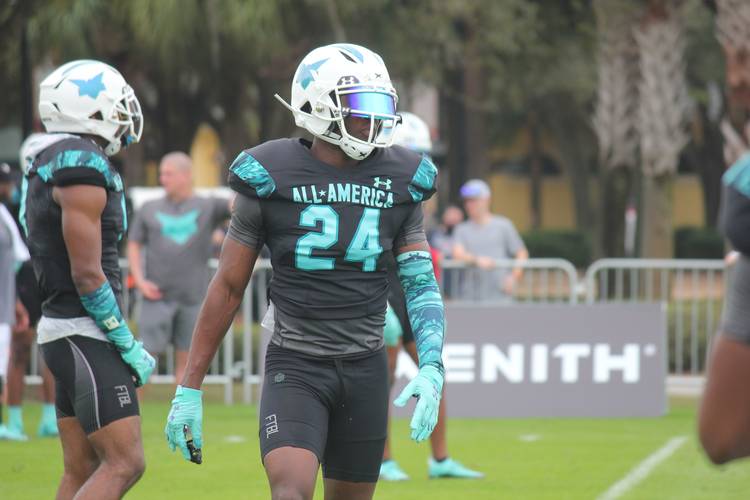 ORLANDO — Change is coming to Texas’ defensive scheme if the recent signees are right. Four-star defensive end Vernon Broughton and four-star cornerback Kitan Crawford are among five UT signees in Orlando for the Under Armour All-America Game, which takes place Thursday afternoon on ESPN.

The duo was among the 17 prospects who signed with Texas in December. Early conversations with new coordinator Chris Ash suggest the Longhorns will move to a four-man front.

“Coach Ash told me we’ll be running a four-man front. To be honest, I don’t care. That’s for the coaches to decide,” Broughton said after practice on Tuesday. “I’ll play wherever I can help the team win, whether that’s inside or outside. My burst with my size makes me a guy who can play different spots. I just want to get on the field.”

Broughton is a 6-5, 286-pound defensive lineman who is still scratching the surface as a football player. The big man from Houston Cypress Ridge was a basketball player until his mom, Yolando Wells-Broughton, suggested football before his sophomore year. She also possessed the foresight to push Vernon toward early graduation.

“I’m ready to get in that weight room and do work,” he said. “Enrolling early should be a huge advantage. That’s an extra five months compared to other players in my grade. I’m going to get huge and know the system. It’s a blessing to have her in my corner. If she wasn’t here, I wouldn’t be even playing football. She wanted me to try and out and I’m here. Mom knows best.”

Broughton ranks ninth on the 2020 Fabulous 55. He’s practicing at defensive end in Orlando despite his ranking as the 11th-best defensive tackle prospect in the nation, per 247Sports’ composite ratings. He’s admittedly raw as a player, so he’s using this week as a learning tool before moving to Austin in mid-January to begin classes and join the football team.

“I think I’m doing well considering the talent level here and how much I’m learning. I get to go against the best players and learn from some great coaches,” Broughton said. “I’m still new to the sport, so I’m soaking it all in and having fun with it.”

Crawford is a life-long football player from Tyler John Tyler. The 5-11, 200-pound defensive back starred at cornerback and running back at the East Texas powerhouse. He rushed for more than 1,000 yards as a senior and returned an interception for a touchdown. Crawford is working at nickel and safety this week.

“It’s an honor to be here among the best players in the nation. This isn’t something most people get to experience. I’m trying to soak it in and get better,” Crawford said. “The defensive backs coaches here are telling me money position is at nickel and strong safety. It makes sense because of my style of play and size.”

This week is building Crawford’s confidence as he heads into his final semester of high school.

“These events build confidence. I questioned whether I was good enough for this stage when I was first invited,” he said. “It’s just football after a few days of practice, so yeah, it feels good to come out here and know you can belong with the best of the best.”

Crawford was happy to put recruiting behind him.

“It’s relaxing to have the recruiting process done and I’m excited about the future,” Crawford said. “I talked to defensive coordinator Chris Ash. He told me that he can’t wait to meet me in person and for me to get to work this summer in Austin.”