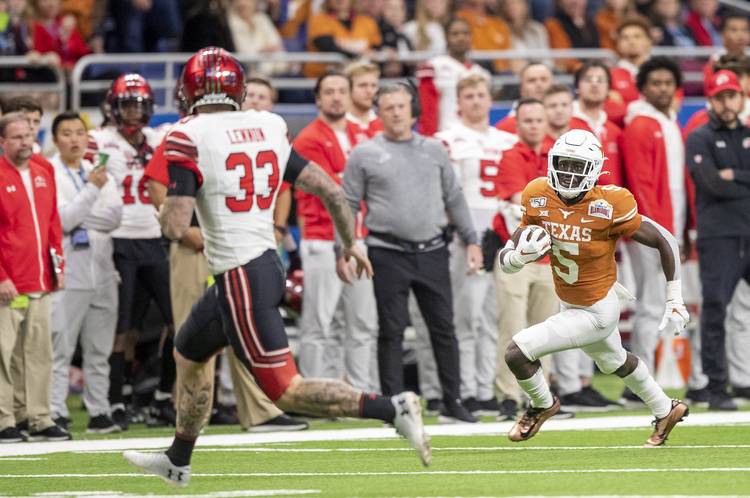 Texas defensive back D'Shawn Jamison (5) returns a punt against Utah in the Alamo Bowl on Dec. 31, 2019 in San Antonio. [RICARDO B. BRAZZIELL/AMERICAN-STATESMAN]

SAN ANTONIO — There were 116 snaps taken in Texas’ 38-10 win over No. 11 Utah in the Alamo Bowl on Tuesday. Here are five that ended up making a big difference:

Due to a hamstring issue, Texas senior Collin Johnson had missed UT’s last three games. He was quickly melded back into the game plan, though. On the first snap, quarterback Sam Ehlinger found him for a 34-yard gain.

That would be the longest play on a drive that ended with Cameron Dicker’s 29-yard field goal. It marked the fifth time this season that Texas had scored on its opening possession. On the ensuing Utah drive, Texas held steady and forced a first-possession punt for only the third time this year.

Thanks to the aforementioned field goal, Texas led at the end of the first quarter for the first time since the seventh game of the season. Two plays into the second quarter, the Longhorns got an even bigger boost from their special teams.

D’Shawn Jamison returned a punt 71 yards to the Utah 6. That set up a touchdown pass between Ehlinger and Johnson. Texas maintained a double-digit lead for the rest of the evening.

The punt return was the longest-ever for Texas in a bowl game, eclipsing Jackie Field’s 60-yarder in the 1943 Cotton Bowl. Had Jamison not been caught by Utah’s JaTravis Broughton, he would have become the ninth Longhorn with two career touchdowns off punt returns. Jamison scored on a 90-yard punt return at Kansas State in 2018. He also had a 98-yard kickoff return this season against Rice.

Texas kept Utah off its side of the field for much of the first half. But just before halftime, the Utes had a promising drive stall after reaching the Texas 35. Utah was done in by two penalties and a Joseph Ossai sack, but a significant play was also made in the secondary.

Utah’s Tyler Huntley took a shot on third-and-23 near midfield, throwing deep to Samson Nacua. But Chris Adimora was tightly defending Nacua and the freshman broke up the pass. Had Nacua caught it, he would have either scored or set Utah and its three timeouts up inside the Texas 10 with less than 20 seconds to go.

I'd argue this PBU by Chris Adimora is among the best Texas defensive plays of the season. pic.twitter.com/9BCJCgAHrw

The pass breakup was Adimora’s second of the season. In a 36-30 win over Oklahoma State on Sept. 21, he swatted away a fourth-quarter pass in the end zone.

With Texas ahead 17-3 in the third quarter, running back Keaontay Ingram recorded a 10-yard run to the Utah 20. On the play, Ingram took a pitch from Ehlinger and then hurdled defensive back Tareke Lewis.

The play drew a roar from a pro-Texas crowd of 60,147 for more than one reason. Back behind the line of scrimmage, defensive lineman Maxs Tupai was flagged for an unsportsmanlike conduct after he tried to keep Ehlinger pinned to the ground. Three plays later, a charged-up Ehlinger scored on a six-yard run.

On Tuesday, Ingram became only the third player this season to average over five yards per carry against a Utah team that ranked first nationally in rushing defense. (Utah slipped to third after surrendering 231 yards to Texas). The sophomore scored on an 11-yard catch and a 49-yard run. His 108-yard evening was Texas’ 21st 100-yard rushing performance in a bowl game.

5. Saved the best for last

Closely defended throughout the night by nickel back Javelin Guidry, Texas senior Devin Duvernay was limited to three catches. All three receptions, though, were highlight-reel snags. Two of them helped put away the Utes.

Remember when Devin Duvernay was snubbed from the major postseason awards?

After Utah pulled within 24-10 in the fourth quarter, Texas pieced together a seven-play scoring drive. An over-the-shoulder catch by Duvernay helped Texas move 37 yards on the possession. He also scored on a 15-yard play that featured a leaping catch and a pass interference call on Guidry.

Duvernay finished his final season at Texas with 106 catches and 34.6 percent of UT’s receptions. Only Jordan Shipley’s 116 catches in 2009 have bested Duvernay in the UT record book.