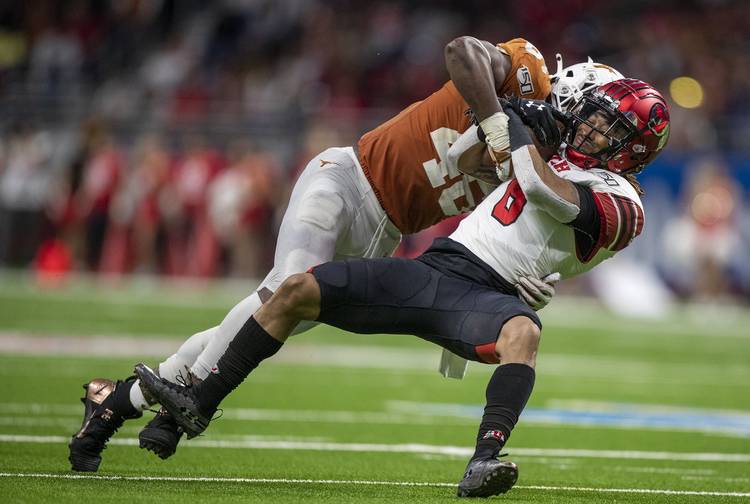 SAN ANTONIO — Tuesday night’s 38-10 win over Utah in the Alamo Bowl served as a homecoming for three Texas starters.

Offensive lineman Derek Kerstetter, who attended nearby Reagan High, and Cibolo Steele safety Caden Sterns made the 28th and 21st starts of their careers. The Longhorns also trotted out sophomore linebacker Cort Jaquess, a San Antonio Churchill product, with their first-team defense. It was his first career start.

Jaquess, who has primarily been used on special teams this season, recorded his first-ever tackle on Utah’s first play. He finished the night with five stops. Jaquess, whose father lettered at Texas in the 1980s, joined the team in 2017 as a walk-on and was placed on scholarship in August.

“Oh, yeah, Cort’s a great story,” Texas coach Tom Herman said. “You know, if there was a scout team player of the year award, he would have won it probably back-to-back years. He’s really tough, really physical and just understands football.”

The Longhorns entered the game with a depleted linebacking corps. Freshmen David Gbenda and Byron Vaughns had been sent home for a violation of team rules. Additionally, Herman said the team’s game plan had Joseph Ossai and Jeffrey McCulloch playing closer to the line of scrimmage.

The shift for Ossai worked wonders. One year after he recorded a team-high eight tackles in the Sugar Bowl, Ossai was named the Alamo Bowl’s defensive MVP. He had nine tackles, three sacks and six tackles for loss.

Behind Ossai, Texas held Utah to its lowest scoring output since a 10-3 loss to Washington in the 2018 Pac-12 championship game. The Utes were held to 128 rushing yards and 126 passing yards. Utah entered the game with the nation’s 27th-rated rushing offense (207.0).

Silver showings: The game’s top player on offense, quarterback Sam Ehlinger threw for 201 yards. Ninety-two of those yards were picked up by senior receiver Devin Duvernay, who had three magnificent catches.

“Sam did a great job putting the ball where I could get a chance in all three of those plays, and just made a play, come down with the ball,” Duvernay said.

Ehlinger finished his junior season with 3,633 yards. Duvernay, meanwhile, hauled in 106 passes for 1,386 yards. All three of those marks rank second in Texas’ record books.

Fourth-down follies:  The 38 points tied for the seventh-most points scored by Texas in a bowl game. The Longhorns wasted an opportunity to score more in the second quarter, though.

Following a timeout, Ehlinger attempted to locate the sure-handed Duvernay on a fourth-and-2 play at the Utah 8. The ball, though, was snagged by Utes nickelback Javelin Guidry. The play was initially ruled an incomplete pass but Guidry, who starred at Cedar Park, was awarded an interception after a review. That moved the Utes’ starting line of scrimmage back to the 1-yard line.

Texas went for it on fourth down 19 times this season. The Longhorns converted seven of them, a 36.8% success rate that was Texas’ worst since going 2-for-8 in 2001.

Last year, Texas was 12-for-15 and ranked behind only Army (86.1%) in fourth-down conversion percentage.

Texcetera:  With 102 yards, Keaontay Ingram provided Texas with its 21st 100-yard performance in a bowl game. That was last accomplished by Malcolm Brown in the 2013 Alamo Bowl. … UT junior safety Chris Brown left the game with an ankle injury. … With 0.5 sacks, Utah defensive end Bradlee Anae broke a first-place tie in Utah’s record book and finished his All-American career with 30 sacks. … A 71-yard punt return by D’Shawn Jamison that set up a second-quarter touchdown was Texas’ longest-ever in a bowl game.

RELATED: Golden: Texas isn’t back, but this outgoing senior class has moved the needle forward