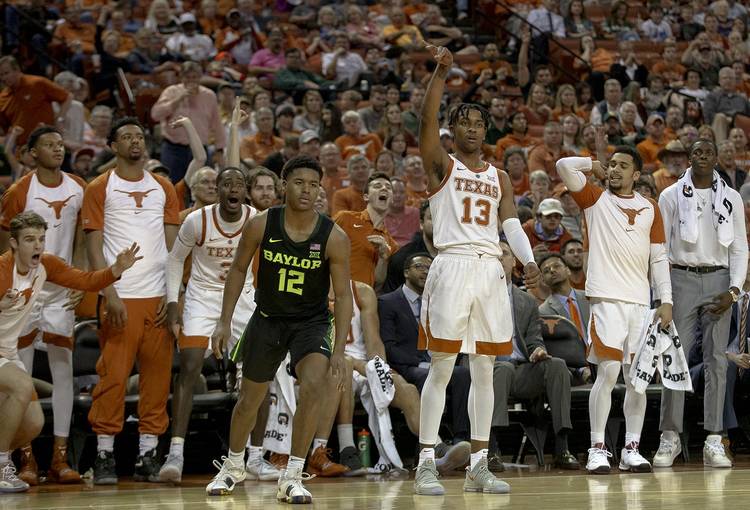 Texas guard Jase Febres (13) holds up his hand after making a 3-pointer against Baylor during an NCAA basketball game on Wednesday, Feb. 6, 2019, in Austin, Texas. [NICK WAGNER/AMERICAN-STATESMAN]

Every year, coaches and players say the same things about the start of Big 12 play.

“Well, I think the biggest thing, the conference season is a marathon for sure,” Texas coach Shaka Smart said this week.

His veterans know the proverbial drill, too.

“We need to ramp up our level details and our competitive effort to another level,” guard Andrew Jones said.

The Longhorns can talk until they’re burnt orange in the face, but there’s one inescapable fact that remains true every season. And it’s doubly important this year. Texas (10-2) must get off to a good start in Saturday’s league opener at No. 6 Baylor and in two home games next week.

Every conference game is big, they’ll tell you. Game 18 is just as important as game one, sure.

Considering Texas didn’t turn many heads with its non-conference schedule, it’s not a team that can afford to stumble in early January and be a non-factor by Valentine’s Day. This is a team that needs to accumulate wins, likely at least eight of the Big 12 variety, to secure a spot in the NCAA Tournament.

There’s still a home game against LSU ahead on Jan. 25. But the easiest way to get into the NCAAs is to finish at least .500 in league play.

Baylor (10-1) has already logged impressive wins against Villanova, Arizona and Butler — all top-25 wins at the time.

“You know, probably nobody in the Big 12 is going to go undefeated, right?” Smart said. “Everybody takes lumps at different times. These are games that, a lot of times, come down to your mindset and that of the other team. So we don’t control theirs, we control ours. And that’s where it starts.”

The Horns could well start by looking at last season’s video from the Ferrell Center.

The Horns were in cruise control. Guard Jase Febres hit seven 3-pointers as Texas ran up a 19-point lead with 14:49 remaining. But the Bears came crawling back, ultimately forcing overtime and winning 84-83.

Don’t blame Jaxson Hayes’ traveling call for that loss, although Matt Coleman III said he should’ve gotten open for that critical inbound pass. The loss was about the Horns’ inability to slam the door defensively despite shooting 50%.

Texas lost two of its next three games, then fell to Kansas in the Big 12 tournament and shuffled off to the NIT.

Saturday’s road trip comes hot on the heels of a pre-Christmas trip to Providence. The Horns played on their heels too much for Smart’s liking, couldn’t get transition points and swallowed a 70-48 loss. It was the total opposite of UT’s effort in a four-point win at No. 23 Purdue on Nov. 9.

“Yeah, I don’t know,” Febres said. “I feel like we just were out of sync, just as a whole. That game is one that we went through and learn from it and just bounce back. It’s nothing we’re going to hang our heads over.”

Players then went on a Christmas break and came back to the Erwin Center for a spirited effort against 3-10 High Point. Smart unveiled a new lineup in the 89-58 win, inserting Kamaka Hepa for the slumping Gerald Liddell.

But did this team learn any sort of lesson from the trip to Rhode Island?

“Truly learning the lesson means that we apply it in perpetuity. And that’s hard for young guys,” Smart said.

But that 2-0 start was flushed away with a lethargic effort in a loss at Oklahoma State, triggering two months of back-and-forth in the win column and no real consistency.

Has this team, led by veteran guards, learned from its past missteps? Have the Horns found the formula for consistency? There’s just no way to know for sure.

“Certainly for our older guys, we definitely use the previous years as learning lessons that we can learn from,” Smart said. “The guys did a really good job to start conference play last year, and can do the same this year.”

TCU’s first triumph in Austin snaps a four-game winning streak for No. 25 Texas