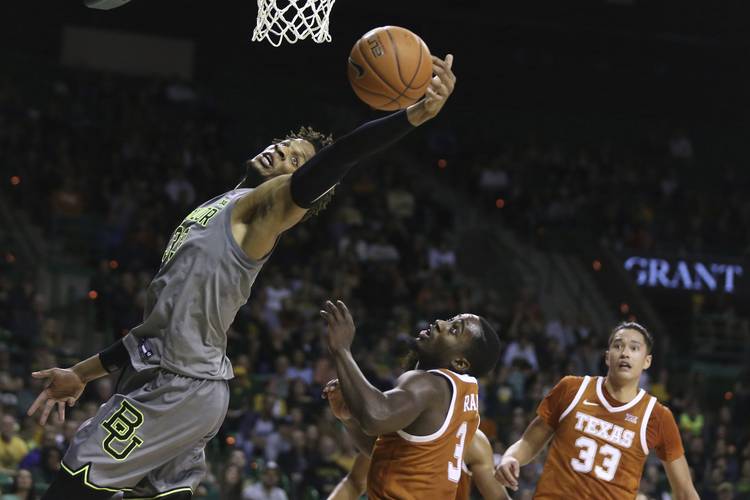 WACO — In a conference where the talent is spread somewhat evenly, in a sport where nobody is dominant, in a town where the locals rage against all things burnt orange, the little things do matter.

The Longhorns got schooled Saturday in basketball minutiae.

For example, when you give up two offensive rebounds on the same possession, expect the other team to swish a 3-pointer, as Baylor’s Jared Butler did in the first half.

If your shot gets blocked by the rim, as UT’s Courtney Ramey’s layup attempt was, better get back in transition. Otherwise, cold-blooded shooters like MaCio Teague will run down and drill a 3-pointer.

“On Monday, when we get to practice, maybe that’s all we’ll do is rebound,” Texas coach Shaka Smart said.

You can’t get beat on the boards by 13 and give up 21 second-chance points. You can’t miss 10 free throws. You can’t shoot 34.6% overall, make only three of 16 3-point shots and expect to win much of anything, really.

You can’t do any of that against a team like sixth-ranked Baylor or the end result will be a 59-44 loss, a debacle that set a new scoring low in Smart’s five seasons.

“I think our team has to get way better rebounding the ball, because that’s happened in other games as well,” Smart said. “The troubling thing is that it’s been a huge point of emphasis in practice. That definitely is something we have to get better at fast.

“Some of the other things,” he added, “I think we shoot the ball better most nights from the foul line, from the 3-point line, we’ve got to finish better around the basket. We’re a better scoring team than that in those areas. But the combination of that, giving up so many offensive rebounds, was the difference tonight.”

Taken in a vacuum, the 6-foot-9 Sims was just dominant. The junior had 13 points and 15 rebounds, his third career double-double. Twice, Sims put the ball on the floor, made an impressive move on his defender and threw down dunks. He could have easily had 20-plus boards if not for those pesky Bears knifing through the lane.

But Sims’ night — viewed by a handful of NBA scouts — will be long forgotten. The 6,063 fans at the Ferrell Center will remember how Baylor hustled after 19 offensive rebounds and got multiple extra chances time and time again.

“We’ve just been talking about it constantly since we started the season,” Sims said. “We’ve gotta be tougher, more physical, not allow teams to get the better of us on the glass. That’s really all it comes down to.”

Baylor’s Freddie Gillespie and Mark Vital both had six offensive rebounds each. Gillespie had 12 total. Four different Bears had at least six rebounds. Gobble up the loose balls like that, and your team can shoot 31.3% overall and still win by 15.

Compare that to the Texas side. Outside of Sims, Andrew Jones and Courtney Ramey had four rebounds each, Matt Coleman III had three and that was mostly it.

“First conference games, they are always a little bit amped up and a little excited,” Baylor coach Scott Drew said. “I am really pleased with how everyone contributed and that’s what you got to win the Big 12.”

Baylor used a series of mini-runs to carve out some buffer room. Early on, it was a 13-2 run nearly four minutes long, capped by Butler’s trey, that gave the Bears an 18-8 lead.

The Horns later got back within four on Ramey’s layup and Sims’ strong post move. But the Bears closed the first half with another 9-0 flurry, capped by back-to-back Texas turnovers.

Jones hit a free throw with 12:36 remaining, and Texas was still within six. But Devonte Bandoo hit a 15-footer, and Teague got fouled on a 3-point attempt and hit all three free throws.

Texas made only three of 14 shots in the final 10 minutes.

Smart used the same lineup he unveiled against High Point, starting Jones and the 6-foot-9 Kamaka Hepa. Jones was 3-for-9 shooting and had just nine points. “I Let go of the rope today and let my team down. I will bounce back,” he tweeted on the team bus afterward.

Hepa passed up multiple open 3-pointers, which Hepa was put into the game specifically to shoot. He went 0-for-2 from the floor in 29 minutes. Texas’ best 3-point threat, Jase Febres, was 0-for-5 from downtown and 0-for-7 overall.

Smart has to be concerned. Was this just one bad night? Or the start of a troublesome trend?

“Some of our guys need to be more assertive and aggressive,” Smart said. “It’s obviously something that we really emphasize to them, but when they get in the game, they’ve gotta have it in them to step up and shoot the ball.”

TCU’s first triumph in Austin snaps a four-game winning streak for No. 25 Texas