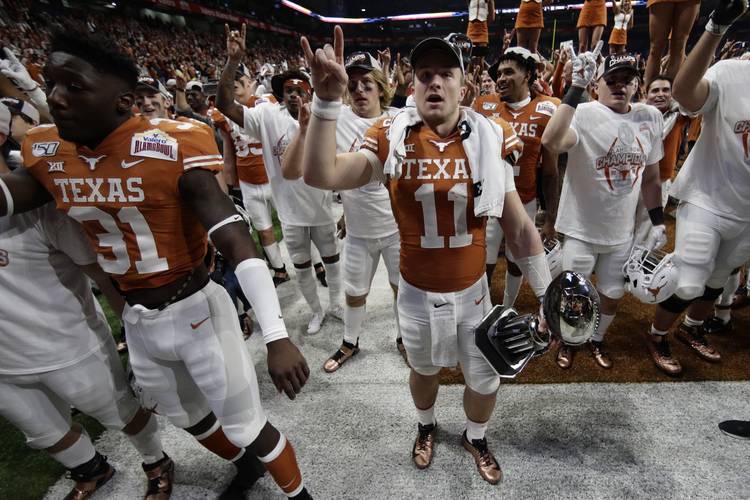 First, head coach Tom Herman gave him the keys to the Longhorns’ offense. By lunchtime, left tackle Samuel Cosmi announced he was returning for his senior season.

The dinner hour was even better. Sam Ehlinger, the quarterback with 8,870 career passing yards and 68 touchdowns, announced he was indeed coming back for his senior season, too.

When Ehlinger announced he would seek out information about his NFL draft status on Dec. 29, the social media freak-out went a little overboard, frankly. The Westlake product was merely doing what all draft-eligible players should do when they have NFL aspirations.

Texas’ problem was that too many underclassmen in recent years were told to stay in school, but few heeded that advice. Cosmi and Ehlinger likely saw how former teammates fell on draft day, some going totally undrafted.

“Honestly, going into this year, I didn’t really even think about (the NFL),” Ehlinger said before the Alamo Bowl. “I wasn’t considering that at all. So I just feel extremely blessed that’s even a question that’s being talked about.”

The next day, Herman said Ehlinger had already received his NFL draft grade. The College Advisory Committee evaluates each prospect and advises whether they would be a first-rounder, a second-rounder or if they should stay in school, meaning third round or lower.

Herman said Ehlinger would “absolutely” be coming back to Texas next season. The quarterback himself wasn’t ready to make that exact announcement, though. Ehlinger went out and accounted for four touchdowns in Texas’ 38-10 blowout win over No. 11 Utah.

“There’s a lot of young guys that have a lot of experience and are really, really good football players, so I’m very optimistic,” Ehlinger said afterward.

Yurcich, who led Oklahoma State’s dynamic offense from 2013-18, should feel the same way.

Based on the Alamo Bowl lineup, Texas has seven offensive starters coming back in 2020. It starts with Ehlinger, who will go into his senior year chasing Colt McCoy in Texas’ record book. He’s 20-13 as a starter over the last three seasons.

Running back Keaontay Ingram has 1,561 career rushing yards, but you could make the case he hasn’t hit full stride yet. A backfield with Ingram, Roschon Johnson and incoming freshman Bijan Robinson would be awfully compelling.

The Horns are losing Collin Johnson and Devin Duvernay, two receivers who showed their true value in the Alamo win. But Brennan Eagles (32 receptions, 522 yards, six touchdowns in 2020) returns. And Jake Smith will get full-time exposure in the slot position, where Duvernay shined.

That just leaves the offensive line. It appears assistant coach Herb Hand, who has one year remaining on his contract, is likely to stay through the current coaching shake-up.

Center Zach Shackelford is departing, and there’s no clear-cut heir apparent behind the four-year starter. Derek Kerstetter and Junior Angilau can hold down the right side at least. There’s not a coach in the Big 12 that wouldn’t take Cosmi. He was second-team All-Big 12 this season and has 26 career starts.

Cosmi’s Twitter announcement about coming back was his first public comments since Oct. 8. He was kept away from reporters the rest of the season after he spoke honestly about his feelings toward the Oklahoma defensive line.

At least that’s better than graduate transfer Parker Braun; reporters never spoke to the senior guard during his one year at Texas.

“It has always been a dream for me and my family to earn my degree,” Cosmi posted on social media. “I’m so excited to get back to work with my brothers and work toward a championship! Go Horns!”

Hand tweeted, “Excited to continue working together with @SamCosmi to help him develop his skills and maximize his abilities.”

How does Yurcich feel about all this? Both he and new defensive coordinator Chris Ash likely won’t speak publicly until the entire coaching staff is completed. Herman is likely to unveil the entire 10-man staff at once upon completion.

Texas fans would prefer results over talk anyway. The Longhorns went 8-5 this season and fell back as a program after reaching the Big 12 championship game in 2018.

Herman is currently remaking his staff, but he’s got plenty of pieces already in the locker room. In addition to an experienced offense, Texas has nine defensive starters returning and a slew of underclassmen who got lots of playing time this season due to various injuries.

No, Oklahoma coach Lincoln Riley was not named the new head coach of the Dallas Cowboys, as many wanna-be general managers figured. So the Big 12 champions aren’t likely going anywhere.

But at least Texas’ offense is set with cornerstones in Ehlinger and Cosmi with Yurcich leading the way.

After the Utah win, Ehlinger said this young team learned a lot about playing together. “Our talent can take us pretty far,” he said, “and then once you add mistake-free football, watch out.”