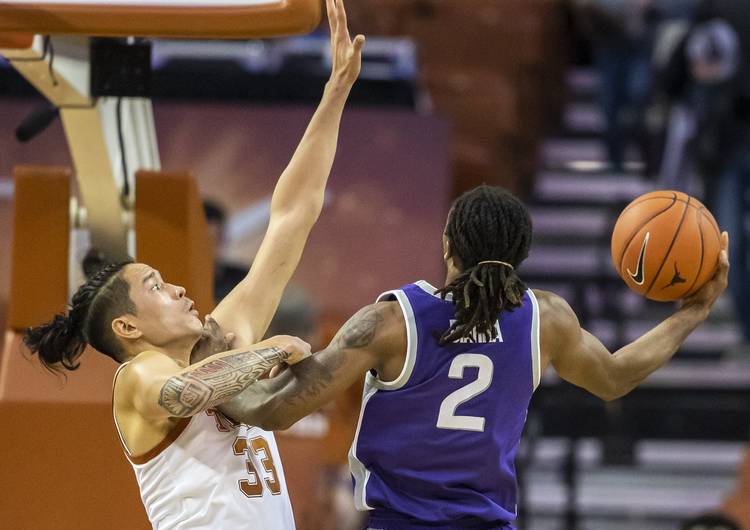 Eleven days into 2020, Kansas State coach Bruce Weber and his Wildcats already have the craziest travel story for the year.

The team charter couldn’t leave Manhattan, Kan., on Friday due to icy conditions. They were then scheduled to leave at 8 a.m. Saturday, 11 hours before tipoff at Texas. But mechanical issues caused another delay.

“Then, they told us to come back to the airport,” Weber said. Then, it was another two-hour delay sitting on the tarmac.

After a madcap scramble, another plane — one earmarked for Baylor playing at Kansas — was located in Kansas City. That plane jetted over to Manhattan, brought the Wildcats to Austin by 3 p.m., then flew back to Kansas City to bring the victorious Bears back to Waco.

After all of that, Texas still beat K-State 64-50 at the Erwin Center. The Longhorns (11-4, 1-2 Big 12) grabbed their first league victory of the season and became the 18th Division I school to win 1,800 college basketball games.

“Not a fun day, but Texas didn’t care,” Weber said. “They sure didn’t feel sorry for us.”

The Wildcats (7-8, 0-3) went straight back to Austin-Bergstrom International knowing they just wilted under the Horns’ second-half pressure. Texas blocked a season-high nine shots and forced six shot-clock violations in the second half alone.

Jase Febres, UT’s 6-foot-5 shooting guard, had a career-high four blocks. “I used to do that in high school,” Febres said with a smile. “I’m a little guy now.”

Febres and his teammates were indeed smiling again. It’s been a while. Texas had lost three of its last four games and lost all the momentum from a 10-win start. With this win, the Horns let some steam out of the pressure cooker.

It’s the second time this season Texas has won despite committing at least 20 turnovers. And it came against a team many believe will finish at or near the bottom of the league standings.

“When you come up with a good win, which any win in league play is, you’ve got to build on it,” UT coach Shaka Smart said. “You’ve got to capitalize. Our guys, the last week, they’ve really, really been through some soul searching as a program.”

“It’s like, hey, we have to be better than this,” Smart said. “There’s no one outside of this room that’s going to create that. That has to come from us.”

Smart’s touchstone of success is defensive intensity. He believes whole-heartedly that if the Horns play with wild abandon on that side of the floor, the offense will come on the other.

Texas had a 31-27 halftime lead thanks to Kamaka Hepa’s buzzer-beating 3-pointer. When the players returned, the Horns put some serious clamps on K-State veterans Cartier Diarra and Xavier Sneed.

The Wildcats did not score a single point in the first eight minutes of the second half. Their first bucket came on a basket interference call on UT’s Kai Jones. During that run, Texas forced three shot clock violations. Febres had a monster block on Makol Mawien in the paint that he’ll love to watch on film.

Guard Matt Coleman III said the Horns aim for 32 deflections per game, either a ball deflection, block or something as simple as forcing the guard to flinch or change direction. Get 32 deflections, and UT’s chances of winning go up dramatically, the coaches believe.

“We just took pride on defense and it carried over to the offensive end,” Coleman said.

Assistant coach Luke Yaklich, the de facto defensive coordinator, was on the sideline waiving his arms around with a clipboard like a wild man at times.

“You’re able to guard a team 30 seconds for six times, that’s a big deal,” Febres said. “Just doing it one time is a big deal. So we want to make sure we put an emphasis on doing the little things and being excited about getting stops.”

It helped that Texas hit 10 3-pointers. Even freshman Will Baker, who was 0-for-15, finally banked in his first trey as Longhorn. Coleman finished with a team-high 14 points while Courtney Ramey had 11 and Febres added 10.

Jericho Sims, who has been dominant at times in recent games, had eight points and eight rebounds. His team-high five turnovers will get some scrutiny by opposing coaches around the league.

Coaches will be studying the low scoring totals from around the league, too. The Big 12 has always been defensive oriented, but some of these rock fights look wretched.

“There’s some games that are not necessarily a work from Picasso in terms of offensive production,” Smart said.

Texas can paint itself right back into the mix with a win Wednesday at Oklahoma State, another team that’s struggling at the moment. Get back to 2-2 in league play, and Texas will have some traction.

“It’s all about finding a way to win,” Smart said.

After a long Saturday, Kansas State just wanted to find a way home.