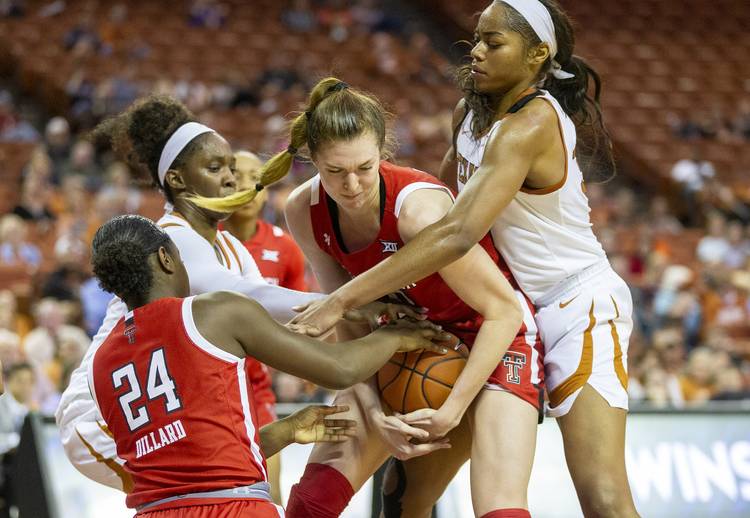 Texas guard Lashann Higgs (10) and forward Charli Collier attempt to wrestle the basketball away from Texas Tech's Nailah Dillard (24) and Brittany Brewer (20) in Austin on Jan. 15, 2020. [Stephen Spillman for Statesman]

In Texas’ first three games of conference play, the fourth quarters had been a problem for the Longhorns.

They lost a last-minute lead in a loss to TCU. It happened again in Sunday’s 68-63 slip-up at West Virginia. Even in their league win, an 81-75 victory over Iowa State on Jan. 6, they had to hold off a late surge by the Cyclones.

But on Wednesday night, the fourth quarter was a mere afterthought.

Texas, behind Charli Collier’s 10th double-double of the season, steamrolled Texas Tech 92-66 at the Erwin Center. The Longhorns (10-6) evened their Big 12 record at 2-2.

“I thought it was very important for us to come out today the way that we did,” senior guard Sug Sutton said. “We all felt like it was the end of the world after we lost to West Virginia. But it was my job to bring the team together and make sure that they knew that we had another game and that it was one game at a time in this league.”

It was expected that the 103rd meeting between Texas and Texas Tech would be decided in the paint. The Red Raiders start four guards but 6-5 Brittany Brewer had been the team’s heartbeat over a 12-2 start. A two-time Big 12 player of the week, she was averaging 15.9 points per game.

More impressively, Brewer had blocked 74 shots in 14 games, a 12-swat lead over UConn’s Olivia Nelson-Ododa nationally. Her 74 blocks were more than all but 38 out of 348 Division I women’s programs.

Texas, though, had some height to throw back. Like Brewer, Collier also is 6-5. And senior forward Joyner Holmes is 6-3. Collier scored 17 points in the first half, 11 of those in the first 3:58.  Often going at Brewer, she added 13 points before halftime.

Behind Collier and Holmes, Texas led 47-31 at halftime.

“Brewer’s an amazing player. I’m blessed enough to play against someone of her caliber. I mean, she’s a draft pick,” Collier said. “It was just a good matchup. We just took it to her and she took it to us. Our guards went after their guards. It was just a competitive game.”

Paced by its bigs over the first 20 minutes, Texas got 18 points from five guards during the third quarter. The 21-15 score in the third quarter helped UT extend its lead to 22 points. In the final frame, UT’s lead fluctuated between 22 and 31 points.

Collier finished with 23 points and 12 rebounds while Holmes had a 17-point outing. Senior Lashann Higgs and sophomore Audrey Warren both chipped in 10 points.

“If we can play hard for all four quarters, we can be really good,” Collier said. “If we just continue to play defense on all possessions and execute on offense like how we did tonight then we can be a real good team.”

Texas Tech (12-3, 1-3 Big 12) led by four points in the first quarter, but the Lady Raiders were playing catch-up for much of their trip to Austin. Texas Tech shot 36.5 percent from the field and made just two of the 15 three-pointers it attempted. Brewer notched 16 points, seven rebounds and two blocks.

“In this conference, you’ve got to knock down open shots,” Texas Tech coach Marlene Stollings said. “Two of 15 from the three-point line, that’s not going to win you a lot of games.”

Notes:  Texas started four guards (Higgs, Sutton, Celeste Taylor and Jada Underwood) and Collier; in each of the previous seven games, the lineup included four of those guards and Holmes instead of Higgs. … Collier is the first Longhorn to record 10 double-doubles in a season since Imani McGee-Stafford in 2016. … The 47-31 lead at halftime was the 11th time this season Texas has led at the break, and it was by the second-biggest margin yet. Only the 27-point advantage in a 93-39 rout of Southern on Nov. 24 was bigger. … Chrislyn Carr also scored 16 points for Texas Tech. … Texas plays at Kansas State (7-7, 1-2) on Sunday afternoon.