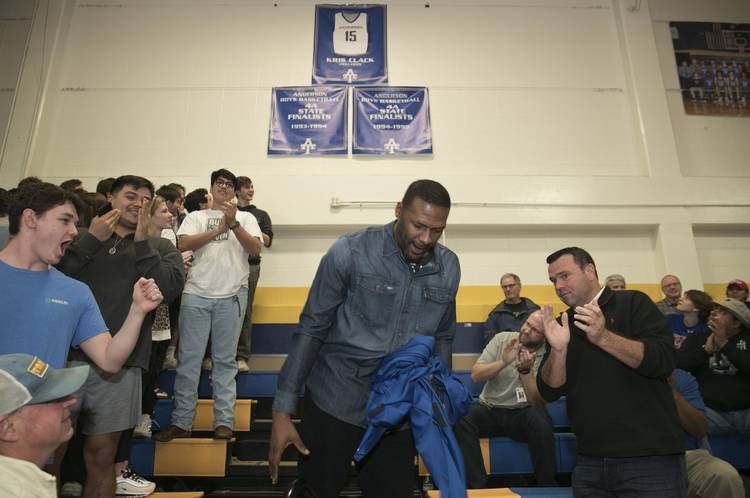 Moms know everything, and in Kris Clack’s case, his mother couldn’t be fooled.

Sometime in the early 1990s, Annette Clack said she remembers walking around a local football field and saw the youngest of her four children.

“I looked up and he’s crying. He said, ‘It’s cold,’” Annette Clack said Friday. “I said, ‘You knew it was going to be cold!’ He knew right then football was not for him.”

Kris Clack stuck with basketball, a game his three older sisters played and his parents loved. Annette and her husband, George, gave no quarter there, either.

“I tell the story all the time, I lost a Little League game and I was crying and upset,” Kris Clack said. “My mom was like, ‘Boy, stop crying. It’s just a game.’”

Tough love pushed Clack to become the first McDonald’s All-American to sign with Texas. It pushed him to become a freshman starter — something rare in the mid-1990s — and ultimately a professional athlete, a second-round pick with the Boston Celtics.

Annette was moved to tears Friday night when her son had his No. 15 jersey retired at Anderson High School.

For school officials to retire Clack’s jersey 25 years after graduating, it says something about the impact he’s had on friends, teammates and who the 42-year-old has become.

“Well, I see that every day,” Annette Clack said, her eyes welling with tears. “The man he is.”

Before Anderson’s boys varsity game Friday night, players from the school’s two state championship appearances were honored in the gymnasium. Clack pulled a drape off three small banners that highlighted his jersey and the 1993-94 and 1994-95 squads.

All the hubbub was a tad embarrassing. Clack was always a team-oriented athlete. “It’s not about me,” Clack said multiple times Friday. “It was about what i was able to accomplish with great teammates and great coaches.”

Times have changed, though. When local TV stations asked Clack before the ceremony if he had any old highlights, Clack scrounged around to find found four VHS tapes. He had to “blow the dust” off some of the old mementos on display, including his 1999 Big 12 championship ring and T-Ring.

Tom Penders, who signed Clack to join the Runnin’ Horns, wasn’t going to miss this moment. Penders, his wife Susie and several former Longhorns, including DeJuan “Chico” Vazquez, were part of a small, private dinner beforehand.

Clack is widely considered one of the best all-around players in UT history. He played three years under Penders and his senior season under Rick Barnes during the 1998-99 season. When Clack finished, he ranked seventh in scoring (1,592 points), fourth in rebounds (771) and second in steals (239).

“Kris did everything I expected of him and more,” Penders said. “Not too many freshmen start, and he had some things in his game that allowed him to play right away, which was defense, shot blocking, rebounding. We just had to work on his shot a little bit.

“If I could teach Reggie Freeman how to shoot from distance…,” Penders added before his voice trailed off.

Penders was swelling with pride that Clack has gone into his chosen profession. Clack is now a junior varsity basketball coach at LBJ.

“I bled orange before I got there, even before I took any college visits because I knew where I wanted to go,” Clack said. “Even if guys begged me to go here, go there, I’m just born and raised Texas.”

Clack was presented with a plaque, that was “long overdue,” declaring him the 1994-95 Anderson athlete of the year.

“I walk around town and people see me and they always mention that and bring that back up…Every time someone does that it brings back memories." pic.twitter.com/RldSUoHSlV

Probably the only two people Clack wished could be there were his father George, who passed away July 10, 2018, and his high school coach, the late Tyrone Johnson.

“When I got moved up to varsity, I didn’t have a choice,” Clack said. “Coach Johnson just handed me a jersey. I don’t care about accolades. I just want to play basketball. He gave me the jersey, and I kept it ever since.”

Raised in a Catholic household, Clack learned the importance of hard work and treating people right. George Clack worked for the city’s parks and recreation department and logged 18 years with the Austin school district. His mother worked from 11:15 p.m. to 7:15 a.m. at Advanced Micro Devices.

“My parents always taught me to do things the right way, and I felt if I was a good person, that karma would come back to me and I would be able to look in the mirror and be happy about myself,” Clack said. “That’s just the way I was raised.”