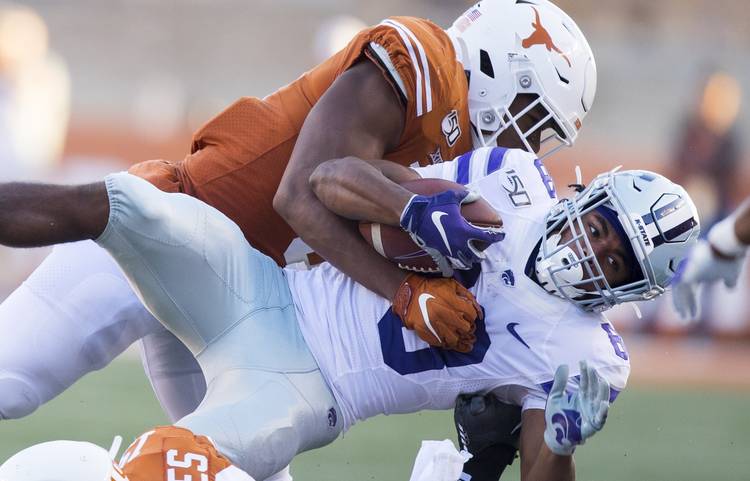 The class has already been marred by transfers, position changes and injury. Here is the first-year report card for each defensive player signed in 2019. We graded the offensive signees on Thursday.

Sweat was grossly under-ranked as a three-star defensive tackle out of Huntsville. He exceeded expectations by earning a role within the rotation as a freshman and planted his flag among Texas’ top defensive linemen by recording nine tackles and a sack in nine games, including a strong performance in the Alamo Bowl win over Utah. The move to a four-man front under new defensive coordinator Chris Ash should create more opportunities for him as a sophomore.

The four-star defensive end took a redshirt in 2019.

Jones, a four-star end, was expected to make a bigger impact as a JUCO transfer. But he couldn’t quite find a role in former defensive coordinator Todd Orlando’s system. Jones should fit more naturally into a four-man front. He played in 11 games, registering 14 tackles.

The three-star defensive end took a redshirt in 2019.

Stenosis forced the four-star inside linebacker to retire from football. He was the Longhorns’ highest-rated defensive signee.

Mitchell, a three-star inside linebacker, was the Longhorns’ lowest-rated signee in the class and overachieved. He was a playmaker from the middle linebacker position in each of the 11 games he played. He was a physical presence with more athleticism than the other options at middle linebacker. He recorded 39 tackles, three sacks and broke up four passes.

The three-star outside linebacker never played a snap. The JUCO transfer entered the portal before the start of the season and is now enrolled at UCLA.

The four-star inside ‘backer flirted with a position change to running back before fellow 2019 signee Roschon Johnson filled the gap. Gbenda ended up playing in four games and kept his redshirt. He was suspended for the bowl game.

The three-star outside linebacker played in the first four games and was on his way to burning his redshirt before a knee injury in the Oklahoma State game ended his season.

Owens’ potential flashed numerous times as a freshman. He played in all 13 games, recording eight tackles. He was also one of the top players on coverage units. Injuries to other defensive backs forced him into action quicker than expected, but he overcame some early-season mistakes to play his best game of the year against Utah.

Injuries in the secondary forced Adimora into extended action. He passed the tests and provides Texas with another young, talented safety to groom behind starters Caden Sterns and B.J. Foster. Adimora played in all 13 games, finishing with 10 tackles and two passes defended. His performance against Utah raised his season grade to a B.

Watson provided a glimpse of his talent in limited playing time as a freshman. He played in fewer than five games, so he retained his redshirt and should be in the two-deep as a sophomore.