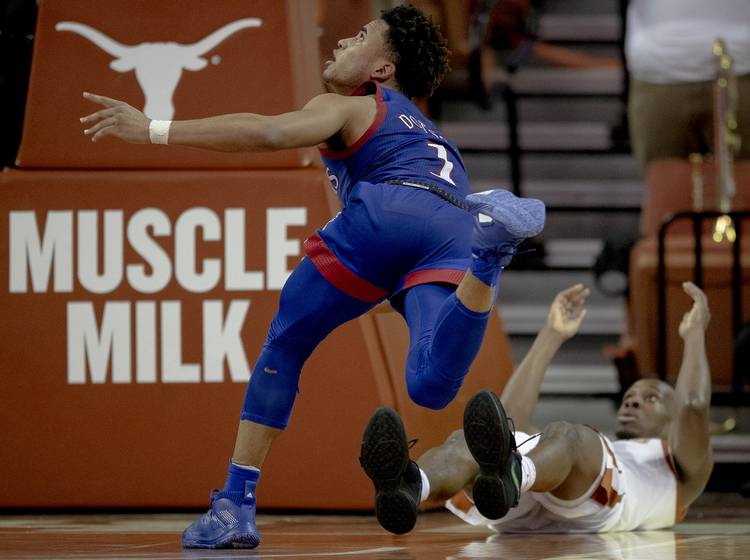 The names change, but Kansas’ dominance over Texas sure doesn’t. The basketball school keeps dunking on the football school.

The Jayhawks have the Big 12’s leading scorer. Devon Dotson missed the last game with a hip pointer, but he was cleared Saturday against UT. The 6-foot-2 sophomore rang up 21 points and buried a key 3-pointer with 2 minutes, 50 seconds remaining.

Coach Bill Self’s club has the most established big man. Self called UT’s Jericho Sims “the best athlete in our league,” but Kansas’ Udoka Azubuike had 17 points and nine rebounds, and he dominated after halftime.

The final score was 66-57, but Texas probably already knew who won, too.

The sixth-ranked Jayhawks (14-3, 4-1) won for the 20th time in the past 23 games against the Longhorns, who always play well but usually not well enough against the crew from Lawrence.

Texas (12-5, 2-3) hit five 3-pointers in the first half but went 1-for-9 after the break. Sims had a career-high 20 points, and Matt Coleman III added 10 more. They were the only two Horns in double figures, though.

Dotson and Marcus Garrett (13 points) simply put their heads down and drove to the bucket in the second half. Kansas’ perimeter defense was top-notch. And the home team, which had an eight-point lead in the first half, couldn’t get many open looks late.

“Garrett and Dotson, they went and won Kansas the game with the way they attacked,” UT coach Shaka Smart said. “In every timeout, we’re talking about it and we’re imploring it. But it’s just something our guards have to get better at.”

Smart would love to see his guards do the same thing. “That’s how you win in the Big 12 as a backcourt, going and grabbing the game,” he said.

Dotson knew if he was going to play at all, then he would have to go full bore. He’d missed a midweek game against Oklahoma and was considered a game-time decision Saturday. Self let Dotson choose his own rehab timetable, but the coach knew that morning his guard would be cleared.

“It felt great,” Dotson said. “It was fun playing around there and getting back into the swing of things.”

Maybe Dotson needed a half to get back up to speed. His driving layup with 11:38 remaining in the first half gave the Jayhawks a 17-13 lead. But Kansas wouldn’t get another field goal for almost eight minutes. Texas was 5-for-13 shooting during that span and could take only a 26-18 lead.

Smart lamented the fact that the Horns couldn’t get up by double digits. That would’ve been helpful down the stretch when Kansas turned up its defensive intensity on the perimeter.

“Credit to them, but I feel like at times we got a little stagnant,” Coleman said, “and I think we passed up a couple good shots that we should have taken initially and ended up taking a worse shot, I guess you could say.”

Throughout the day, Self and Smart played chess with their two big men. Sims would get a dunk off a nifty feed, then Azubuike would follow with an alley-oop. When Azubuike went to the bench, Sims was pulled to save energy and fouls.

Sims left the game about 90 seconds before halftime with what looked like a knee injury. But he returned with authority. On UT’s first possession in the second half, Sims went up into the ozone layer to throw down an incredible one-handed alley-oop dunk.

“He’s a really athletic young big,” Azubuike said. “He was really good for them today.”

Azubuike saw Sims’ dunk and got highly motivated himself. The big fella who goes by “Doke” had two dunks and two strong post moves for buckets to help Kansas take the lead.

From that point on, it was a back-and-forth affair.

UT’s Jase Febres appeared to draw a charging foul, but officials huddled together and changed it to a block. Replays showed Febres’ heel was touching the protective half-circle in the paint, which meant it was the correct call. Garrett completed the 3-point play, and Kansas led 59-54.

“When you’ve got a team making tough shots, it’s kind of hard,” UT’s Courtney Ramey said. “But we got to get past hard. We got to make them miss and grab the ball, ultimately.”

The total team contributions that Texas used to beat Kansas State and Oklahoma State just weren’t there against Kansas.

Courtney Ramey had eight points, but back-to-back turnovers at one point earned him a spot on the bench. Febres hit a 3-pointer but overall went 1-for-7 shooting. Andrew Jones had eight points but was 3-for-9. Kamaka Hepa, who again passed on some open looks, was just 1-for-2.

“Their guards outplayed our guards tonight,” said Smart, who complimented Kansas’ overall aggressiveness. “That being said, some of the plays we made are on us. We didn’t make aggressive enough plays, and we didn’t finish it off.”

Briefly: Texas officials had no update on an unidentified fan who was taken out of the Erwin Center via stretcher with eight minutes left in the second half. Emergency medical personnel responded to the situation directly behind UT’s bench.

“The thoughts of our whole program are with the fan,” Smart said. “Not sure what happened, but whatever episode that it was, just want her family to know that we’re thinking about her.”