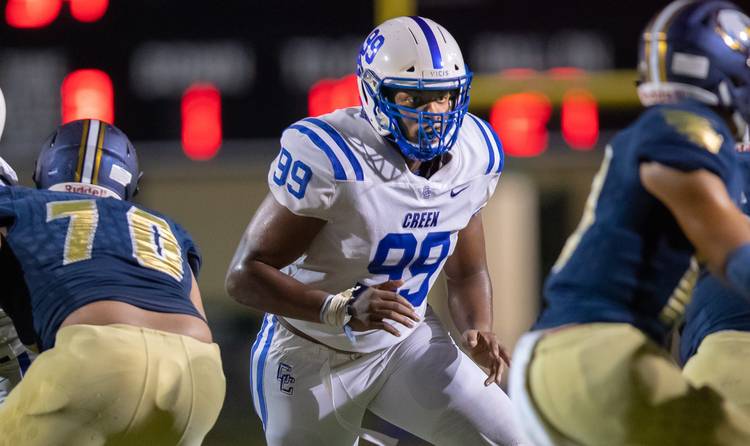 Local defensive linemen Alfred Collins and Princely Umanmielen are among the seven uncommitted prospects left on the updated  Fabulous 55. The duo was on campus Saturday, surrounded by dozens of top targets in the 2021 and 2022 cycles. The Longhorns signed 17 players during the early period. Tom Herman hopes to add the pair to that list come Feb. 5.

Collins, a four-star from Bastrop Cedar Creek, is the second-highest rated uncommitted player in Texas following five-star running back Zachary Evans. Collins (6-5, 275) didn’t transition his focus from basketball to football until his sophomore year of high school. He’s continued to grow as a player, figuratively and literally, ever since.

Collins is a three-time all-district performer. He earned All-American status in January when he played for the West squad in the All-American Bowl in San Antonio. The 20th-ranked player on the Fab 55 recorded 253 tackles and 18 sacks over his three-year varsity career. He forced 10 fumbles and registered 74 tackles for loss.

Texas is competing with Oklahoma and Alabama for Collins’ signature. He’ll pick a school on national signing day. Baylor was in the mix before Matt Rhule left for the NFL.

Collins never felt rushed as a recruit. He maintained throughout the cycle that he’d take his time, and Collins stuck to his plan.

“I wanted to take my time and make sure I made the right decision,” Collins said on Saturday. “It was important to do my research and build relationships with coaches at my top schools before I picked a new home. It’s a life-long decision and I take it seriously.”

Umanmielen is a four-star defensive end from Manor. The 6-4, 249-pounder appeared destined for Baylor until Rhule’s departure. The one-time UT commit is considering the Longhorns again because the Longhorns are moving to a four-man front under new defensive coordinator Chris Ash. The two spent time watching film together during the Saturday visit.

“I talked to coach Ash about the new defense. He showed me the clips from his time at Ohio State and where I’d play on the edge,” he said. “The four-man front helps Texas’ chances. I was never thrilled about playing in the three-man front.”

Umanmielen is set to start an official visit to Florida on Friday. He’s planning on spending the final weekend before signing day at Auburn or Alabama. Auburn was the plan before the Crimson Tide coaching staff dropped by Manor recently to renew interest. Umanmielen also mentioned Oregon.

“I talk to the players on visits, so I’ll pick where I fit in the best and where I feel the most comfortable,” Umanmielen said.

He thought his first trip back to campus since de-committing in October would bring awkwardness. Umanmielen was pleasantly surprised.

“I thought it was going to be weird, but it felt normal. It was a good time,” he said. “Coach Ash seemed like a pretty solid dude. As a defensive lineman, it helps that coach Oscar Giles is still around.”