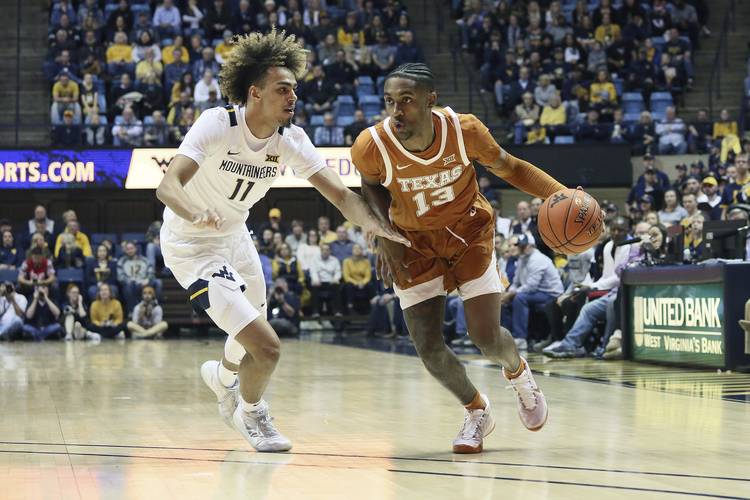 Texas guard Jase Febres drives it up court as he is defended by West Virginia guard Emmitt Matthews Jr. during the first half of an NCAA college basketball game Monday, Jan. 20, 2020, in Morgantown, W.Va. (AP Photo/Kathleen Batten)

MORGANTOWN, W. Va. — It was merely one game, one bad loss under a coach that’s had quite a few in his five seasons. Bad losses happen, even to the good teams.

But Monday night’s meltdown in Morgantown was something different for Texas and coach Shaka Smart.

West Virginia’s dominating 97-59 beatdown changes the dynamics for the rest of the season.

Athletic director Chris Del Conte wanted to avoid this issue as long as possible, but it’s out in the open and unavoidable. Smart is likely now coaching to save his job.

The 14th-ranked Mountaineers (15-3, 4-2 Big 12) humiliated Smart’s team for the second time in three years. The 35-point loss at WVU Coliseum in 2018 had been the Horns’ worst loss as a Big 12 school. But this debacle, where Texas lost its will to fight before halftime and lost by 38, tops it.

“We got our ass kicked, to sum it up,” UT guard Jase Febres said.

Febres and Matt Coleman III were the only Horns in double figures, but those numbers were padded in garbage time. It was so bad, the 12,592 West Virginia fans were going wild when the Mountaineers carried walk-on Spencer Macke off on their shoulders for his late 3-pointer.

“Just embarrassing. Sick. I don’t want to get into details, but it’s embarrassing,” Coleman said. “We just got out-worked, out-played, out-fought. Everything. just embarrassing. Just sick to see. I gotta take ownership on my end.”

The team’s record would indicate Texas (12-6, 2-4) is still having a decent season. But now two games below .500 in league play, the Horns are in serious danger of falling well below the standard needed to make the NCAA Tournament. That’s widely thought to be the minimum benchmark Smart must clear to stay put.

Smart has a 33-45 Big 12 record in five seasons, has never won a single NCAA Tournament game and not once has competed for a Big 12 title despite having suited up three future first-round draft picks. He’s 15-32 against Top 25 opponents. Smart has three years remaining on a contract with a guaranteed buyout north of $9 million.

That’s what made last Saturday’s loss to Kansas so hard to swallow, for the coach himself. That loss coupled with Monday night’s two days later feels like two anchors tied to the Horns’ feet. Texas must still play Texas Tech, TCU and Iowa State twice, Baylor again and go to Lawrence, Kan. and Norman, Okla.

“They were just flat-out the more aggressive team,” said Smart, who came into Monday with a 2-2 record in Morgantown with UT. “Obviously, I gotta do a better job having our guys ready to stand up to them in a game like tonight. Regardless of where the game is or the opponent, from our side, that starts with us.”

West Virginia had plenty of motivation. Coach Bob Huggins’ group lost by 16 last Saturday at Kansas State. “It’s not Shaka. Shaka’s a good coach. It’s not that,” Huggins said. “We made shots, and we’re coming off being embarrassed.”

This was far and away the ugliest loss in Smart’s five seasons.

The visitors had only 20 points in the first half along with 16 fouls and 12 turnovers. At least it was a balanced scoring effort in the first half from Texas’ starters: Courtney Ramey (four points) Coleman (three), Febres (three), Kamaka Hepa (three) and Jericho Sims (two).

The Horns scored only three field goals in the final 12:39 before the break and went into the locker room on the wrong end of a 30-7 run. WVU led by 25, and it was essentially over.

What’s interesting is that when Febres hit a 3-pointer with 12:39 left, it was still a two-point game. Nothing wrong there. But Coleman got called for a charge, Royce Hamm Jr. was called for a foul and Gerald Liddell traveled.

“Everything just started to snowball, and you could see us lose our fight,” Coleman said. “We weren’t able to respond when things got a little rough. They took off.”

At one point, ESPN cameras caught freshman Kai Jones getting heated with teammates during a timeout. “I actually told him, ‘I like your emotion.’ We need more of that on the floor,” Smart said. “I told him to go after the ball with the same emotion.”

Smart wants his players to hold each other accountable. Febres admitted that Coleman called him out at one point for a blank stare.

“Me and him, I said, ‘I got you.’ And that I would step it up,’” Febres said. “At the end of the day, you just have to fight and we didn’t do that. It doesn’t matter if Matt and I had high scoring games. We got our ass kicked.”

Four Mountaineers finished in double figures and dominated the stat sheet. But the final totals didn’t really matter. This was a game-changer in terms of perception.

Even the school’s best player not named Kevin Durant blasted away on Twitter.

It’s very disappointing and disheartening to watch the direction Texas Longhorn has now taken. I’ve never witnessed a blowout of this magnitude in BIG12 play like tonight.

Texas has the rest of the week to prepare for Saturday’s home game against LSU as part of the Big 12/SEC Challenge. Then it’s back to conference play all through early March.

If the Horns can’t pick it up, it’ll be a long, painful grind to the Big 12 tournament in Kansas City. As Smart walked back to the locker room, he slapped his hand against the wall in total frustration.

“It’s all about your pride,” Coleman said. “Who are you as an individual and who are we as a team? How are we going to respond to this?

“This should be a turning point,” he added. “We came to Texas to play basketball, to play in the Big 12, play at the highest level. If that’s what we care about, no words need to be said.”