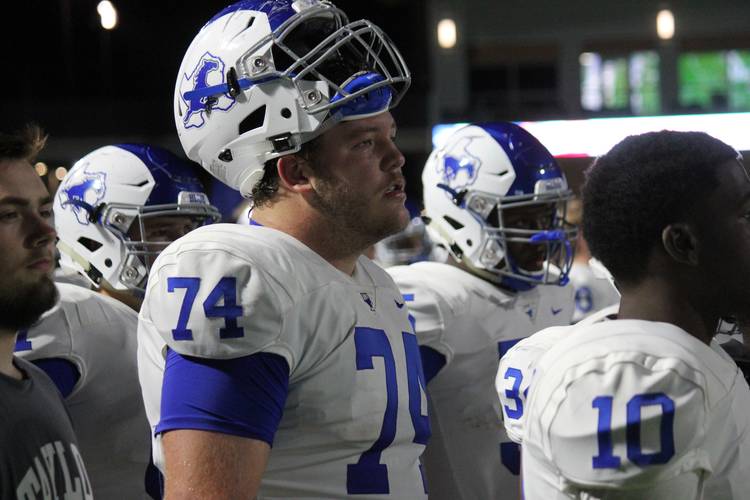 If recruiting is truly about relationships, Texas hopes four-star guard Bryce Foster follows his closest football friends to Austin. The Katy Taylor product grew up playing youth football with 2021 UT commits Jalen Milroe and Hayden Conner. Foster and Conner remain teammates at Taylor, while Milroe quarterbacks at nearby Katy Tompkins. The trio was in Austin for Texas’ first junior day of the year.

“I try to build relationships,” Foster said. “Coach (Herb) Hand is one of my favorite coaches. We’re almost friends. I’ve known him since eighth grade. Hayden and Jalen stay in my ear and throw some facts my way. It’s fun messing with them about it.”

Conner, a four-star offensive tackle, makes it no secret that he wants his friend and teammate to join the turnaround in Austin.

“It’s family. He has played with Jalen and I forever and we won a national championship together as kids, and eventually he’s going to know this is home,” Conner said. “Bryce and I have gone on a bunch of different trips together. It’s getting into crunch time, so I’m really in his ear. I talked him into coming this weekend and he enjoyed it.”

Milroe knows a talented offensive line is how he leads Texas back to national prominence. “I’m working on Bryce Foster because I want monsters in front of me,” he said.

Foster is the second-ranked guard in the 2021 class. He’s a national top-100 prospect with offers from nearly every major program in the country. The 6-4, 340-pound mauler wants to take his five official visits before picking a school. He mentioned Oklahoma, Texas A&M and Texas as programs likely to receive a visit. A determining factor for Foster is track and field; he’s a high-level shot put and discus thrower with Olympic aspirations.

“The same year I can get drafted to the NFL is the same summer of the 2024 Olympics. That’s my crazy dream,” Foster said. “Texas’ coaching staff is on board to let me throw. It’s a main part of my decision. Texas said they have a couple of guys who always do track, so they’ve gone through that process before.”

Conner, a four-star offensive tackle, was on campus for the first time since Texas hired new offensive coordinator Mike Yurchich. Hand was one of a few assistants retained after the season, easing the transition for players like Conner.

“It felt normal. It was great to meet the new coaches. It feels like they’re meant to be here,” Conner said. “If there was a coaching change at offensive line, I still wouldn’t have de-committed, but it is perfect to still have coach (Herb) Hand around. Coach Hand makes my job a lot easier.”

Conner is one of seven 2021 prospects committed to Texas. He’s the only offensive linemen of the bunch. The Longhorns haven’t lost a commitment from the 2021 cycle outside of Quay Davis, but that wasn’t a result of on-field play or staff changes. Keeping the talented group in tact is a testament to Tom Herman and the Texas brand.

“We know that the future of Texas is bright. We know that it is going to change and we’re going to be the ones to change it,” Conner said. “That’s keeping us motivated to stay here.”

Conner and Foster know about turnarounds on the football field. Taylor limped into the playoffs as a fourth-place team in district only to reach the state semifinals and claim a Region III championship in Class 6A Division II.

“It’s easy to sit in the stands and say this and that, but football is complex and winning is a process. I think that’s why players can stay committed despite a struggle last year,” Conner said. “We know how hard it is to win.”

Texas 85, Kansas 77: With room to improve, the Longhorns join an elite group of winners