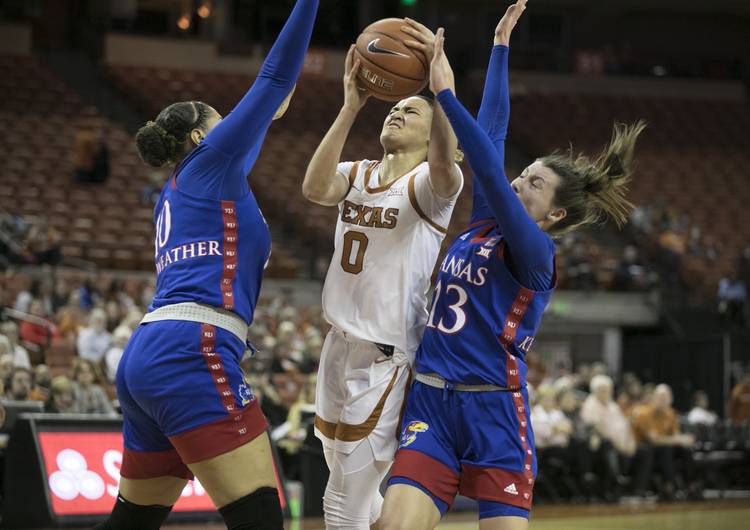 Texas extended its winning streak to three games Wednesday night with an 85-77 victory over Kansas.

It was the 1,100th win in program history. Only five other schools have won that many.

So move over, Tennessee. Make room, UConn. Let the Club 1100 bouncer know that Texas has also joined James Madison, Louisiana Tech and Stanford on the list.

Added sophomore forward Charli Collier: “Knowing the amount of work it takes to make 1,100 wins, like, no one does that. That’s amazing. Just got to add on to that.”

Twenty-nine of those 1,100 wins have come at the expense of Kansas. This was Texas’ 15th straight win in the series, though the Jayhawks did jump out to an early lead behind Aniya Thomas’ 10 points.

Texas (12-6, 4-2 Big 12) rebounded in the second quarter and turned a 23-19 deficit into a 37-32 halftime lead. In the second session, the Longhorns split 18 points between six players as senior guard Lashann Higgs sat with foul troubles.

Kansas coach Brandon Schneider noted that “the biggest difference in terms of runs was their start to the third quarter.” Over the first 97 seconds of the second half, Sutton registered two assists and scored off a pass from Joyner Holmes. That 6-0 run forced a timeout and Texas went on to score a 26-18 advantage in the quarter.

Sutton joined Holmes, Collier and Higgs as UT’s double-digit scorers. Holmes led the way with 22 points while Sutton (18), Collier (17) and Higgs (10) accounted for 53% of UT’s scoring. With 15 and 11 rebounds, Collier and Holmes also recorded their 11th and 10th double-doubles of the season.

After the eight-point win wrapped up, Texas coach Karen Aston had a laundry list of shortcomings to go over with her team. She credited Kansas but was displeased with UT’s defensive efficiency, slow start and inability to put the Jayhawks away in the fourth quarter. Texas committed 21 turnovers and Aston added that “this was the first game I think in probably three or four games that I did not think our bench played well.”

Down by as many as 15 points in the final frame, Kansas pulled to within six with 1:42 remaining and made it an 80-75 game with 41.5 seconds left. Free throws and a key steal by Sutton helped Texas fend off the Jayhawks, though. Thomas led KU with a career-high 21 points.

“We had multiple chances to get and stay within striking distance and don’t knock down our free throws,” Schneider said.

Notes: Sutton left the game in the waning seconds with a right knee sprain. She appeared in the post-game press conference and said, “I feel good. I’ll be fine, just get some rest and get ready for the next game.” … Wednesday’s game drew an announced crowd of 2,756. … Aston said the team’s performance may have been affected by the start of the semester and classes. “It’s our first week back in school and we experienced kind of the same mental lull last year when we started classes,” she said. “Maybe that was a little bit of our lack of focus today.” … After fouling out four players in its first 16 games, Kansas lost two players on Wednesday. … Texas plays at Oklahoma State (12-6, 3-3) on Saturday.