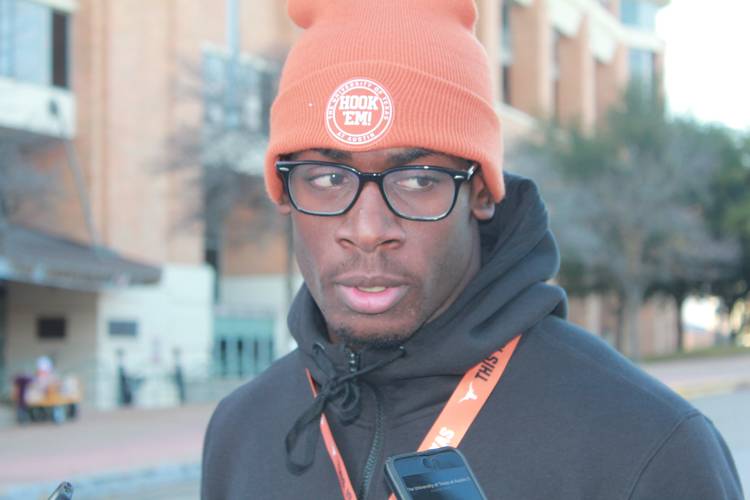 Programs count on commitments to help with recruiting. New Caney outside linebacker Derrick Harris Jr. did his part last Saturday at Texas’ junior day. The four-star was among six commitments from the 2021 class on campus. He spent his time meeting the new assistant coaches and working on fellow recruits.

“Today was great. I got to talk to commits and guys I’m hoping to commit like Terrence Cooks and LJ Johnson,” Harris said. “It’s important to build those bonds. We were all talking about enrolling early and what we can do as a class when we get to Austin. We want it to feel like one big family, from the players to the coaches.”

Texas hasn’t lost a commitment from the 2021 class since the end of the season despite going 8-5 and making multiple staff changes on both sides of the ball. Harris’ reasoning was simple.

“It’s Texas. Who doesn’t want to come to Texas?” he asked. “Coach (Tom) Herman would text me nearly every day in the season and tell me that everything would be OK and to stick to the script. It’s up to the players to help Texas get back.”

Harris is a 6-2, 215-pound prospect from north Houston. He’s the 12th-ranked outside linebacker in the entire class and a national top-200 prospect, per 247Sports’ composite rankings. He’s a two-time all-district honoree. He was the District 9-5A Division I newcomer of the year as a sophomore and its defensive MVP as a junior.

“I’ve improved my pass rush,” he said. “I might be a linebacker or defensive end in the new scheme. I work on my footwork as much as possible. Coach (Chris) Ash was family-oriented and enthusiastic. It felt good to get to know him.”

Cooks was impressed by Harris. The two hadn’t previously met.

“I rock with Derrick. We know a lot of the same guys,” Cooks said. “He’s a cool dude and I plan on taking my official to Austin whenever he takes his official visit.”

Cooks is a 6-2, 210-pound prospect from Alvin Shadow Creek. He helped the Sharks win the Class 5A Division I state championship in the program’s second varsity year. It was Cooks’ first visit to Texas.

“I wasn’t that familiar with the Texas program coming into the trip, but I’d say Texas is now a top school, if not the top school for me,” Cooks said. “Texas has a sense of program and family I buy into a lot. I think this team is going in the right direction.”

Cooks was told last weekend that he’s Texas’ top priority at Will linebacker. He recorded 72 tackles forced three fumbles in his first year as a varsity starter. He was a relative unknown before his junior season.

“I thought it would be weird because I wasn’t going to know anybody on the visit and I’m shy, but it was great,” he said. “I met some cool people and everyone treated me great. We are all here for the same reason. It was a welcoming environment.”

“Jalen was in my ear. He’s a leader on and off the field,” Cooks said. “He’s an intelligent person and is one of the hardest working guys I know. He’s a nice, caring dude.”

Another relationship Texas will lean on in Cook’s recruitment is the one between the young linebacker and his former teammate, Xavion Alford. Alford signed with Texas in December and is already enrolled in Austin.

“Xavion is my boy and is in my ear. He’s like my family and I can trust him,” Cooks said. “He’ll play a factor in my school.”

Texas 85, Kansas 77: With room to improve, the Longhorns join an elite group of winners