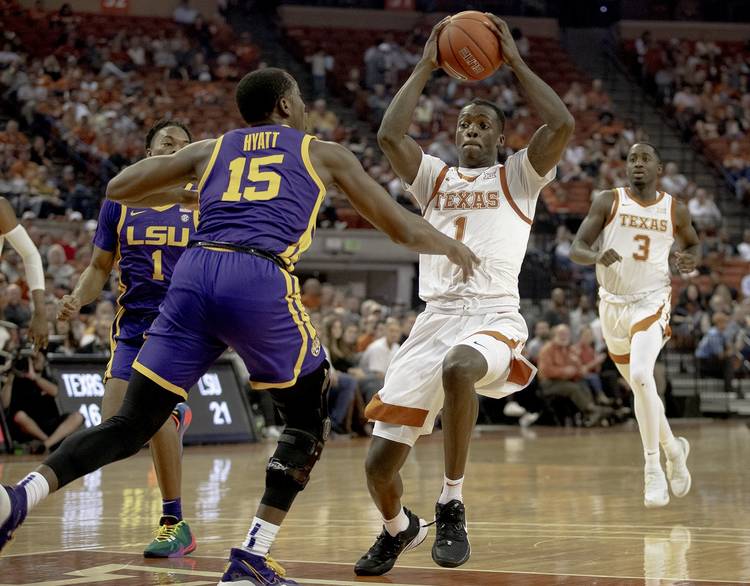 The halftime baby race generated more fan excitement than anything Texas did Saturday at the Erwin Center.

The announced crowd of 11,287 was enraptured by two toddlers crawling across the floor. There was a similar roar when the home team crawled out of a 16-point hole, too.

There was mild intrigue when Texas unveiled a full-court press that generated two LSU turnovers. It raised eyebrows when a half-court trap sparked another turnover. The locals were on their feet with less than eight minutes left after the Tigers air-balled a 3-pointer. Something was brewing.

“I figured they were going to press,” LSU coach Will Wade said. “If you watched us this year, that’s one way to get to us.”

But the crowd simply didn’t know what to do the final four minutes. Neither did the Longhorns. LSU changed its defensive look and pulled away late for a 69-67 win in the Big 12/SEC Challenge.

The Longhorns (12-7, 2-4 Big 12) scored only seven points in the final 4:16 — and five of those were uncontested. What could’ve been a sizzling come-from-behind victory was nothing more than a close-as-always, not-close-enough loss like the others that have bedeviled the UT program for years.

“The bottom line is in the second half, there was a long stretch where our guys lost themselves in the fight,” Texas coach Shaka Smart said. “Any of the other things that might’ve muddied their mind, that stuff was gone.”

The second half, if viewed as stand-alone film, had everything fans thought Smart’s program would always be. LSU got up by 16 on Javonte Smart’s layup with 15:08 remaining. Then with no advance warning, the Horns went into a full-court press and showed a half-court trap that looked promising.

It jump-started the Horns’ offense. Jericho Sims and Matt Coleman III both scored. Courtney Ramey scored in the lane as Texas went on a 12-2 run. Texas’ press appeared to create havoc, a style and mentality that felt oddly familiar. Hard to remember anymore, though.

“Yeah, it did, but it’s internal effort,” Andrew Jones said. “You can play any defense in the world. You can draw up any scheme. It’s about how hard we play. We just tried to flip the script, play harder, play more aggressive on the defensive end and get stops so we can play the way we want to.”

Jones had himself a Zion Williamson-like stretch that closed the gap even more. His tough 13-footer in the lane was impressive, as was the following driving layup. When Jones banked in a 3-pointer, Texas was back within one.

Then, a breakthrough. Coleman’s 3-pointer from the left wing finally gave the Horns a 58-56 lead with 4:52 remaining.

“Disappointing, but we dug ourselves in that hole, so there’s nobody to be mad at but ourselves,” Coleman said. “It’s a 40-minute game. So we have to get up for 40 minutes.”

Texas missed 4 of 5 shots in the closing minutes and got behind by five. UT’s last two buckets in the final four seconds — Coleman’s easy layup and 3-pointer — weren’t even challenged by the defense.

“We were the aggressors for that stretch before the changed defenses,” Jones said. “We just didn’t put it all together at the end.”

The Tigers shot 55.2% overall and needed only five made 3-pointers. The Horns shot 46.7% and once again just let it fly from long range, oftentimes blindfolded with a cigarette. Texas was 8-for-26 from downtown. Jones had a team-high 20 points, Coleman had 17, and Jericho Sims added 14.

The injury news wasn’t any better afterward. Smart said forward Gerald Liddell (back) will need rest before he can begin his rehabilitation, meaning he’ll be out indefinitely. Starting forward Kamaka Hepa will be out at least two weeks with his mild high ankle sprain.

The Horns are now down two big men, are two games below .500 in the Big 12 standings and have a fan base down to its last flicker of hope.

Having now lost three straight, it’s clear Smart needs to do something. So why not use more full-court press? It’s something Texas fans thought he would do upon arrival from Virginia Commonwealth.

Smart believed five-star recruits — such as McDonald’s All-American Greg Brown III, who was in attendance — don’t like to press, so he stopped doing it. And it was being used against Texas by opposing coaches on the recruiting trail.

Maybe Smart will use that more when Big 12 play starts up again this week. Texas will play at TCU on Wednesday and then host Iowa State next Saturday.

“We definitely have to find a way to spur that aggressiveness, that attacking mindset,” Smart said. “If you do it all out, you can create a lot of good plays, but you have to sell out to it as five guys on the floor.”

Havoc feels like a style someone should trademark. Maybe Smart could make that Texas’ brand someday. Now seems like a good time to start.