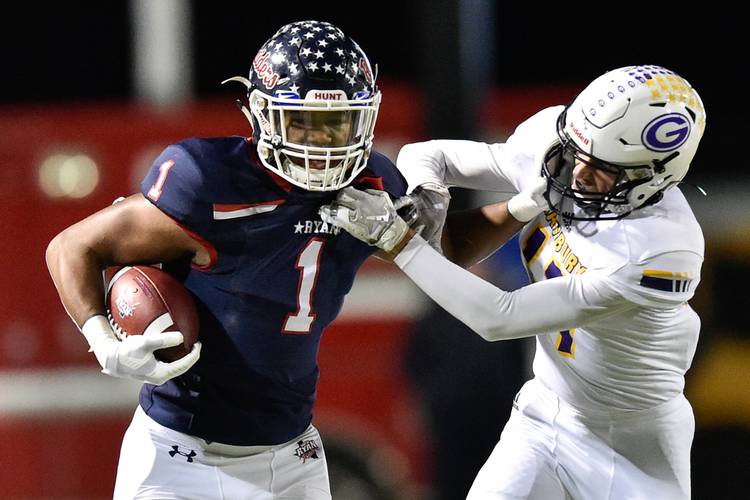 Two future Longhorns were in town last weekend to take in a Texas basketball game and meet the new assistant coaches hired by Tom Herman. Denton Ryan’s Ja’Tavion Sanders and Everman’s Juan Davis made the trip from the Dallas-Fort Worth area  along with dozens of top targets and fellow pledges from the 2021 class. The duo is part of Texas’ seven-man class that ranks fourth in the nation right now and first in the Big 12.

Sanders stars on offense and defense for a state championship contender. The 6-3, 220-pound four-star is the highest-rated UT pledge so far for 2021, ranking 46th nationally on the 247Sports composite ratings. He’ll likely wind up in the top five of the  Fabulous 55, which will be published the day after national signing day on Feb. 5.

“It was amazing. I’m glad my mom got to see the facility and meet coach Herman,” Sanders said. “He’s a great guy who is going to get me right for my future.”

Sanders and fellow Texas commit Billy Bowman Jr. helped Denton Ryan reach the Class 5A Division I state championship game. They lost in the final seconds to Alvin Shadow Creek, but the two recruits are determined to win a state title before departing for Austin. Sanders is undecided about which position he’ll play in college. He’s an all-district performer at defensive end and wide receiver.

“I’m an athlete. I don’t have a position because I’ve been playing wide receiver and defensive end my whole life,” he said. “Coach (Chris) Ash says he likes the way I would fit on the edge in the new defense. I’d be primarily rushing the passer, but I haven’t decided if I’m playing offense or defense. Coach Herman said I can decide that once I’m on campus.”

Sanders is the fourth-ranked athlete in the entire class and a borderline five-star prospect. He chose Texas on Sept. 8 over Alabama and 22 other offers. He arrived on the scene during his sophomore season as a two-way starter who recorded 23 tackles for loss and 9.5 sacks, as well as 23 catches for 378 yards and five touchdowns. He said his commitment is solid despite the coaching changes and lackluster 2019.

“Texas is where we want to be and there’s not another place I’d rather be,”  Sanders said.

Davis shared a similar sentiment. The three-star tight end picked Texas in July over Baylor. The quiet athlete can also play wide receiver because of his athleticism. He caught 41 passes for 499 yards and seven touchdowns as a sophomore. He moved to quarterback as a junior at Everman, playing out of position for a program that reached the first round of the state playoffs. Davis also competes in track, specializing in the 200-meter dash and triple jump.

“I’m still firm and not hearing from a ton of schools,” Davis said. “Texas showed me a lot of love and they made me feel at home.”

“Coach Boulware was excited to see me and said he heard some great things about me,” Davis said. “I had a fun time meeting the other players. We talk on a group chat on Twitter. We’re always bouncing stuff off each other.”