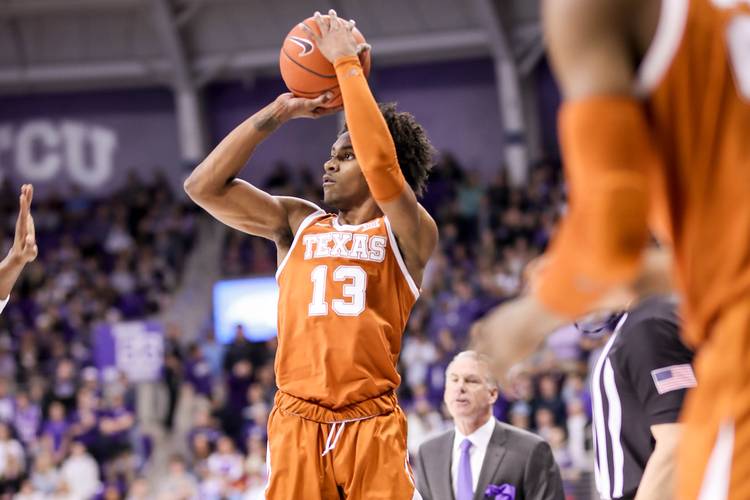 FORT WORTH — For once, you could see it written all over the opposing players’ faces.

What!? We lost to Texas?

TCU senior Desmond Bane said he wasn’t sure “if it was us not taking them serious enough.” But here in what his coach Jamie Dixon calls the dog days of the basketball season, anything is possible.

That’s how the Frogs felt Wednesday after the Longhorns escaped Schollmaier Arena with a much-needed 62-61 win. Texas (13-7, 3-4 Big 12) snapped a three-game losing skid by hitting 11 3-pointers, several in the last second of the shot clock, and held tight during a late TCU rally.

“Bad start. Poor defense early. Not a very good job,” Dixon said, looking rather shell-shocked, too. “I thought their press, we didn’t handle that very good. Surprised by that.”

UT coach Shaka Smart looked relieved. He wanted his players to “own the challenge ahead of you.” The Horns’ last road trip just over a week ago was a total disaster. That 38-point road loss at West Virginia is now in the rearview mirror, and so is the month of January.

Texas’ next game comes Saturday at home against Iowa State, another team scuffling along trying to shake the winter blues. Starting February with a home win would get the Horns back to .500 in league play.

“Mostly I’m happy for our guys,” Smart said. “Definitely, there was some excitement in the locker room. Our guys put a lot of time in, so it’s good to see them rewarded.”

Texas had a 59-51 lead. But Bane hit two free throws, Francisco Farabello drained a 3-pointer and RJ Nembhard tied it up with one of his own. Texas’ eight-point lead was gone in about two minutes.

On the next possession, the Horns passed it around as nobody looked like they wanted the shot. You take it. No, you take it. Please, you first. Finally, Andrew Jones whipped it to Febres at the top of the key, and the 6-5 guard had no choice. It swished true, putting Texas up 62-59.

“They went on a run where they hit a couple of shots before then,” Febres said. “Being able to answer them back, shut the crowd up. Felt good.”

TCU worked to get one final possession with six seconds left. But Nembhard was called for traveling and the Horns took over. The 2019 NIT champions held on to beat the 2017 NIT champions.

The Frogs weren’t as upset about Febres’ final 3-pointer as they were about all those that came before. Febres finished with a team-high 15 points, his second-highest since Big 12 play began.

“We gave him confidence early and that’s what happens,” Bane said. “It’s the end of the clock, so he had nothing to lose.”

Courtney Ramey’s trip to Cowtown was an adventure. He finished with 12 points, made a NBA-range 3-pointer plus a circus shot that gave Texas the eight-point lead. But he also threw another ball into the stands for a turnover, something that’s becoming somewhat of a habit.

Jericho Sims had nine points and 13 rebounds, but he’ll lament all the easy buckets that TCU’s Kevin Samuel got inside. Samuel held his space in the paint and called for the ball on defensive switches, getting better mismatches against UT’s guards. He finished with 17 points on 8-of-11 shooting.

Texas also got quality minutes out of freshman Donovan Williams, who had five points, three rebounds and three assists. Royce Hamm Jr. had four rebounds, two big ones, and went 4 for 4 at the free throw line.

“He’s going to continue to get opportunity as he seizes it,” Smart said of Hamm. “I thought his whole approach was really good tonight. In the locker room after the game, he was probably as excited as anybody because he contributed to winning.”

Winning or losing these close games — against what’s perceived as equal or lesser competition — shape how a team views itself. That’s what made TCU’s post-game reaction all the more interesting.

This was a game the Frogs will be grousing about for days.

“We tend to have ups and downs within our team emotionally, physically, we’ve got to find a way to sustain it,” Bane said. “You’re going to see a lot of teams, players get injured, players get kicked off the team, the team starts splintering apart. We’re kind of in that time of the year where it’s tough.”

It sure energized the Longhorns, though. Whether they can build on it is the great unknown.

“This is a big-time road win,” Ramey said.