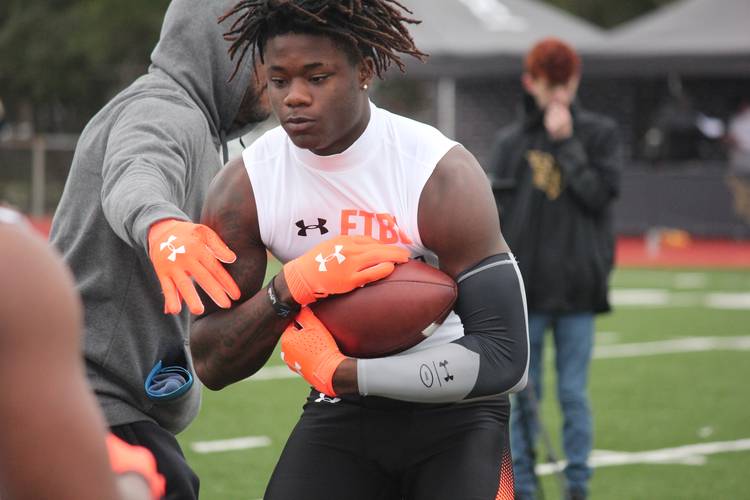 Six members of the Fabulous 55 remain uncommitted entering the final weekend before national signing day next Wednesday. Three of those players are priority targets for Texas. As is Galena Park North Shore running back Zachary Evans, the top-rated player in the state:

The Evans saga should come to a close Wednesday when he picks a school for the second time. Evans signed with Georgia back in December during the early signing period, but then the Bulldogs backed away because of concerns over maturity issues with Evans, who was suspended for the Class 6A Division I state title game for violating team rules.

There is no denying Evans’ talent. He’s a graceful runner with incredible balance and speed. He’ll be an instant contributor at the college level if he remains focused and eligible. Texas A&M appears to be the leader, but he recently took an official to Tennessee and also picked up an offer from Lane Kiffin at Ole Miss.

Texas fans are on edge waiting for Collins to pick a school on Wednesday. He recently earned five-star status from 247Sports, but he remains a four-star on its composite rankings. Collins possesses a rare combination of size and athleticism. The former basketball player was late to football and is still figuring out the finer points of defensive line technique. His upside is as high as any other defensive lineman in the 2020 cycle. The Longhorns feel good about their chances.

Hornsby seemed destined to sign with Baylor before Bears coach Matt Rhule left for the NFL. Arkansas has emerged as the leader for the ultra-athletic quarterback. He’s also taken official visits to Texas A&M and Purdue but also will take one to Baylor on this final weekend.

Hornsby led Fort Bend Marshall to consecutive appearances in the Class 5A Division II state championship game. He threw for 52 touchdowns against only four interceptions  during his two-year varsity career. He added 2,340 yards and 31 touchdowns as a rusher.

The one-time UT commit is starting to lean back toward the Longhorns with the hiring of defensive coordinator Chris Ash and Ash’s preference to run a four-man front. Umanmielen didn’t want to play inside for a three-man front, so he de-committed from the Longhorns in October. He’s now back in the fold and is expected at Texas for an official visit this weekend.

Texas would love to close the cycle with the addition of local defensive linemen Umanmielen and Collins to pair with December signees Vernon Broughton and Sawyer Goram-Welch. Baylor was the leader for Umanmielen before Rhule left for the Carolina Panthers. Umanmielen recorded 27 tackles for loss and 10 sacks as a senior.

Texas needs to add at least one more receiver after losing Temple four-star Quentin Johnston to TCU the week of the early signing period. Dixon is a slot receiver who produced for a state championship squad. He caught 157 catches for 2,511 yards and 37 touchdowns during his final two seasons and helped the Bulldogs win the Class 4A Division I title last fall. Dixon is also accomplished in the triple jump and in the 100-meters. He’s the younger brother of UT running back Keaontay Ingram.

Crawford might be destined for a junior college. The former Arkansas pledge didn’t sign in the early period and hasn’t taken any official visits in January. That’s usually a sign that the JUCO route is likely.