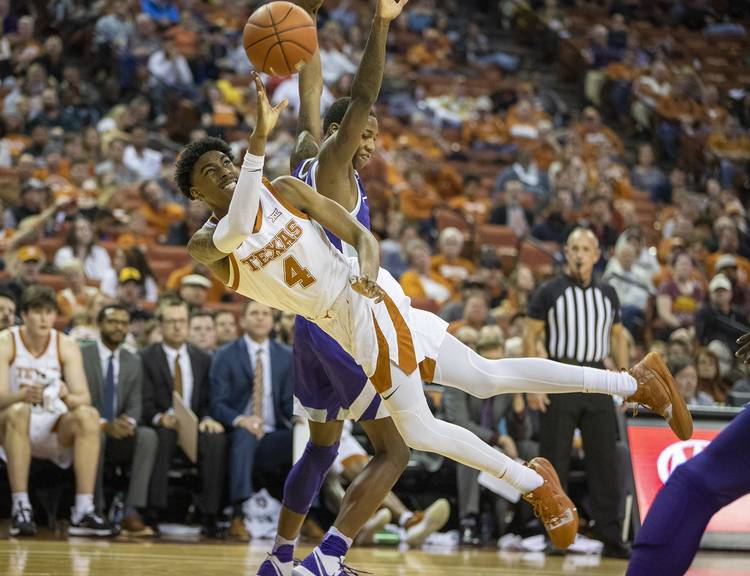 If Donovan Williams made the decisions, Texas would go up-tempo for the rest of the season starting Saturday against Iowa State.

“That’s fun to me. That’s how I grew up playing,” Williams said Friday.

“That’s really when I have the best opportunity to showcase my abilities,” he added. “I’m not the strongest guy on he court, not the fastest, but I do have a lot of length and a lot of abilities that can aid that full-court press.”

Ditto for Kai Jones, another freshman.

“I think it’s been working really well,” Jones said. “We did a good job of it against TCU, and hopefully we’ll get into some of that against Iowa State.”

Texas coach Shaka Smart wants a player-driven team. The upperclassmen may have a different view, but at least these two newcomers are eager to try more full-court press and half-court traps going forward.

The Longhorns (13-7, 3-4 Big 12) have two big chances over the next three days. First comes struggling Iowa State (9-11, 2-5) as UT can get back to .500 in league play. That would be a major momentum boost before heading off to face No. 3 Kansas at Allen Fieldhouse on Monday.

Just playing .500 basketball in league play may not sound impressive. But that’s a major benchmark for the NCAA Tournament selection committee. Texas likely doesn’t have a shot at the field of 68 with an 8-10 finish or worse. The Horns’ weak non-conference schedule won’t win them any goodwill with the committee, either.

“Every game is about us, just the way that we play in terms of our spacing and talking on defense,” Jones said. “We’ve got to go into both of those games with an aggressive mindset and try to take those wins.”

The last seven days had to be eye-opening for the Horns and the coaching staff. The full-court press worked. Texas generated three turnovers against LSU and converted those into points, but the Tigers held on for a two-point win. Then on Wednesday, Texas used some variation of the press on seven possessions, Jones said.

The Horns — the ones with young legs, anyway — want to do it even more.

“With us, we really try to go off the coaches’ game plan, but when we find something as players that work, we definitely try to stick with it,” Williams said. “It’s obvious in games we have little lulls offensively. So we just try whatever we can to get out of that little slump.”

Williams and Jones have both seen their opportunities grow with injuries to Gerald Liddell (back) and Kamaka Hepa (ankle). Liddell is expected to be out an extended time; Hepa could miss another full week.

Williams had six points, three steals and one block in 13 minutes against LSU. He hit a 3-pointer and had one steal in 10 minutes against TCU. Jones tallied four points and six rebounds in those two games. Prior to that, Jones had eight blocks in the previous three games.

“I’m a really aggressive player by nature, and I like pressing,” Jones said. “I like playing real fast, up-tempo basketball. I’m really big on that and just try to make my presence felt in the game by any means.”

Both players have gone through growing pains just learning how to play at the collegiate level. Williams has been careless with the ball at times. Jones has drawn too many offensive fouls for lowing his shoulder while driving to the basket.

But those are all mistakes corrected through time and experience. By all indications, these are two cornerstone players for Texas’ future.

“For Kai and I, we just play off our natural instincts,” Williams said. “You can be taught the basics and the fundamentals of what to do, what not to do. But when it comes to the flow of the game, you’ve really just got to be in there and feel it.”

The Dotted Line: Six members of the Fabulous 55 remain uncommitted