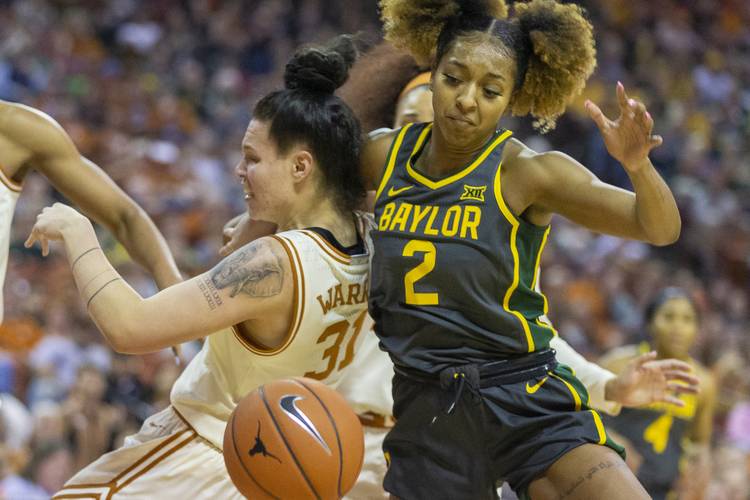 Over the course of the first 20 games of its basketball season, Texas had outscored its opponents 377-319 in its third quarters.

Still, UT head coach Karen Aston had at times been irritated by her team’s post-halftime performances. Following a loss to TCU in early January, Aston even remarked that “the third quarter has not been our best quarter probably in every game we’ve played and it was really a problem tonight.”

Twenty-eight days later, those third-quarter troubles once again haunted Texas in a 64-44 setback against No. 2 Baylor. The 20-point loss was UT’s 21st in its last 22 games against Baylor. The loss also snapped a season-best five-game winning streak for the Longhorns (14-7, 6-3 Big 12).

“I thought Baylor punched us in the third quarter and we didn’t respond very well at all,” Aston said. “I just thought we got really passive and just didn’t take the punch very well.”

Texas missed its first six shots on Friday and the Longhorns mustered only a 27.3 shooting percentage in the first half. Still, a Baylor team that missed 19 shots only led by five points at the intermission. That lead would more than quadruple by the end of the third quarter.

Baylor turned its first two possessions of the second half into points. On its third trip down the floor, Queen Egbo was fouled while scoring. Egbo missed her free throw but Lauren Cox grabbed the offensive rebound and the eventual three-pointer from Te’a Cooper gave Baylor a 38-26 advantage.

Two minutes and 37 seconds into the second half, Texas was forced to use a timeout. But things would not get any better for the Longhorns. Baylor outscored Texas 23-5 in the third quarter and was up by 23 points by the session’s buzzer.

Baylor coach Kim Mulkey told reporters that she didn’t give a fiery speech at halftime. DiDi Richards confirmed Mulkey’s story — “I think y’all are expecting a fiery halftime speech,” the junior guard said — but noted that a poor shooting performance was highlighted. Baylor shot 69.2% in the third quarter but Richards thought it was the Lady Bears’ defense that led to its surge.

“I think our team thrives when we’re playing our best defense,” Richards said. “I think when we play good defense, that’s when our team starts going.”

Only three Lady Bears scored in the third quarter although Egbo (eight points), Richards (eight) and Cooper (seven) each tallied more points than the Longhorns. Texas missed 14 shots — six of which were 3-pointers — and two free throws in the quarter. The Longhorns also turned over the basketball twice.

“I called the timeout and thought we would respond to that and we just didn’t respond at all. We did not respond in the third quarter,” Aston said. “I thought we tried to keep competing in the fourth but it’s a four-quarter game and we didn’t play in the third at all.”

Added senior guard Lashann Higgs said: “Like Coach said, third quarter kind of killed us. They found their mismatches so I think that was a little bit of it right there.”

For the game, Higgs led Texas with 10 points off the bench. UT’s five starters scored 25 points and shot a combined 10-for-48 from the field. Texas also missed 12 free throws.

“We took a lot of one-on-one shots in the beginning, which really hurt us,” said sophomore forward Charli Collier, whose team had only three assists. “We didn’t really play as a team as how we know how to play and that really hurt us. we just weren’t a team tonight and it showed.”

With the evisceration at the Erwin Center, Baylor extended its winning streak in Big 12 play to 49 games. Since it was beaten by Texas in Waco in 2017, Baylor has won each of its regular-season conference meetings by an average of 25.3 points. Only one of those games has been a one-score decision.

Notes: Collier grabbed 16 rebounds but was limited offensively to just a first-quarter 3-pointer. … Sophomore Joanne Allen-Taylor was responsible for three of UT’s five 3-pointers. … Texas is off until a trip to Texas Tech on Feb. 9. … An announced crowd of 6,456 was the second-best showing at the Erwin Center this season.