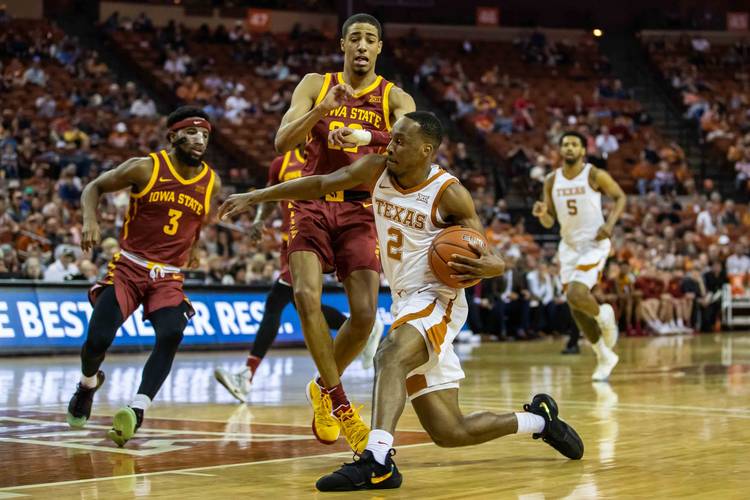 Tyrese Haliburton figured he’s been playing against Courtney Ramey since the third grade. Their basketball lives have crisscrossed through the years and intersected again Saturday.

Haliburton is now the Iowa State standout from Wisconsin some are projecting as a first-round NBA pick this summer. Ramey is the up-and-down Texas guard from St. Louis capable of tossing in 3-pointers as easily as throwing it into the stands.

“I’ve known him my whole life,” Haliburton said. “I know exactly what he’s capable of.”

So it was no surprise to Haliburton to see Ramey bury a 3-pointer from the top of the key to get Texas within two. And then Ramey hit another one that gave the Horns a one-point lead with 1:06 remaining.

Ramey’s two clutch shots, along with Kai Jones’ and Matt Coleman III’s late free throws, helped Texas seal a 72-68 win at the Erwin Center. It capped a week in which the Longhorns (14-7, 4-4) got back to .500 in Big 12 play and suddenly felt good again.

“I just think my teammates really just got to me and stayed in my ear, kept that confidence in me,” Ramey said.

He’d been on a seven-game stretch of scoring in double figures. Then he went 3-for-9 shooting against Kansas, 2-for-8 at West Virginia and 1-for-5 against LSU. He had 12 points Wednesday against TCU and hit a crazy circus shot late that helped UT win in Fort Worth.

This season will go nowhere if Ramey can’t reengage. This past week was a huge step forward.

“He’s a Division I basketball player,” Haliburton said of his longtime friend and basketball foe. “No matter how you’re playing in previous games, everyone’s capable of doing what he did.”

Texas coach Shaka Smart noted that Ramey is incredibly hard on himself. “This isn’t the first game where in the second half, he’s just been able to put whatever it is aside that was troubling him earlier in the game and do what he needed to do,” Smart said. “We wouldn’t have won the game without it.”

Ramey, Coleman and Jericho Sims all tallied 14 points against the Cyclones (9-12, 2-6). But none of them has the can’t-stop-me-now confidence of freshman Donovan Williams.

Texas’ eager 6-foot-6 swingman was clapping and calling for the ball on a fast break. He missed that particular 3-point attempt, but Williams kept coming. He finished with 13 points on 4-of-9 shooting and had four rebounds.

“He played 23 minutes,” Ramey said, “and I think he should’ve played more.”

Like Ramey, Williams just has to get out of his own head. This was easily Williams’ best game at Texas.

Texas fell behind by eight with 13:24 remaining. When Sims got a put-back bucket with 11:40 left, the Horns were back within five. It was obvious Sims needed more touches, more shots, more everything on the offensive end.

If his back-to-back opening dunks didn’t highlight a mismatch inside, what would? “That’s what he does,” Coleman said. “It’s God’s gift. God put a little extra sugar in his making.”

But Sims would get only one shot attempt the final 11:40. And that was a dunk only from a swift feed from Kai Jones on the opposite block.

“We probably ran five or six actions to get him the ball,” said Smart, who commended Iowa State’s Solomon Young for his ball-denial defense.

Still, Smart lamented that his guards can’t be scared to throw it in there. “If he’s open for a split second, he’s got to have it,” the coach said.

Sims had nine rebounds and went 7-for-8 from the floor, which is still not enough shot attempts for the coaching staff. Then again, it’s easy to go over that in film study after watching Ramey hit two 3-pointers and seeing how Iowa State missed three times from point-blank range.

Granted, it was just one possession, but that was a killer moment for the visitors. Trailing by one, Iowa State’s Rasir Bolton missed a layup, got his own rebound, missed again, controlled the tip and missed a third time. “Saw the rim. Just missed it,” Bolton said.

Said Iowa State coach Steve Prohm: “The 3-point line is what got us at the end. But that is a gut punch, because you go up by one there and you still don’t have to foul.”

The Horns managed their way through a gut-check week only to find another one dead ahead. Texas will travel to face No. 3 Kansas on Monday and then host Texas Tech next Saturday. Two days after that, No. 1 Baylor will come down Interstate 35.

No rest for the weary. It’s an incredible three-game stretch that will shape the season.