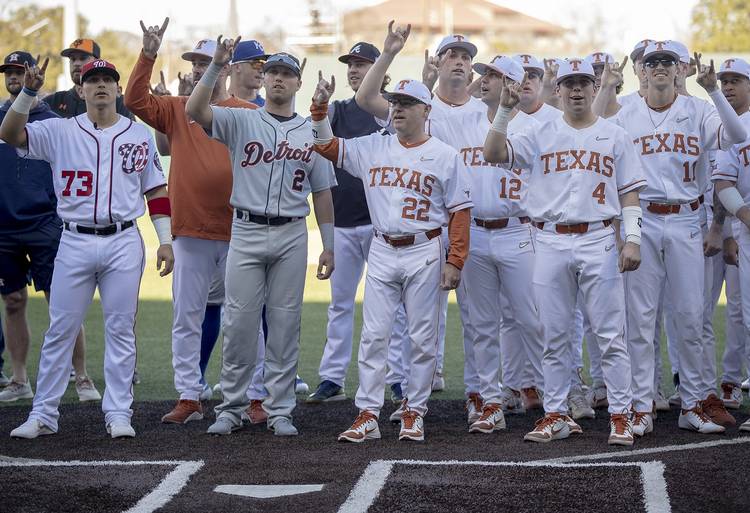 Texas players past and present sing "The Eyes of Texas" at the annual alumni game Saturday. [NICK WAGNER/AMERICAN-STATESMAN]

During the first inning at UFCU Disch-Falk Field on Saturday, Ryan Reynolds fielded a grounder near third base and fired the baseball across the diamond for an out.

It was a routine play that Texas’ fans had often seen over the past three seasons. This time, though, Reynolds was wearing a blue uniform. Now a member of the Chicago Cubs’ organization, Reynolds was a first-time alumnus participating in UT’s annual alumni game.

That means Reynolds won’t be at third base when UT opens its season at Rice on Feb. 14. If things go according to plan in spring training, Reynolds says his year might begin with the Cubs’ Single-A affiliate in South Bend, Ind.

But if Reynolds is playing baseball in Indiana, who will be starting at third base for Texas in less than two weeks? Before he was picked by the Cubs in the 14th round of last year’s draft, Reynolds made 85 straight starts for UT at third base. The Longhorns last started another player at the position on April 8, 2018.

“There’s always a next guy in line,” said Reynolds, who singled twice in the alumni game. “These guys prepare just as hard as well as we do. They’re fully prepared to take on that opportunity.”

Finding Texas’ next third baseman has already been cited as an area of concern for head coach David Pierce. Not helping matters is a left hand injury that will limit freshman Andre Duplantier II’s availability for the time being. Juniors Murphy Stehly and Sam Bertelson are additional options.

Stehly and Bertelson got the majority of the reps at third base during the Orange-White World Series in November. On Saturday, Texas started Stehly against its alumni. A newcomer from Orange Coast College, Stehly went without a hit in his two at-bats but was credited with a putout on defense.

“He’s played really well at short and at third base” in practices, Pierce said. “There’s days he’s going to swing the bat really well and then some days he’s going to just look overmatched. But at the same time, he competes really well, and I think he can do some small things playing the short game. He’s very solid. He’s a guy that you can depend on right now.”

Texas ended up on the losing end of Saturday’s seven-inning scrimmage against its alumni. The old-timers earned a 1-0 victory over the current crop of Longhorns. Nolan Kingham, a pitcher in Atlanta’s farm system, scored the only run on a sacrifice fly by former Texas teammate Kody Clemens.

Offensively, Texas was limited to three hits off the bats of Austin Todd and DJ Petrinsky. The alumni team did not pitch any professionals, so UT was shut down by a five-man rotation of freshmen Justin Eckhardt, Jared Southard, Will Swope and Sam Walbridge and sophomore Mason Bryant.

UT got four innings of three-hit baseball from sophomore right-hander Ty Madden, who could be a Saturday starter this spring. The nine pitchers who threw for the two teams Saturday combined for 15 strikeouts and nine walks.

“I think we’re heading in the right direction as a team,” Todd said. “We lost today, but you kind of have to look at it as we’re making adjustments to get ready for Feb. 14 because that’s when it matters.”

Pierce said the Longhorns will get into their regular-season routine Tuesday. Ahead of the season-opening trip to Rice, Pierce said he wants to refine the team’s pitching, get the young players ready for chaotic situations and slow down the batters’ approach at the plate.

“If we can accomplish those things, I think we can grow daily,” Pierce said.