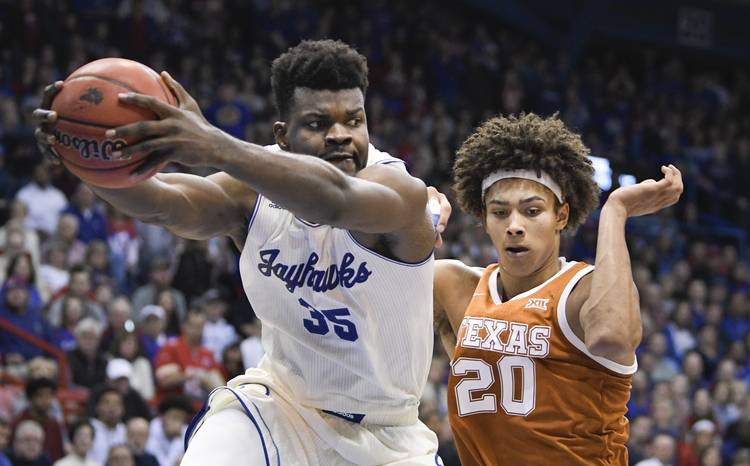 Kansas center Udoka Azubuike (35) pulls down a rebound in front of Texas forward Jericho Sims (20) during the second half of an NCAA college basketball game in Lawrence, Kan., Monday, Feb. 3, 2020. (AP Photo/Reed Hoffmann

They came wearing red baseball caps, toboggans, oversized jackets, golf shirts, shirts with the Lombardi Trophy and shirts with Travis Kelce’s now-everywhere phrase “You gotta fight for your right to party.” The Beastie Boys are getting paid for that, right?

Patrick Mahomes’ No. 15 jerseys were scattered throughout the building. During the national anthem, Jayhawks fans made it clear they lived in the Kingdom — the home of the “CHIEFS!!!”

Those same fans didn’t know what to do when Texas’ Jericho Sims opened with two terrific baskets. They were flat when Kai Jones grabbed seven quick rebounds. And they were a little stunned when Andrew Jones gave the Longhorns the halftime lead with a 3-pointer at the buzzer.

Oh, but the sold-out crowd of 16,300 regrouped in the second half, and so did their third-ranked Jayhawks. Devon Dotson led the charge and Texas wilted. The visitors ultimately fell behind by 17 and lost 69-58, same as they usually do in Lawrence.

Sims had 17 points and was 8-for-9 shooting and grabbed nine rebounds in a rather impressive individual performance. But Texas was 4-for-24 from 3-point range, and nobody outside of Sims and Matt Coleman III (20 points) could find offensive traction.

Courtney Ramey went 1-for-9 shooting. Jase Febres was 1-for-5. Donovan Williams was 3-for-9, but 0-for-3 from long range and missed twice on back-to-back possessions when the outcome was still in doubt.

“Extremely disappointed. If anyone comes in here and wins, it changes the course of your season,” UT coach Shaka Smart said. “Honestly, the way we played in the first half, I told the guys after the game they put us in position to go do that. But it’s a 40-minute game.”

It was also emblematic of this entire herky-jerky season. The first half was Texas’ best 20 minutes in weeks. Heck, maybe the whole season outside of the Purdue win.

Sims got two quick fouls early, but Will Baker and Royce Hamm Jr. held their own well enough against All-American Udoka Azubuike. Williams had a sizzling dish to Andrew Jones for a reverse layup, then went to the other end for an out-of-nowhere block.

Coleman’s 3-pointer with 6:42 remaining in the period was UT’s first of the night. The Horns were 0-for-8 from long range up to that point, but it was still a 19-19 game. Sims came back in and scored on back-to-back buckets over Azubuike. The Jayhawks had only four field goals in the last 7:08 before the break.

“I think we always matchup good with Kansas, or we have in the past,” Sims said. “We really put ourselves in good position coming out of halftime. They went on a few runs and we didn’t completely answer them back.”

The next 20 minutes, Texas reverted back to the mean. Azubuike opened by scoring on Sims as part of his 17-point night. Dotson hit a layup off a run-out, then he hit a 3-pointer from the left wing.

Texas didn’t get another bucket until after Smart called timeout with 14:03 remaining. Coleman came out of the huddle and hit a baseline jumper. Kai Jones nearly lost the ball multiple times before pushing it to Williams, who threw it up to Sims for a dunk. At that point, Texas was still within two.

Then Kansas went on an 8-0 run that became a 19-4 run and it was effectively over.

“We didn’t own up to our identity on the defensive end, which is getting stops, getting deflections,” Coleman said. “They were able to execute on the offensive end, and we didn’t execute well enough.”

Kansas coach Bill Self praised Coleman’s overall game but said, “They may have been the best we’ve downed the ball screens this year.”

Azubuike set screens at the elbows and drew defensive switches, getting paired with Texas guard Courtney Ramey at times. Sims came up high and set screens at the top of the key, 20-plus feet from the basket, and struggled to get back into the action.

It was clear the Texas guards emphasized feeding Sims more. But Smart thought his blossoming star got a little tired towards the end, too. Sims passed up a few one-on-one chances against Azubuike late that led to some missed 3-pointers by the UT guards.

“I think I’m taking a good amount of shots because they’re efficient ones. They’re easy buckets,” Sims said. “I’m just trying to stay positive and play within the system. Yeah, just trying to get other guys open, too.”

There wasn’t much anger afterwards, either. Just the sense that the Horns are on to the next one. Texas returns home to face Texas Tech on Saturday and No. 1 Baylor on Monday.

“We know what it takes,” Coleman said. “Now, we’ve got to focus on Saturday. We’ve got two home games in a row against really good opponents. It’s a lot of opportunity to capture those and just rise.”

Thirty years ago: Texas-Arkansas, Strollin’ Nolan and the technical foul that was never called

Signing Day Q&A: Tyler’s dynamic Kitan Crawford could be a man of many face masks for Texas