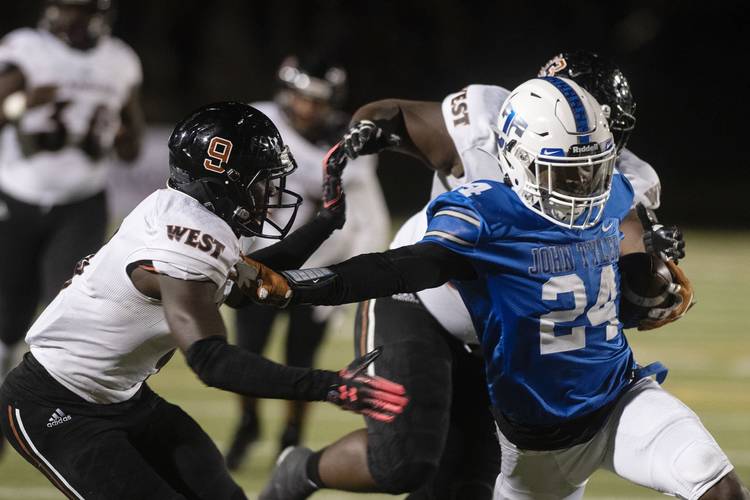 TYLER — Chances are, Kitan Crawford is the only Texas football signee that knows the difference between TIG- and MIG-style welding.

He’s likely the only cornerback among the nation’s top-ranked defensive players that knows anything about welding at all.

This may be going out on a limb, but Crawford’s also probably the only one currently working on his 30-hour OSHA certification for workplace safety.

“Growing up, I used to tell my mom that I wanted to be an architect and just build stuff,” he said. “I played with Legos all the time, so I like to build and figure things out. I just fell in love with welding, really.”

Yes, Crawford is the nation’s ninth-ranked cornerback prospect for the 2020 signing class, according to 247Sports’ composite ratings. The 5-11 speedster was sensational during his time at Tyler John Tyler, transforming from a swift running back into an Under Armour All-American at corner.

Crawford is listed at No. 38 on the American-Statesman’s Fabulous 55 recruiting list. He projects as a dynamite corner for the Longhorns. He’s fast, he’s athletic, blah, blah, blah.

To find Crawford on a random Thursday, you’re wasting time prowling the high school. You can find him about 2.5 miles down the road at the Tyler school district’s Career & Technology Center, a spectacular building located on Earl Campbell Parkway.

The CTC, as it’s known locally, was part of a $160.5 million bond package in 2013. The building opened in 2015 and offered real-life skills training for high school juniors and seniors. The CTC offers certificate-training programs in things like automotive repair, cosmetology, fire training and, of course, welding.

“It’s tremendous. Tremendous,” welding instructor Jeff Dean said. “These are our young people who are going to help run our society as we get older. It’s a big key to success. Puts them in line to do better things quick.”

Crawford’s welding class is currently working on an octagon-shaped barbecue smoker, one that sets on a cart and will ultimately be sold as a class fundraiser.

“After we finish that, we’re going to cook for everybody in the CTC,” Crawford said. “It’s about eight-feet long. You want to see it?”

Last week, Crawford led a quick private tour of the welding shop and then expanded it to the entire CTC. For someone who friends call “Shy Guy,” Crawford has no problem branching out. It takes a special confidence to play defensive back at Texas, too.

“When you meet him and talk to him, you can tell there’s a lot more than just an athlete,” CTC teacher Josh Culpepper said. In his class, Culpepper has organized a “Shark Tank” style contest where Crawford and his classmates have to present entrepreneurial ideas to school officials.

“He’s thinking about the future and where he’s going to be in four years when he’s done playing football at Texas,” Culpepper said of Crawford.

The following is an extended interview with Crawford about signing with Texas. It was edited for length and clarity.

Tell me about growing up in Tyler.

Tell me about the CTC. Why come here instead of John Tyler High School?

Last year, I used to come here for seventh and eighth periods, because I used to have a block period for welding. You know, that’s my career path — welding. I’m over here all day now. I go back to John Tyler to finish out the day. Seventh period is office aide. Eighth period is track practice. Mostly all my classes are over here, like economics, pre-cal, welding, of course.

I know you’re into track. How do you feel about the 100 meters?

Last year, I had a teammate, Caleb McMiller. He was No. 1 in the state and I was No. 2, and we would go at it. My fastest time in the 100 was 10.4. I ran that at the Lufkin district meet. I didn’t go to state. We were at (the UIL regional meet) and I had a bad start and just didn’t go. I was only a junior last year, so hopefully I can make a state run this year.

I don’t think football athletes understand the value of running track. Have you always done that?

Oh yeah. All the way back in middle school. Back then, we could run five events. So they’d stack me up with high jump, long jump, the relays and one individual event, which I think was the 100.

So are you doing any relay events this year?

When did you realize you loved football?

Probably in Pop Warner. I just love the feeling. It gives me chill bumps when I break out. Mainly when I was growing up, I never played defense. I didn’t play any defense until my junior year. I was mainly an offensive guy, playing running back my whole life. But I fell in love with it. The energy, the feeling, it’s something I just fell in love with.

It looked like you had some awesome games at running back. But why do you think defense is where you’ll play in college?

OK, let’s back up. Did you have college recruiters recruit you as an offensive player?

Yes, sir. Some at both positions. Memphis recruited me as an athlete. Tennessee actually was recruiting me as an offensive player, but the coach was a defensive coach, so he wanted to recruit me at corner.

What did you like about Texas? What gave the Longhorns points or took away from other schools? How did you weigh it?

I took visits, and they were good. But when I took my official visit to Texas, I mean, I’ve always been a little Texas fan. Tom Herman and the coaches were so welcoming. It just felt like family there, really. They were so honest, so real. I really just fell in love with the University of Texas.

A lot of guys do form relationships with their recruiters. What did you make with all the staff changes at UT?

I was talking to my mom, and we had a feeling that my DB coach might get fired. I was talking to my mom and said, ‘Even if my coach gets fired, I’m not going to de-commit.’ Coaches get fired and hired. I’m going there to get my education and hopefully get to the next level. I didn’t see that coming, really. I mean, I saw it coming, but didn’t think it would happen.

Herman told reporters before the Alamo Bowl that his message to recruits was that you probably aren’t going to play for the same position coach your whole career. I’ll be honest, I was stunned that he was so open about that. Because it’s totally true.

I liked that about him, too. He was open and honest. He’s never going to hold back something. He’s going to tell you the truth. I really like that about Herman. I feel like more coaches should really do that. Most coaches tell recruits what they want to hear just to get them there. There’s something about Tom. He’s honest.

You’re coming in eyes wide open to how this is a business. Everybody in that room is expected to perform at a high level. Or they’ll find somebody else. What do you think of that? Do recruits understand that?

I really think they don’t understand that. A lot of people have the opportunity to go play football, but for me going from high school to college, it’s really a big change. Now that I know it’s all about business and if you don’t handle your business, it’s a no-go.

I just wonder if guys really understand that.

Some do, but a lot of people don’t. It’s part of being mature and becoming a man, really. It’s about handling your business. That’s what I’ve talked with my mom about. Don’t focus on all the parties and all that other stuff. I know I’m probably going to go to one or two parties. But focus on the schoolwork and graduate. That’s all she wants, is for me to graduate. That’s the focus.

So tell me about your name. Is it really just your mom’s name (Natika) spelled backward?

That’s it? That’s the whole story?

I really didn’t like it at first, growing up. People pronounce my name wrong all the time. They’ll say Kitten or Key-Ton. Dang, I tell you my name every day, and you get it wrong every day. It’s annoying, really. But it’s a blessing. It’s a unique name to me, and it’s different. I love it. It’s pronounced “KEE-tan.”

I’ve asked this to guys from smaller town. It’s not necessarily pressure, but do you feel almost like, ‘I gotta get outta here. I’ve got to make it’?

I say that every day. I posted on social media this thing that said I was ready for college. I just gotta get out of here long term. I don’t want to say there’s a lot of negativity. But Tyler is just not for me, really. Where I’m going, Austin, I mean which would you choose? Austin or Tyler?

What do you think Texas is getting from you?

Just 100%, really. That’s what I’m here for — to do my job. I’m just anxious. I love the game, love football and ready to play, really. I want to play. So I’m going to do everything I can do to play.

Do you fully grasp the position you’re playing? You’re out there on an island with 100,000 watching. And they’ll let you know if it doesn’t go right.

How do you handle that?

It’s just a brush-off. Somebody who hasn’t played football, you just brush it off.

Do you see yourself contributing next year? Redshirting? A starter? A four-year starter?

I’m not for sure yet. Being redshirted, you get to learn the playbook and get bigger and stronger. But really, I just want to come in and help the team.

What’s the one thing you’d want Texas fans to know about you?

I want to say I’m shy. But it takes a lot for me to warm up, really. I don’t want to say I’m anti-social, but I’m a really chill guy. They call me Shy Guy at school. But I work hard, though.

You sound just like Keaontay Ingram. Maybe it’s an East Texas thing. He works hard, does his thing but does not want to be the center of attention.

Yeah, that’s just not me. I know sometimes you have to step up and be a leader. I guess it’s a part of growing up. I’m going to have to come out of that soon.