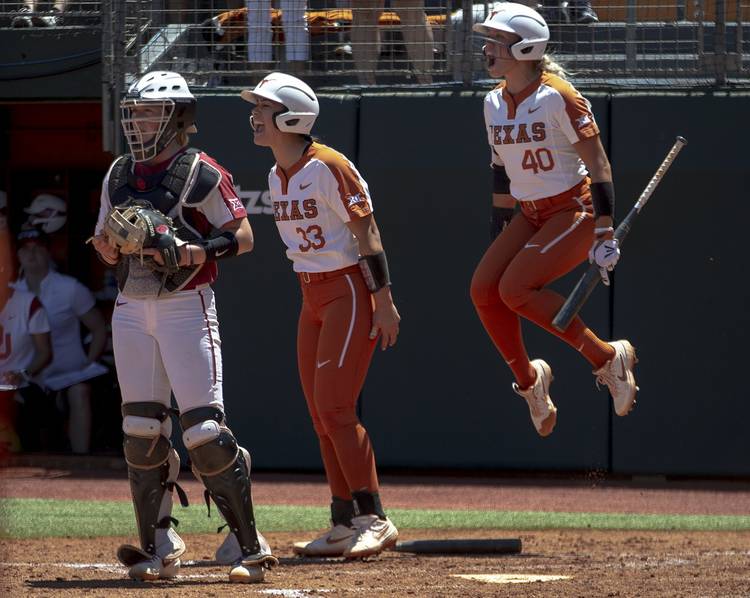 Fans should notice a few changes around McCombs Field when Texas opens its softball season on Thursday.

The installation of a new 24-by-42 feet wide videoboard has been completed. The ongoing construction of the program’s player development facility will cause some chaos and confusion, and because of the construction, the Longhorns will use the first-base dugout and share a bullpen this season.

On the field, star pitcher Miranda Elish will wear a mask after a “freak accident” cut short her junior season. There are five new freshmen on the roster, a new hitting coach and UCLA transfer Colleen Sullivan, who plays catcher and first base. Former catcher Mary Iakopo, who caught every pitch last season, will start at third base when Texas opens against Wichita State on Thursday in the Texas Classic.

Expectations have also changed. Texas, which went 46-17 last season and advanced to the NCAA super regionals, is ranked No. 6 in the country, its highest preseason ranking since 2006.

“I think we’re mainly ignoring the rankings just simply because its preseason and they really don’t matter at the end of the day. It’s what you do on the field,” said Janae Jefferson, UT’s All-American second baseman. “Just because people rank us higher, we can easily fall down, but we don’t plan to at all this season.”

There are plenty of reasons to be optimistic. Jefferson is one of seven players who logged at least 100 at-bats last season, and all-conference catcher Taylor Ellsworth is back from a hand injury. Texas retained 82.3% of its runs and 89% of its RBIs production from 2019.

Texas also has an established 1-2 punch in the pitcher’s circle.  Sophomore Shea O’Leary led the country in ERA last season. Elish, meanwhile, went 18-10 with 226 strikeouts and earned All-American accolades for the second time in her career.

“(Elish is) a spark plug. She’s the heart and soul of this team and she looks very good this year,” UT coach Mike White said. “I never like to get too far ahead of myself, but having Miranda Elish on our side is a blessing.”

After nine successful seasons at Oregon, White led Texas to 46 wins — the most for the Longhorns in six years — and fought back from an early loss to win its NCAA regional. That regional triumph made a hero out of Elish, who threw 429 pitches as Texas won four times over two days.

But in the second game of the Alabama super regional, she was struck in the face by an errant throw from Iakopo. “I recovered well and my face is good now,” Elish said.

She missed UT’s season finale, an 8-5 loss to Alabama in the super regional’s decisive game. The loss prevented Texas from reaching the Women’s College World Series for the first time since 2013.

“Coming up short to Alabama, that kind of bugged us a little bit,” Jefferson said. “Now, this year, we’re really expecting to go out there and definitely make it to the World Series this year.”

To open its season, Texas will host both Wichita State and Maryland on Thursday. Over the next three days, the Longhorns will play four more times against Lamar, Colorado State, Wichita State and Texas A&M-Corpus Christi.

Only one of UT’s six season-opening games will be played against a team that reached the NCAA tournament in 2019. But the Longhorns will be tested soon. On the schedule are non-conference battles with No. 1 Washington, No. 2 Alabama and No. 4 UCLA. Texas also will travel to No. 3 Oklahoma for its conference-opening series in mid-March.

“There’s so much potential that this team has,” Elish said. “I’m so excited to see how we do game-by-game and where we end up at the end of the road.”