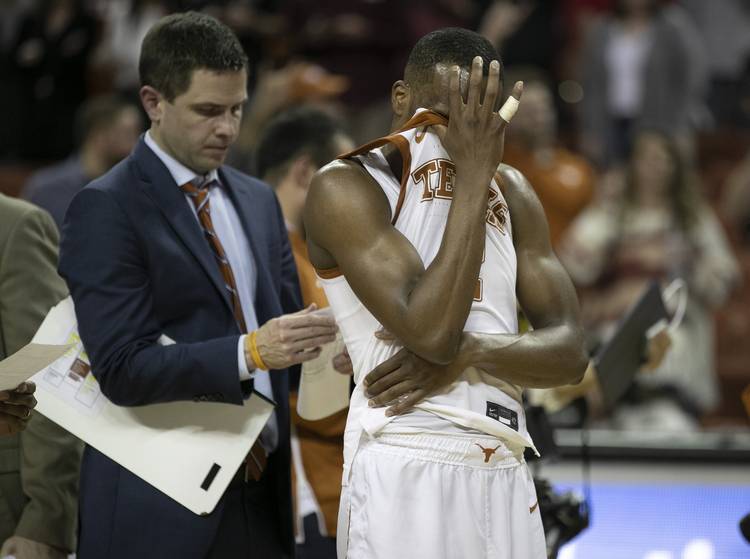 That’s what happened last Monday in a loss against No. 3 Kansas. And it happened yet again Saturday at home to Texas Tech.

The Longhorns ran up a 16-point lead in the first half only to watch it slip away in the second as the Red Raiders came from behind to win 62-57. The announced crowd of 12,887 fans had about a 70-30 split at the Erwin Center, but there was no doubt those with their “Guns Up” made more noise.

If there is a coaching change at the end of the season, this will be the game Texas fans point to as the beginning of the end. The Horns (14-8) are now 4-6 in Big 12 play.

“As a coach, your job is to set the right example for your team,” UT coach Shaka Smart said. “It’s a gut punch, for sure. But if I don’t respond, can’t expect our guys to respond.”

Texas lost both Kai Jones (left ankle) and Jase Febres (left knee) to what appear to be serious injuries. Both will be evaluated Sunday, but it’s highly unlikely either will be cleared for Monday’s home game against No. 1 Baylor.

Normally, Smart has no problem with Coleman taking command. The veteran junior guard had 17 points on 8-of-19 shooting and essentially carried the Horns after halftime.

Trailing by one, Coleman drove down the left side and tried to get up a shot off the low block. Here came Holyfield, rotating from the opposite side. The 6-foot-8 senior blocked it clear out of bounds.

“We’ve just got to execute better down the stretch. I’ll take ownership on that,” Coleman said.

After Texas called timeout, the Horns ran the same play again. Coleman came down the left side on a similar action. Again, here came Holyfield, who didn’t block it as hard the second time. The ball went to Tech’s Davide Moretti, who got fouled and hit two free throws.

Then, to finish things off, Coleman got loose for an attempted runout and got blocked again — a third time by Holyfield, who just used a half-hearted left hand to swat this one away. Again, Moretti got fouled and hit two free throws, putting Tech up by five with eight seconds left.

“Those blocks are major,” Tech’s Jahmi’us Ramsey said. “I don’t know if I’ve ever been more happy for defensive play, personally. But we watched the tape; I was pretty happy. That was big.”

The Red Raiders (15-8, 6-4) came in laser-focused on stopping Jericho Sims, and they did. Texas’ athletic big man got into foul trouble and was a non-factor, getting just two points on two free throws and taking only two shots all day.

All Smart has talked about for weeks is getting Sims double-digit shot attempts. At every practice, he stresses the importance of “paint touches” and how the offense must go through Sims. Against Tech, it was as if all of that meant nothing.

“There was a couple of times our guys were imploring him to get big and demand the ball,” Smart said. “It wasn’t his best day.”

Said Beard: “We were fortunate in a lot of ways, but there’s no doubt about it, he’s a focal point of our game plan. He’s a special player.”

With Sims snuffed out, someone had to pick up the scoring load. That was Andrew Jones in the first half. Jones had 16 of his team-high 18 points before the break and scored on one wicked trick shot that might land him on ESPN’s “SportsCenter.”

Texas went on a 14-0 run in the first half and eventually ran up a 16-point lead with 4:42 left. Andrew Jones was throwing it in from everywhere. Kai Jones scored on an impressive up-and-under move. Courtney Ramey’s bucket gave the Horns a 31-19 lead at the break.

Then the second half began. Just as Kansas did last Monday, Texas Tech started fast. Kyler Edwards scored, and Ramsey buried a 3-pointer and scored again. Just like that, Tech was back within seven.

Then Kai Jones went down with 18:39 left in the game. Minutes later, Febres went down on what looked like a non-contact situation. Both players had to be helped off the court by teammates, and both went to the locker room.

Forward Gerald Liddell (back) is already sidelined for an extended time. At least the Horns got Kamaka Hepa (ankle) cleared to play against the Red Raiders. Hepa had five points and two rebounds in 18 minutes.

Moving forward, the Horns have no choice but to put this wretched week of out of their minds, just as they’ve done numerous times before.

“Just have short-term memory,” Andrew Jones said. “Focus on what we can control and try to be the best versions of ourselves.”

Everywhere you look, pressure is building around Texas men’s basketball