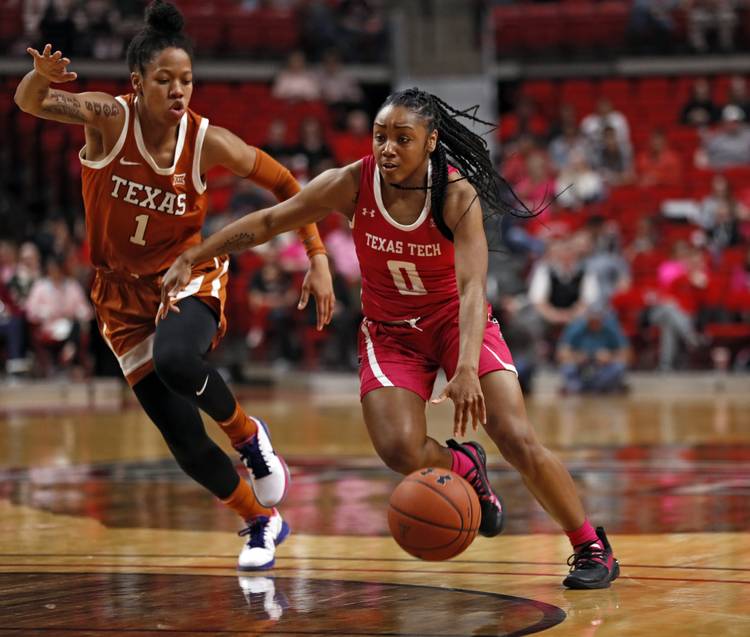 There’s little doubt the Texas Tech women’s basketball team has returned to a competitive state in its rebuilding effort. No longer are the Lady Raiders big underdogs every time they hit the court.

But there’s a difference in being competitive and having the ability to end a 13-game losing streak to a traditional rival. Texas Tech had a chance to do just that Sunday afternoon at United Supermarkets Arena, but found out it still has a ways to go to turn the series with the Longhorns into the rivalry it once was.

What was missing Sunday was the Lady Raiders’ ability to take care of the details, specifically in turnovers and rebounding. The inability to do so allowed UT to take control in the second half and pull away for an 81-66 victory.

“Our team fought really hard in the first half and it was nice taking the lead into halftime,” Lady Raiders coach Marlene Stollings said. “The second half we fell off and I didn’t think we matched their intensity well. Turned the ball over and didn’t rebound, and those two things you have to do well when you’re playing a top-tier team like a Texas … Clearly some things we could have better that we control, like taking care of the ball and rebounding.”

The win allows the Longhorns (15-7, 7-3 in Big 12) to sweep the season series from the Lady Raiders (14-7, 3-7), their 14th win over Texas Tech, while preventing Texas Tech from making a much-needed climb in the league standings.

Texas’ defense kickstarted its offense late in the second quarter, cutting an 11-point Texas Tech lead to one at halftime. The Longhorns then used a 10-0 run early in the third quarter to force the Lady Raiders into chase mode, but they weren’t consistent enough with the basketball to fully recover.

Texas Tech finished with 23 turnovers, the second most for the team this season and the most in a Big 12 Conference game this year, while Texas held a decisive 43-32 rebounding edge, including 16-9 on offensive rebounds. Texas also took advantage of offensive aggressiveness from Sug Sutton and Lashann Higgs, who combined for 34 points and helped the Longhorns go 19 of 26 from the free-throw line compared to just 5 of 7 for Texas Tech.

“Even though we made the one run (in the first half) and they answered it, I thought that changed the game for us,” Texas head coach Karen Aston said. “That sort of loosed us up a little bit. We’ve been off nine days so I kind of expected a little game rust, and that’s sort of what it looked like early in the game. But I thought that the energy defensively changed and even tough we didn’t take the lead I thought it changed our aggressiveness in general … I thought our wheels got turning better in the midst of that.”

With Texas’ wheels turning, the Lady Raiders struggled to find the brakes to slow the Longhorns down.

Trailing 54-45 with just over five minutes to go in the third quarter, Texas Tech made a run at the Longhorns. Brittany Brewer scored 10 of her game-high 23 points (to go with 12 rebounds) in the final 5:10 of the third quarter, and Texas Tech pulled to within a point three times in that span.

But a putback by Jada Underwood and a long jumper at the buzzer by Sutton pushed “the lead back to five at the end of the quarter. A 3-pointer from Lexi Gordon sliced the lead to two for UT, which then put the game away with an 11-2 run, eight of those points coming from Sutton, who had a team-high 20 points.

Texas Tech committed eight of its 23 turnovers in the fourth quarter, while Texas went 14 of 18 from the free-throw line in the second half.

“We let the details slip the whole second half, and that shouldn’t have happened,” Brewer said.

The Texas Tech defense did a good job for most of the first half in not letting UT’s two forward, Charli Collier and Joyner Holmes, to get going like they did in the first meeting between the two teams when they combined for 40 points and 20 rebounds.

For the first half, Collier and Holmes combined for six points and five rebounds, with Holmes picking up her third four with just under 3 minutes left in the second quarter.

But once Texas adjusted with a four-guard lineup – similar to what the Longhorns ran in Austin, Aston said, their energy and defense seemed to pick up, making the difference in the game.

“We’ve got to be able to sustain our momentum and handle momentum shifts better,” Stollings said. “It’s a game of runs, and we know that. When they make a run at us we have to be able to handle it better to stop it, and you can’t let it turn into something more than it should be. We’ve got to get that mentality to where we fight back, pop them back. When the game’s really hard, that’s the growth piece we still have to get to, to be able to handle those moments more maturely.”