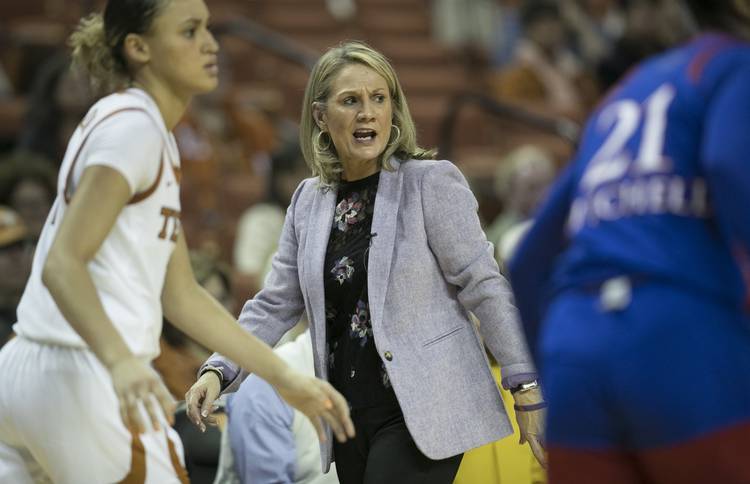 Karen Aston coaches the UT basketball team during a game against Kansas at the Erwin Center on Jan. 22, 2020. [JAY JANNER/AMERICAN-STATESMAN]

With 5:17 left in the second quarter on Sunday, Texas found itself starring at an 11-point deficit at Texas Tech’s United Supermarkets Arena.

Coming off a 64-44 stumble against Baylor, the comeback in Lubbock gave Texas (15-7, 7-3 Big 12) its seventh win after a loss this season. It was also UT’s second rally of significance in its last four games; the Longhorns trailed by eight at the beginning of the fourth quarter in a 61-56 win at Oklahoma State on Jan. 25.

“We’re resilient and we have a lot of experienced players that know what it feels like to be down and to come back into games,” Sutton said. “I think our upperclassmen are doing a really good job of keeping the team together.”

There are different ways of assessing how Texas has handled adversity.

Glass half-full? The Longhorns are, as Sutton put it, resilient.

Glass half-empty? Texas wouldn’t need to rally if it wasn’t down in the first place.

On Monday, head coach Karen Aston’s glass was more than half-full. She said she isn’t frustrated since she was satisfied with the Longhorns’ effort and preparation. Aston added that she wasn’t downplaying the competition that UT is seeing in the Big 12.

“Everyone is scratching and clawing in our league to get to that place where they have a chance to go to the NCAA Tournament,” Aston said. “It would be really egotistical to say we’re going to walk into every Big 12 game and we’re going to take the lead. That’s stupid, it doesn’t happen in our league.”

There appears to be a disconnect with how Aston and the national media view the conference. Over the past three weeks, No. 2 Baylor (21-1, 10-0) has been the only ranked Big 12 team. TCU (17-4, 8-2) received the 27th-most votes from the AP’s panel of 30 voters this week, but no other league school appeared on a ballot. (The ballot submitted by the American-Statesman ranked Baylor second and TCU 18th).

But in terms of RPI, the Big 12 trails only the Pac-12 and Big Ten, according to RealTimeRPI. The SEC boasts the fourth-best RPI yet still has six teams in this week’s Top 25 poll. During the Big 12-SEC Challenge in December,the Big 12 won eight of the 10 matchups.

“It’s being completely disrespected,” Aston said of the Big 12. “It has everything to do with maybe the margin of victory that Baylor has over the majority of the teams (27.5 points). But we have some quality wins, as do some other teams in our league. … Based on the SEC Challenge, it’s hard to understand why we don’t have two or three teams ranked at this point.”

Last year, four Big 12 teams made the NCAA Tournament and Baylor won the national championship. Aston predicted that four or five teams from the conference will go dancing in March. Kansas State is the only Big 12 team with a losing record. Seven Big 12 schools currently boast a top-50 RPI.

“The Big 12 is seriously no joke this year,” TCU coach Raegan Pebley said in January. “I’m so tired of hearing about people talk about other leagues right now.”

Situated third in the Big 12 standings, Texas will look to solidify its postseason résumé this week. Texas hosts Iowa State (14-8, 6-5) on Wednesday before traveling to Kansas (12-10, 1-10) this weekend. Texas has beaten both this season, but the Cyclones earned a nine-point win in Austin last year.