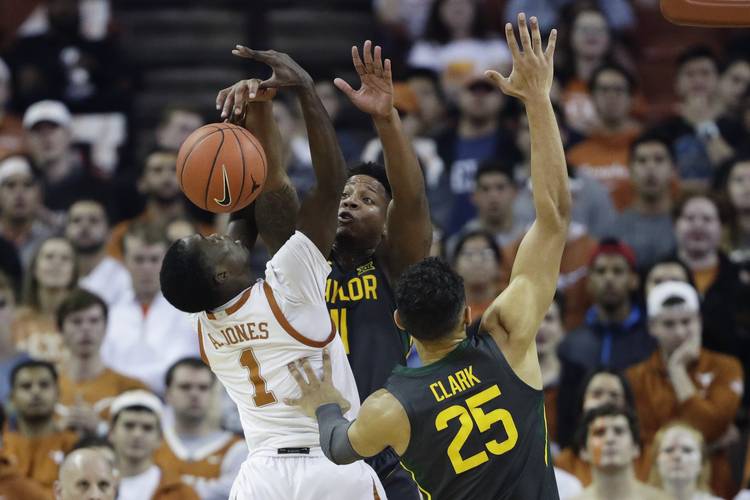 At a place like Texas, perception is always reality. Where and how you either win or lose always matters.

It’s OK to drop a road loss during the Christmas break at Providence. Losing by 38 looked bad in mid-January, but at least it was on the road at West Virginia.

But now it’s February, football season is over and everyone is paying full attention.

Watching Texas Tech fans go crazy inside the Erwin Center last Saturday was tough for Texas fans to stomach. Two days later, top-ranked Baylor came down Interstate 35 and won 52-45. At least Bears fans had the courtesy to keep their cheering to a minimum Monday night.

That 44-point debacle and now this 45-point effort are UT’s two lowest-scoring outputs in coach Shaka Smart’s five seasons. The Horns went 11 for 26 from the foul line in those two losses as well. They are now 0-11 all-time against teams ranked No. 1 in the country.

“I thought Texas really competed,” Baylor coach Scott Drew said. “I thought Shaka had them ready to play, and they got their share of 50-50 balls.”

Drew was throwing bouquets compared to ESPN’s Fran Fraschilla, who was throwing fastballs on the “Big Monday” national telecast, openly speculated about a coaching change. “I’d be be shocked if they get a guy like Chris Beard to leave Texas Tech,” he said.

“There’s no question that Texas has been in the past about excellence,” Fraschilla added. “And let’s be honest, most of their major sports are not very good right now.”

The Longhorns’ football team went 8-5 last season and won the Alamo Bowl, not 7-5 as Fraschilla said. The women’s basketball team is third in the Big 12 standings. The baseball team made it to the College World Series two years ago, so it’s not “horrible,” as Fraschilla stated.

“That’s not Texas athletics,” he added. “That’s just a fact.”

With seven games left in the regular season, there’s a perception Smart won’t be able to pull this team out of this all-too-familiar rut.

“Absolutely, I think we have what it takes,” Smart said. “But there’s a difference between knowing what to do and going and doing it. We don’t have a choice. You know, it’s Iowa State on Saturday. I told the guys afterwards, we talked going into the season about what we want to do and where we want to be. There’s never been a more important game than this.”

Monday was a must-win affair, as was last Saturday’s matchup against the Red Raiders. As will Saturday’s date with the Cyclones, who are now without their best player Tyrese Haliburton, who has a wrist injury.

Baylor (22-1, 11-0) was ready at tipoff. UT’s Jericho Sims went up for a dunk on the opening possession, but Baylor’s Freddie Gillespie went up and stuffed him cold. The Bears went the other way, and MaCio Teague buried a 3-pointer.

Texas found its footing and got to within two when Courtney Ramey hit a scoop layup. Royce Hamm Jr. had a sensational dunk as the Horns were focused on going inside more.

Sims had to contribute more than he did against Texas Tech (two points, four rebounds). The 6-9 behemoth had seven of his game-high 14 rebounds before the break and was active all over. “Can I say it? We enjoy watching Jericho’s highlights,” Drew said.

It was still a two-point game with 13:09 remaining after Sims hit the first of two free throws. That’s when the Bears carved out some breathing room. Devonte Bandoo hit a 3-pointer that sparked a 13-0 run. Texas missed nine straight shots and didn’t score a single point in more than five minutes.

“I think we missed a lot of good shots,” Ramey said. “I feel like we can take those shots back, we would’ve tried the same shots.”

Once again, Sims didn’t get enough touches down the stretch. He had a dunk with 15:28 remaining, but wouldn’t get a single shot attempt the final 15 minutes, an incredible feat considering he is UT’s most efficient offensive player.

“The guards who get switched on to me is fronting me hard,” Sims said, “and they’re just helping from the back side, so it’s hard to seal them up and get a pass toward the basket.”

Having injured guard Jase Febres (left knee) and forward Kai Jones (left ankle) sure would’ve helped. The Horns are likely to be without both players for an extended period. Smart said Jones just had a sprained ankle, but with Febres, the coach said the junior is “still being evaluated.”

In Texas parlance, that usually means the athlete will be out an extended period, if not lost for the rest of the season.

If the Horns can’t figure things out quick, this season will be a lost cause anyway.

“We’ve still got seven to eight games left on our schedule,” guard Matt Coleman III said. “You got the (Big 12) tournament. There’s still life. You know, light at the end of the tunnel. We’ve just got to grab hold of it. Step up to the challenge.”