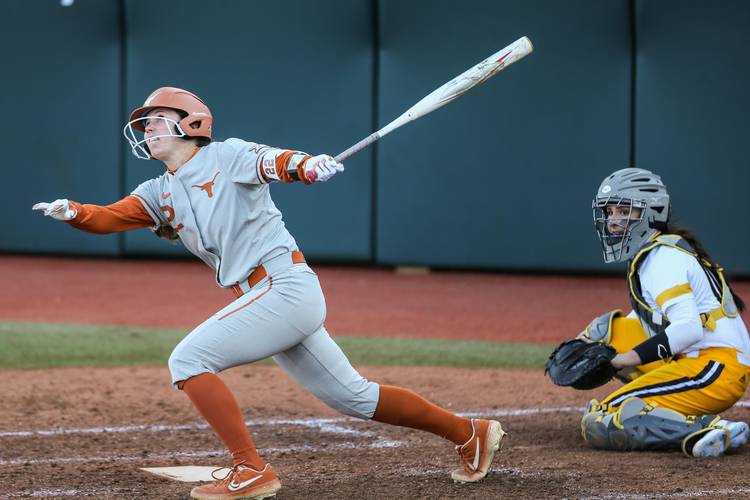 He pointed to a small hoop that had been set up in the Longhorns’ dugout. So Hathaway celebrated her slam with a slam.

The senior outfielder’s homer was the first of seven that Texas hit through its first six games. And each one was punctuated by a dugout dunk — four of them from Miranda Elish alone.

The new celebration wasn’t the only thing worth crediting Singleton, in his first season with the Longhorns, out of last week’s Texas Classic. The sixth-ranked Longhorns scored 78 runs in six games, all run-rule victories against Wichita State, Maryland, Lamar, Colorado State and Texas A&M-Corpus Christi. Texas is hitting a nation-leading .486, and 17 of the 18 players who bat produced at least one hit. Elish, a senior pitcher, earned both Big 12 and national acclaim after going 9-for-11 with four homers and 17 RBIs.

“I just think we looked like we’ve been playing for a couple weeks already,” Hathaway said. “We were having a lot of fun. We didn’t back down, we didn’t get comfortable with the score.”

Last year, Texas hit a school-record 91 doubles and ranked 34th nationally in batting average, hitting .302. But after floundering near the end of the season — Texas scored more than five runs only twice in the 20 games leading up to the NCAA tournament — the Longhorns parted ways with hitting coach Kerry Shaw.

And as he searched for Texas’ fourth hitting coach in a five-year span, an unconventional route took UT coach Mike White to Pensacola, Fla.

At the time, Singleton was the hitting coach for the Pensacola Blue Wahoos, the Double-A affiliate of the Minnesota Twins. He had never coached softball before, but he did work a camp at Florida State and had previously weighed an offer to join Ken Eriksen’s staff at South Florida. Introduced to White by Florida State assistant Travis Wilson, Singleton said this offseason’s timeline was “perfect” for a move.

Singleton, 34, was attracted to the idea of raising his family in Austin. In his eyes, the lifestyle of coaching in college is less taxing than in professional baseball. “Every time I’m around (softball), I loved it,” he said. “Being here just solidified that thought.”

White has long embraced the use of technology in coaching and was attracted to Singleton’s mutual embrace of that concept. This season, Texas has used programs like Blast, a mobile app that analyzes a hitter’s swing through sensor-based metrics, and Rapsodo, a portable video device that similarly breaks down a swing. And Singleton relies on good ol’ fashioned video, too.

Building relationships, though, is the foundation to Singleton’s coaching style. He says that he instructs softball players the same way he would a baseball player, and several Longhorns have lauded their one-on-one tutoring.

Hathaway, for example, said that Singleton has helped her address how she uses her back leg while swinging. Elish noted that he tweaked her approach at the plate.

Junior infielder Janae Jefferson entered this season as UT’s career leader in batting average. But since none of the two-time All-American’s 154 hits had been a home run, getting more power out of her swing has been stressed.

“Throw them at me this year,” she dared.

When asked if he sees himself as a baseball or softball coach down the road, Singleton answered “softball coach.” He’s not the first baseball coach to find a home in softball. This past offseason, Fresno State’s Matt Lisle (Chicago White Sox) and Virginia’s Jake Sidwell (George Washington) left their baseball gigs for assistant coaching positions in softball. Singleton reached out to Lisle for advice during his transition.

Since Singleton has a baseball background, expect to hear the words “launch angles” mentioned a time or two at cavernous McCombs Field. Texas’ 41 home runs last season were its most since 2016, but four of the Big 12’s seven teams hit more. Last season, Singleton’s Blue Wahoos ranked second in the Southern League in homers but also were third in strikeouts.

“My hope is that we see a power surge,” Singleton said. “I won’t care if we see strikeouts go up as long as we see us get on base and hit the ball hard.”

Texas will soon see No. 12 Tennessee and Ole Miss at a Puerto Vallarta College Challenge that starts on Thursday in Mexico. Dates with No. 1 Washington, No. 3 UCLA, No. 9 Alabama and No. 13 Louisiana are on the horizon. And the road to the Big 12 title still goes through No. 2 Oklahoma.

“We know that we’re preparing for Oklahomas, UCLAs and Alabamas,” Singleton said after Sunday’s 18-2 rout of Texas A&M-Corpus Christi. “We’re not going to use this as that same measuring stick. But we did what we were supposed to do so that was nice to see.”

The Dotted Line: Jalen Milroe only half the quarterback equation for Texas in the 2021 cycle