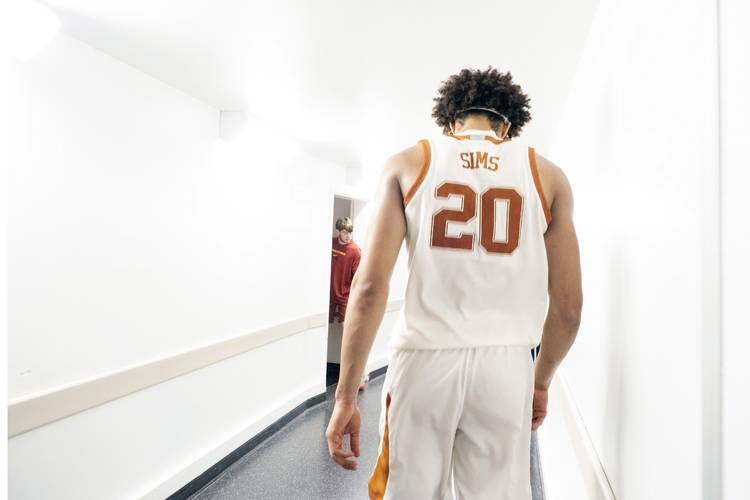 Texas’ road to the postseason got incredibly more difficult Thursday when coach Shaka Smart announced that star forward Jericho Sims has a back injury that will sideline him indefinitely.

Smart did not get into specifics, however those inside the program are concerned this could be a season-ending injury.

Smart would not elaborate on the severity of the injury with reporters on Thursday. However, he did say the athletic 6-foot-9 big man would at least miss Saturday’s game at Iowa State.

“He’s been battling some injuries in that area for quite a while,” Smart said. “He’s been a real warrior, to be honest with you, just the way he’s hung in there. We’ve had to limit him quite a bit practice wise the last couple of months.”

Sims, described by Kansas’ Bill Self as “the best athlete in our league,” is averaging 9.7 points and 8.2 rebounds this season.

Texas is now piling up the injuries in fast and furious fashion. Forward Gerald Liddell (back) was already lost for extended time. Last Saturday, guard Jase Febres (left knee) and forward Kai Jones (left ankle) were both injured in the second half against Texas Tech.

Febres is also likely to be out an extended period as doctors wait for the swelling to subside, Smart said. Thus far, doctors have noticed cartilage damage but no ligament tears. Febres, UT’s 3-point threat, averages 9.4 points per game.

Jones could return soon, although when it still unclear. His injury is considered to be something that just needs time to heal.

With seven games left in the regular season, the Longhorns (14-10, 4-7 Big 12) have almost no margin for error as far as the NCAA Tournament is concerned. It’s long thought that a team with a .500 Big 12 record or better can get in, but Texas still has to play West Virginia at home and go to Texas Tech and Oklahoma.

The Cyclones (10-14, 3-8) are struggling at the moment having lost their best player, guard Tyrese Haliburton, to a season-ending wrist injury. Then, Texas comes back home to play TCU (13-11, 4-7) next Wednesday at the Erwin Center.